Eze was pictured at the game in west London, despite the government placing the country under draconian stay-at-home orders, with only essential trips outside permitted by law.

Police are cracking down hard on those who breach the rules, with some people reportedly even arrested or fined for such small infractions as sitting on benches or leaving the house more than once per day. 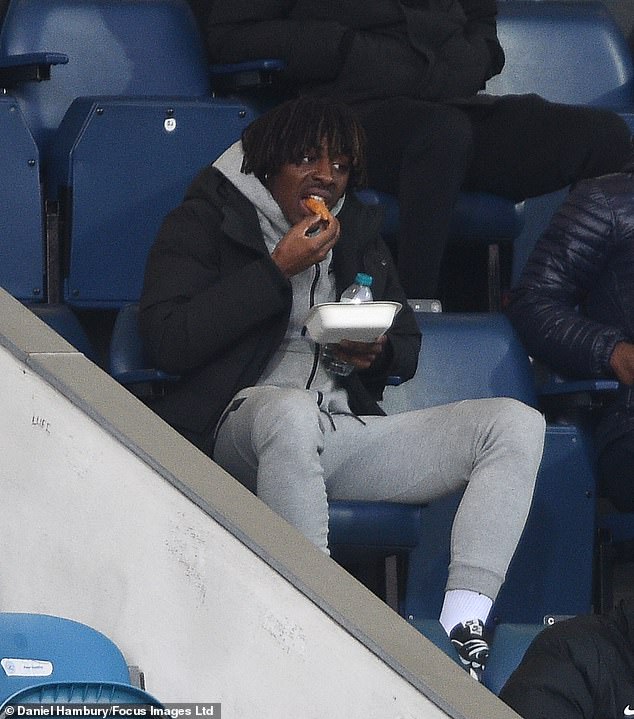 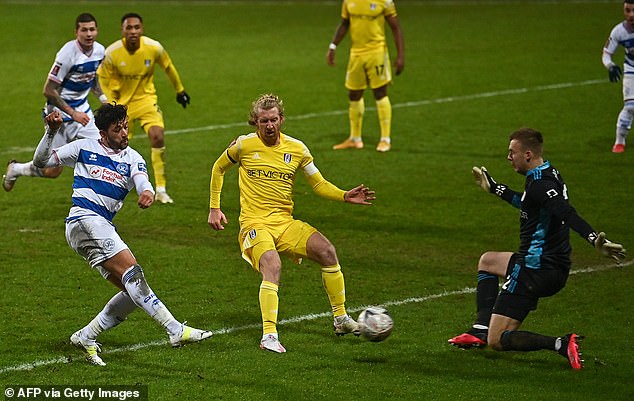 Eze was seen sitting in the stands at QPR, having been invited by the club to join the directors’ box for the day.

He was pictured not wearing a face mask and appearing not to be strictly observing social distancing guidelines, sitting less than one metre away from another guest.

According to PA news agency, the Football Association gave Eze permission to attend the fixture, providing social-distancing rules were adhered to.

But Sportsmail understands the FA are aware of the situation and are scrambling for answers over whether the player was given permission to attend the match or if there has been a potential breach of their rules.

Clubs are allowed to welcome ten guests in the directors’ box during a game, with only ‘essential personnel’ permitted to attend matches. 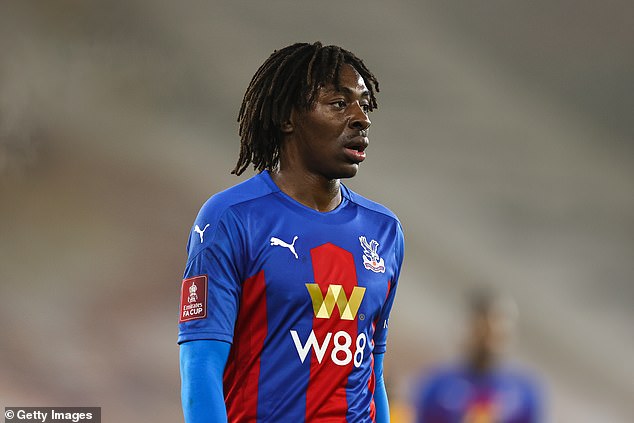 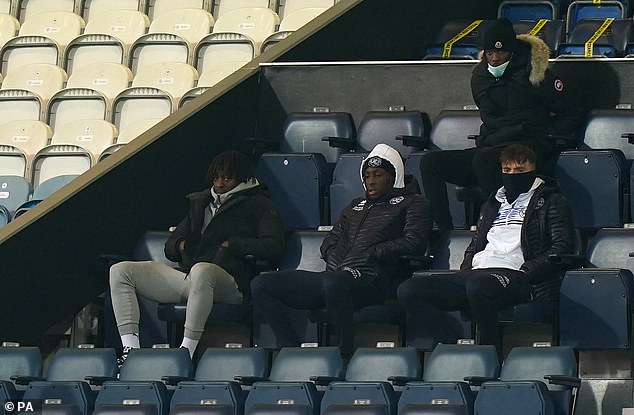 Eze (far left) was a guest of QPR, with the socially-distanced visit approved by the FA

Premier League snoop squads are to be permitted access to dressing rooms on match days, in a move some fear may bring the integrity of the competition into question.

Sportsmail can reveal that top-flight clubs have been sent through ’emergency guidance’ that includes a host of new, stringent protocols, which have raised concerns among some.

Each club has been told that they should allow a compliance officer or match-day co-ordinator to enter dressing rooms on request to ensure anti-Covid rules are being adhered to.

Officials believe that could cause problems, with team news and tactical information at a greater risk of being leaked.

The Premier League are adamant that will not be the case, with inspectors avoiding times when confidential discussions are taking place.

The significant ramping-up of safety measures, triggered by the surge in coronavirus cases and the rapid spread of the new variant, is felt by the Premier League to be a common-sense approach.

Players, managers and coaching staff have been told to avoid handshakes and hugging — particularly with the opposition. Shirt-swapping is now banned, and clubs have been warned  the snoop squads will apply a ‘more robust policy to reporting any breaches’.

Substitutes must now wear face coverings unless they are warming up, along with physios and medical staff.

‘I cannot imagine managers being too happy with having a stranger in the dressing room as they are announcing their team and giving out instructions on the opposition,’ said one insider.

‘We get why measures have to be stepped up but this feels a little unrealistic.’

Clubs on away trips will have to allow officials to inspect coaches, trains and planes, and they have been advised that, if travelling by road, they should use three coaches to allow for social distancing on board.

Premier League clubs have seen security risks tightened on a matchday after outbreaks in several clubs across England.

Top-flight clubs have been sent through ’emergency guidance’ that includes a host of new, stringent protocols, which have raised concerns among some.

Each club has been told that they should allow a compliance officer or match-day co-ordinator to enter dressing rooms on request to ensure anti-Covid rules are being adhered to.

Several fixtures across the Premier League, EFL and FA Cup competitions have been suspended due to these outbreaks.

Earlier this week, the Premier League has revealed 40 new Covid cases in the latest round of testing – more than double the previous week and the highest figure yet recorded.

Asked about Eze’s attendance at Loftus Road on Saturday night, QPR boss Mark Warburton said: ‘I’ve no idea whether he broke protocols or not. You’d have to ask our health and safety officer because that’s above my pay-grade.

‘I want to talk about the game. What other players do in their own time, I can’t comment on that. It’s not my area of expertise. Far from it.’

England Under 21 winger Eze joined Palace from QPR for a £20million transfer fee over the summer after impressing in the Championship with the Hoops.

Palace boss Roy Hodgson this week made it clear to his players that no further breaches of Government coronavirus guidelines will be accepted after captain Luka Milivojevic breached the rules on New Year’s Eve.

Milivojevic issued an apology on Wednesday after his household mixed with Fulham forward Aleksandar Mitrovic and his family.

Hodgson was furious that his captain was caught breaking the UK’s coronavirus rules and that the Serbian would be punished internally.

‘We condemn it, we certainly apologise for it,’ said the Palace manager following Palace’s first match since New Year’s Eve. ‘I’m certain Luka will as well. As far as I’m concerned he should take responsibility for that.

‘It’s an internal matter and we will deal with it, but there’s literally nothing positive I can say on the matter.’

Meanwhile, Mitrovic’s actions came amid a coronavirus outbreak at Fulham which forced the postponement of the Cottagers’ matches with Burnley and Tottenham over the festive period. 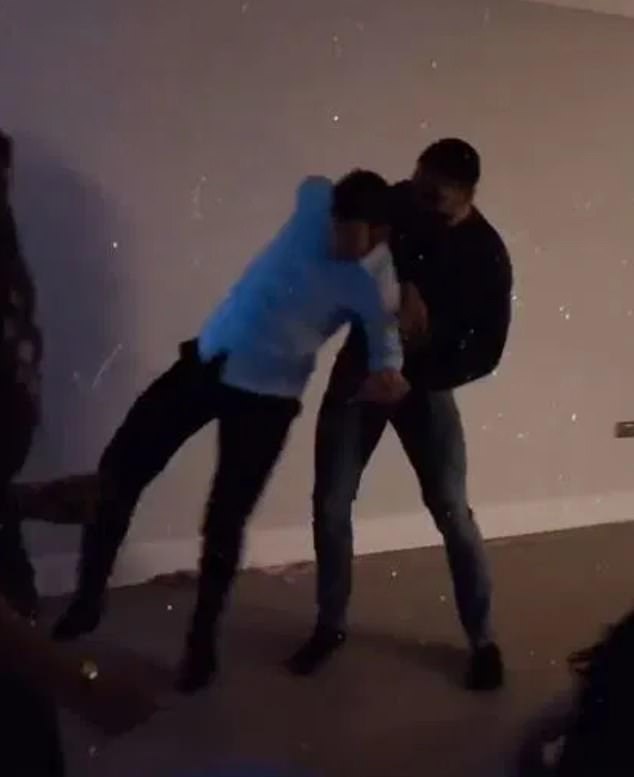 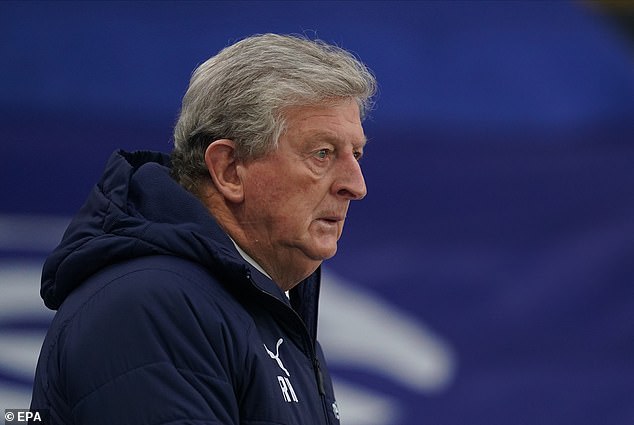 The Serbian duo are not the only top-flight players in English football to have been seen breaking the lockdown rules over Christmas.

Tottenham trio Sergi Reguilon, Erik Lamela and Giovani Lo Celso were spotted celebrating Christmas under one roof with their families – along with West Ham midfielder Manuel Lanzini and his relatives.

Lockdown restrictions over Christmas banned the indoor mixing of households, with Hammers player Lanzini posting an image of their celebrations on Instagram. 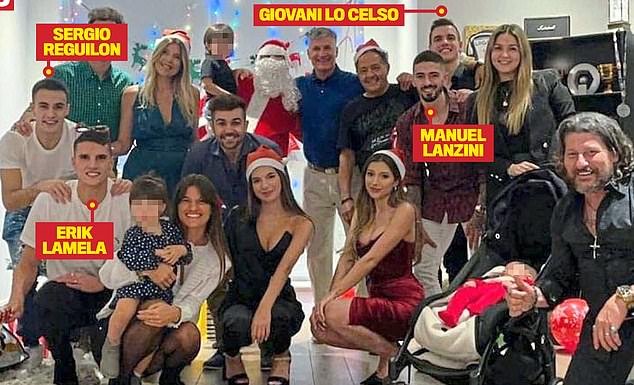 All four players publicly apologised for their actions on social media with the three Spurs players fined by the club and were reminded of their responsibilities.

Tottenham manager Jose Mourinho even gave Spurs left-back Reguilon a Portuguese piglet as a gift as he believed the Spaniard would be spending Christmas Day on his own.

Lo Celso is currently struggling with a hamstring injury so would not have been involved in Tottenham’s on-pitch activities anyway, though Lamela and Reguilon have both been dropped from the Spurs starting line-up since Christmas.

Mourinho mysteriously refused to go into detail as to why Lamela was not named in the matchday squad for last week’s Carabao Cup semi-final with Brentford.

West Ham midfielder Lanzini announced earlier this week that he will be donating to a London foodbank to try and make up for his actions. 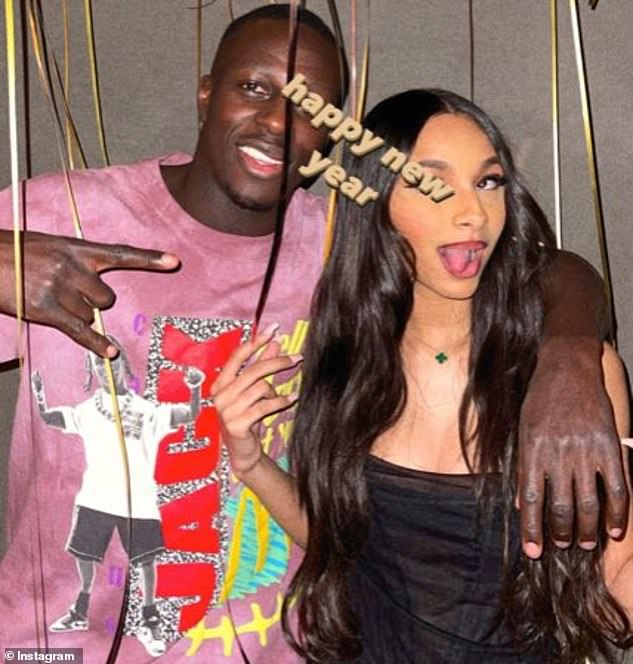 Manchester City are also investigating the actions of their defender Benjamin Mendy on New Year’s Eve after the Frenchman admitted to hosting a party that night.

A spokesman for Mendy said last week: ‘Benjamin and his partner allowed a chef and two friends of his partner to attend his property for a dinner party on New Year’s Eve.

‘Ben accepts that this is a breach of Covid-19 protocols and is sorry for his actions in this matter. Ben has had a Covid test and is liaising with Manchester City about this.’

The player was included in the matchday squad for both of City’s matches since New Year’s Eve, though started each game from the substitutes’ bench.