The Warriors ended their seven-year absence from the finals in emphatic style with a 36-16 demolition of Penrith in arguably their best performance of the season.

After being thumped by the Panthers last month, the Auckland club returned the favour as they ran in six tries to three, with David Fusitu’a grabbing a hat-trick to take his season tally to 21. 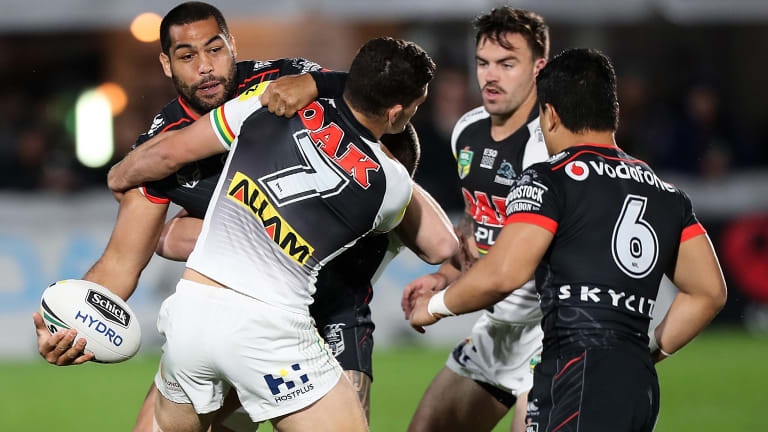 Arms free: Adam Blair slips a ball out the back against the Panthers at Mt Smart Stadium.

But this was a hammer blow for the Panthers, who slumped to their second successive loss under caretaker coach Cameron Ciraldo, dropped from fifth to sixth on the ladder and saw their their top-four hopes all but disappear. Next weekend’s final round sees them travel to Melbourne to face the Storm, a match they must now win while hoping other results go their way to earn the double chance.

It also reduces the slim play-off dream of the ninth-placed Wests Tigers, who need Brisbane to lose their last two games to have any chance of making the top eight.

Hot and cold performances over the last two months left the Warriors' fate on tenterhooks for an extended period but the Panthers never threatened to halt the party for 17,195 supporters. 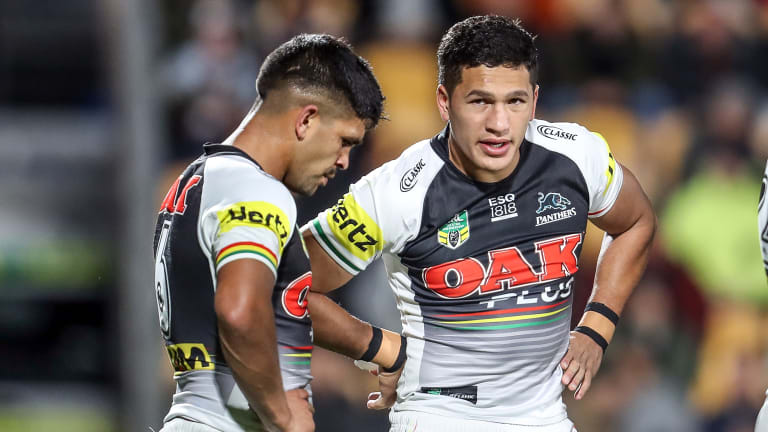 Hopes crashing: The Panthers react to a second consecutive defeat.

Coach Stephen Kearney would have been disappointed with two late consolation tries by the Panthers. But with the Tigers keeping the pressure on after Thursday night's win over Manly, the Warriors rose to the occasion to secure a first post-season appearance since 2011.

Johnson was brilliant in the absence of injured halves partner Blake Green. The star halfback needed to step up and he showed his his intent early, taking a scoot from dummy half in the second play of the game.

He went on to run for almost 130 metres and laid on a try midway through the second half to all but seal the result.

He was well complemented by deputy playmaker Mason Lino, while the foundation was laid by a strong defensive display up until the final 10 minutes.

The Warriors now head into next week's final-round clash at against the Raiders with a chance to book a home playoff by finishing fifth or six, while there is a slim possibility of sneaking into top four.

With so much to play for, Kearney couldn't have asked for a better start as his side shot out to a 8-0 lead.

It took the Panthers almost nine minutes before they had their first set of six as they conceded three-straight penalties to open the game.

Johnson opened the scoring with an easy two points after Lino almost broke the line before prop Agnatius Paasi, of all people, caught Penrith napping on their goal-line to sneak over from dummy-half.

The Warriors were on their game on both sides of the ball.

It was only going to be a matter of time until possession swung and the visitors enjoyed four consecutive sets in the red zone. But the defence refused to break.

They then proceeded to take firm control of the contest with two tries in three minutes. 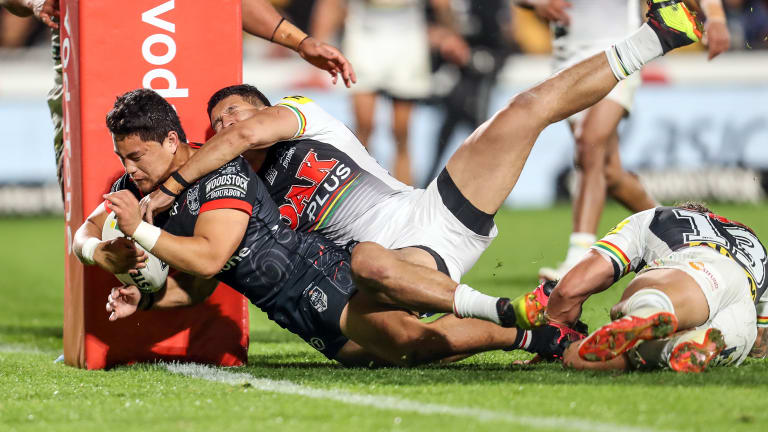 Deputy takes charge: Mason Lino caps a strong performance by crossing near the posts for the Warriors.

Fusitu'a crossed off a slick move to the right, while Lino showed great strength to shrug off Regan Campbell-Gillard and dart over off a Simon Mannering offload.

It was as good as the Warriors had played all season, as they led all the key first-half stats.

But despite their dominance, it was the Panthers who went into the break with the momentum when Josh Mansour pounced on a deflected kick.

How the Warriors started the second half was always going to be crucial following that setback.

They quickly assured the 17,195 crowd that everything would be alright.

It took them just two minutes to restore their advantage after a superb pick-up from Lino led to Fusitu'a's second.

The Panthers are a dangerous attacking side but the Warriors nullified their attacking threats with great line-speed and scramble defence.

They did their best to get Viliame Kikau, who gave the Warriors' right edge nightmares last month, involved but the home team were up to task this time.

Then in the 56th minute Johnson stamped his mark on the contest as he sliced through with a show-and-go.

He almost bombed the try when he tried – and failed – to beat Dallin Watene-Zelezniak on the outside. But his pass in-field found Fusitu'a, who was on the spot all game.

Solomone Kata made doubly sure when he powered over before Waqa Blake and Trent Merrin made the scoreline more respectable for the visitors.

But that could not detract from the home team's performance.

This was the Warriors' night.