Penrith are deep in negotiations to bring Ivan Cleary back to the club from 2021 in a move that would place pressure on Wests Tigers to release him immediately.

Cleary is contracted to the Tigers until the end of 2020 but Fairfax Media can reveal that the Panthers are in the process of offering him a three-year deal from 2021. The development comes as his son, gun halfback Nathan, is poised to sign a contract until the end of 2023 – one that would mirror his father’s tenure should he join immediately. 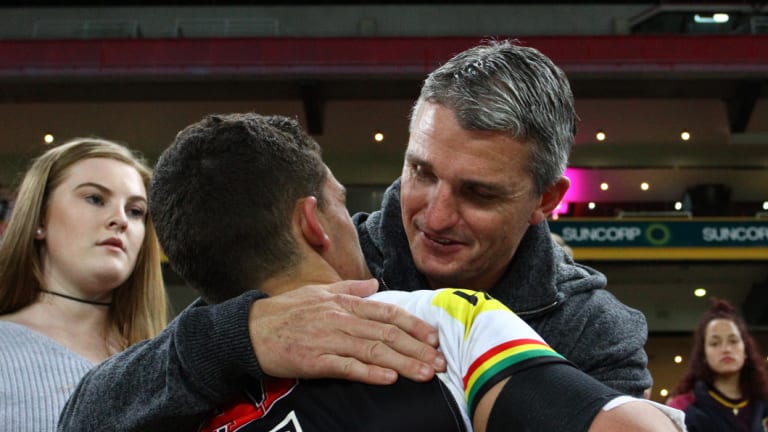 The Clearys have made no secret of their desire to work together and the latest move could result in them again joining forces at the foot of the mountains in the off-season. The family stands to enjoy a $10 million-plus windfall if both Clearys are at the Panthers over the next five years.

The Tigers have every right to force Cleary senior to see out the remainder of his contract after throwing him a lifeline after he was sacked at the Panthers. But the situation will almost certainly become untenable if he has made a long-term commitment to a rival team.

Cleary has done little to douse speculation over his future after it emerged the Panthers wanted him back to replace Anthony Griffin. The former Warriors mentor has refused to take any questions on the issue, having addressed the matter only in a brief written statement after the news broke. The 47-year-old’s mantra at the Tigers has been “on the bus”, but it remains to be seen if the Penrith offer will result him disembarking.

Nathan Cleary had initially outlined his plan to make a call on his future on his 21st birthday, a milestone he reaches in November. However, he told Fairfax Media last weekend that he was keen to fast-track negotiations, hinting “It will be very, very hard to walk away” from the Panthers. Penrith supremo Phil Gould indicated a deal was imminent on the Channel Nine's 100% Footy  on Monday night and deal is expected to be formalised and announced by the end of the week.

The Tigers had hoped a Cleary family reunion would occur at Concord and were preparing to make a big-money play once Nathan hit the open market on November 1. However, it now appears they could be without both Clearys in a matter of weeks if Ivan signs with Penrith and requests an immediate release or is asked to move immediately.

The Tigers will likely seek compensation if Cleary wants out, either through player transfers or a financial settlement. Regardless, there are plenty of  coaching replacement options. Premiership winners Michael Maguire and Des Hasler are club-less, Trent Barrett is on borrowed time at Manly, Wayne Bennett could consider longer-term options with only a one-year deal at Brisbane, while Kevin Walters, Laurie Daley, Geoff Toovey, Neil Henry, Todd Payten and Justin Holbrook are among the other alternatives.

Although the Tigers missed the finals – they finished in ninth spot – Cleary’s stocks have risen after overseeing a rebuild at a club many tipped to come last. The bond between the Cleary clan is undeniable, as evidenced by Ivan’s decision to donate a kidney to his brother Ash.

However, Cleary senior will come under heavy criticism if he doesn’t commit solely to the Tigers. He convinced a number of the club’s biggest-name recruits to join and play for him, some of them signing long-term deals or subsequently renewing their contracts.

There is also the question of why Cleary would want to go to a club that only recently sacked him. Gould said Cleary was “tired”, ushering in Griffin as his replacement. However, Gould then sacked Griffin with more than two years remaining on his contract, leaving Cameron Ciraldo to oversee the team in a caretaker role over the past six weeks.

It remains to be seen how, and for how long, Gould and Cleary can work together this time around if the later decides to return to his old post.