Patty Mills' hopes of rising to a second NBA championship are over after the San Antonio Spurs were knocked out of the title race by the Golden State Warriors on Wednesday.

Mills scored 18 points in his 36 minutes, including four three-pointers, but it wasn't enough as the Warriors sealed a 4-1 series win with a 99-91 triumph in Oakland. 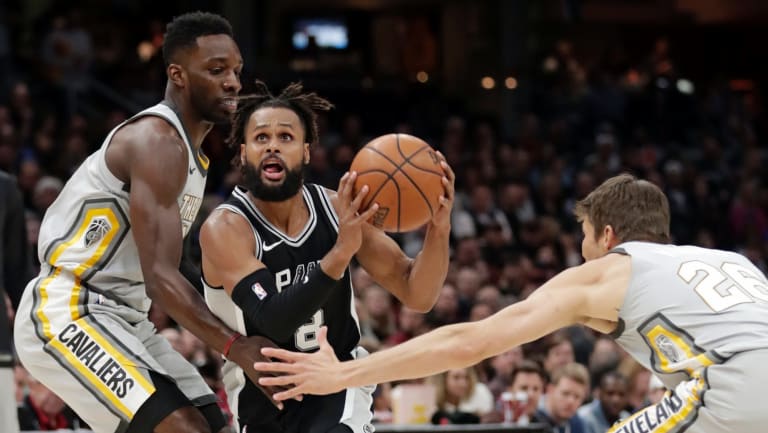 Patty Mills has been knocked out of NBA title contention.

The Spurs were playing without coach Gregg Popovich again after the death of his wife Erin last week, but came within two points of a late upset.

The Warriors' Kevin Durant cooly sealed the game with a jump shot at the top of the key and then hit two free throws.

Mills' hopes have been shattered, but No. 1 draft pick Ben Simmons has written another chapter of his fairytale rookie season, leading Philadelphia out of dark days to become legitimate championship contenders.

The 76ers eliminated Miami Heat from the playoffs on Wednesday with a 104-91 victory in front of a jubilant home crowd.

But instead of celebrating their first series victory since 2012, the 21-year- old from Melbourne was all business.

The 76ers emphatically won the first round series against the Heat 4-1 and will play the winner of the Boston-Milwaukee series in the second round.

Simmons had 14 points, nine rebounds and six assists against the Heat.

He was the victim of physical play including being undercut by Josh Richardson and struck by Goran Dragic but refused to be baited.

"The game is bigger than that play," he said.

Joel Embiid, the 76ers' 213cm tall centre from Cameroon, arrived in Philadelphia in 2014 but had his debut delayed for two years while recovering from foot and knee injuries.

Simmons was the 76ers' number one draft pick in 2016 but the freakish 208cm tall point guard missed his first season with a foot injury.

76ers' coach Brett Brown, covered in chocolate milk and water tossed around his locker room in celebration, reflected post game how he'd joined the 76ers in 2013 when they were so bad they had 63 losses and 19 wins.

It was all part of a strategy dubbed "The Process" where losing seasons led to high draft picks like Simmons and Embiid.

He will announce his decision when he returns to Miami. Earlier Tuesday in Boston, the Celtics took a 3-2 lead against Milwaulkee with a 92-87 win.

The Celtics can eliminate the Bucks from the playoffs in Thursday's game six and set up the second round battle with the 76ers.

Maker, after stunning games in the past two wins in Milwaukee, had just two points, no blocks and fouled out in the final seconds.

Dellavedova was scoreless and struggled with the Celtics pressuring him full court when he brought the ball up.

The Bucks' Giannis Antetokounmpo was not his dynamic best with 16 points and 10 rebounds.