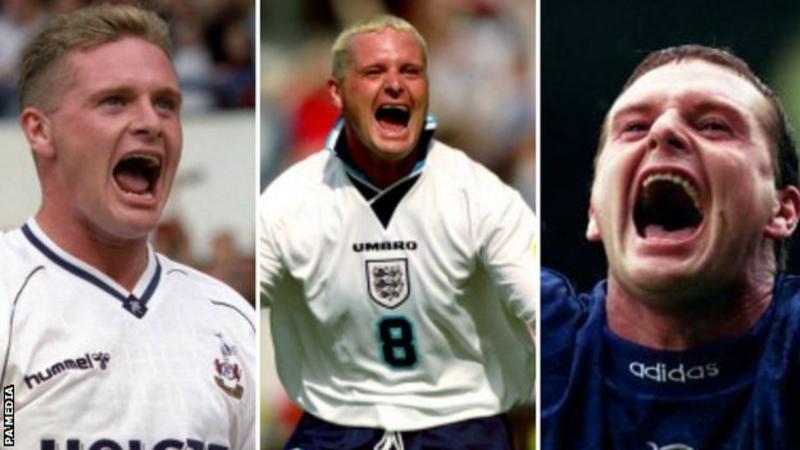 A wasted talent? Troubled genius? Greatest England player of his – and many other – generations? The reason you got into football? All of the above?

Few footballers of the past 30 years have captured the imagination quite like Paul Gascoigne.

From Mars-bar loving maverick at Newcastle to Roman playboy via World Cup brilliance, Gazza really had it all. And did most of it.

Could he have been managed better? Should he have done more with his career? Was he the best player England has produced since, well, you name a date?

All valid questions and just some that will be debated during Gazza Day on BBC Sport on Saturday, which coincides with the start of our Euros Rewind programming throughout June, kicking off with a full rerun of England’s game against Scotland at Euro 96.

Here are 10 of what could have been a huge list of his most iconic moments – both good and bad. You can rank them in order at the bottom of the page. 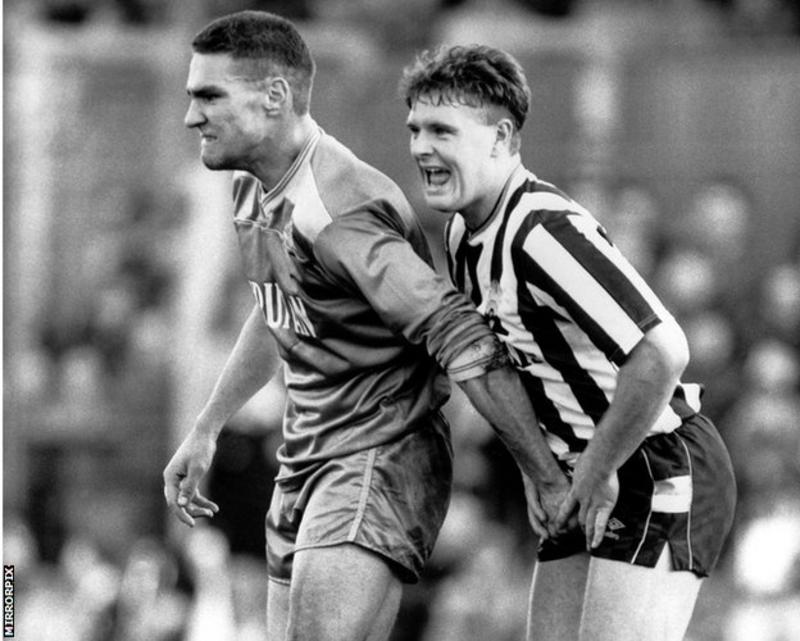 We’ll start with the earliest moment on our list – a truly iconic photo that first helped make a young Gascoigne a household name. Hard man Vinnie Jones of Wimbledon had been told to man-mark Gascoigne everywhere he went, such was the then 20-year-old’s influence on the Newcastle side. Jones went the extra mile and the picture became hugely famous.

Booking a seat on the plane 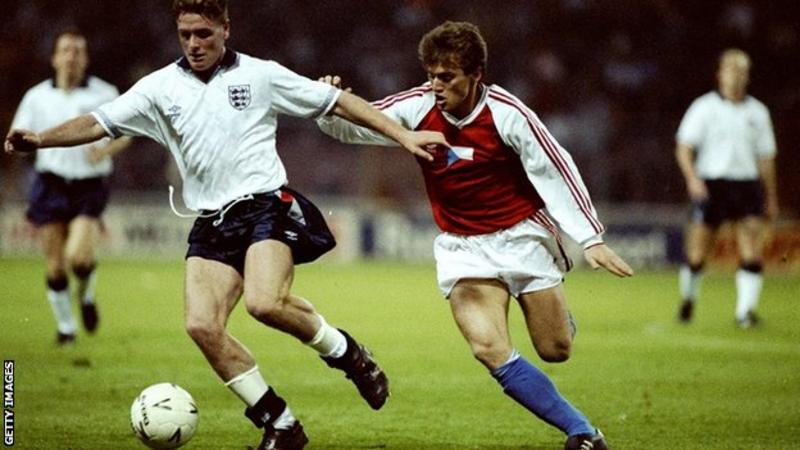 If you want an illustration of just how much football changed in the early 1990s – partially fuelled by Gascoigne – there were just 21,000 fans inside Wembley for this friendly as Bobby Robson finalised his World Cup squad. Gazza was given just his second start for the Three Lions and secured a spot on the plane with a dominant performance, capped with a fine late goal, surging into the area, left foot this time, laced into the roof of the net.

England had been steady if not superb at the 1990 World Cup but made their way through to the last four with Gazza providing key assists against Belgium and Cameroon. His powerful displays in midfield were key for Bobby Robson’s side but it was a moment of dismay which really made him the nation’s favourite.

Already booked earlier in the tournament, Gascoigne lunged in on Thomas Berthold in the semi-final and was shown a yellow card which would rule him out of the final, should England progress. Tears flowed, Gary Lineker told the bench to have a word, England fans as one were gutted.

‘Oohhhhh I say! Brilliant! That is schoolboys’ own stuff!’

Brilliant hit, brilliant goal, brilliant commentary from Barry Davies. Gazza scored his sixth goal of Spurs’ FA Cup run in the semi-final at Wembley, an unstoppable drive past David Seaman from an improbable distance. This was Gascoigne at the peak of his powers, with a huge transfer to Lazio already on the cards. Just sublime.

His post-match interview was equally memorable… 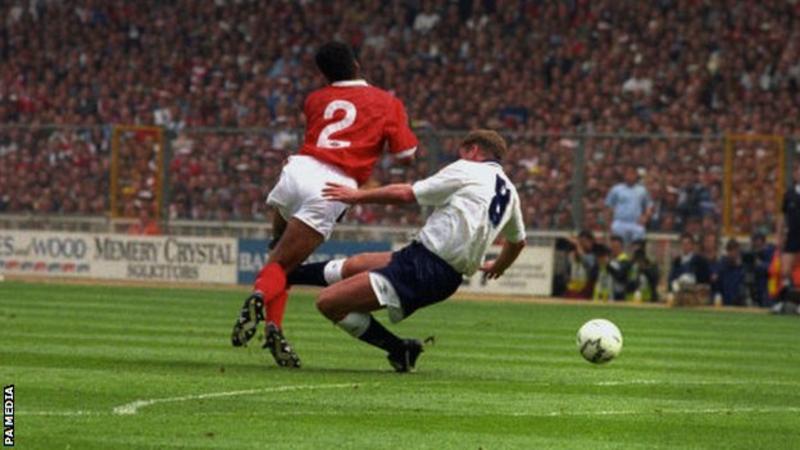 If you thought Gazza was pumped for the semi-final, he was absolutely wired for the biggest domestic game of his career in England – and his last before heading out to Serie A.

He couldn’t sleep the night before the FA Cup final and had an injection from the club doctor, which didn’t seem to have much effect. After antics with the Royals in the pre-match presentation, he could have been sent off for a wild challenge on Garry Parker after just a few minutes, catching the Forest player in the chest.

Worse was to come when Gascoigne scythed down Gary Charles – again, it could have been a red card – with Stuart Pearce smashing in the free-kick.

Gazza had to leave the field on a stretcher, missing the chance to be on the pitch as Spurs sealed what remains their last FA Cup win.

He’d badly injured his knee, missed a whole season and eventually joined Lazio for a fee of £5.5m in the summer of 1992. 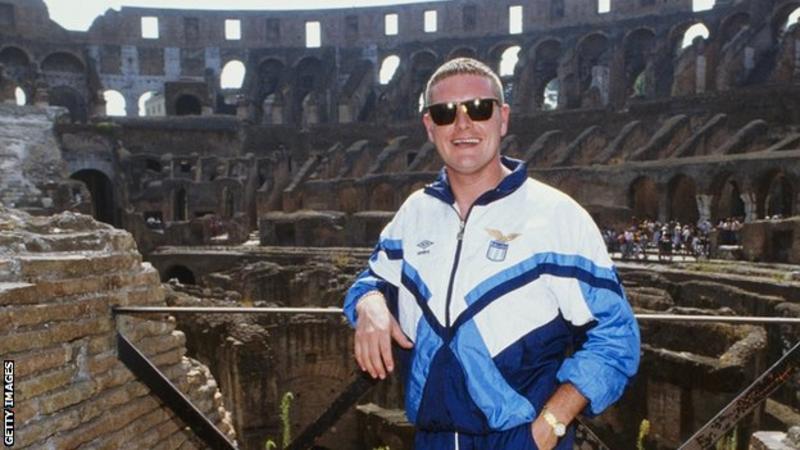 Another huge game. Gazza called his first Rome derby “life or death” and he fittingly marked it with a thumping header, his first goal for his new club, three minutes from time to save a point.

Mobbed by his team-mates, the goal caused havoc in the stands and endeared him to the club’s fans. Overall though Gazza’s time in Italy was beset by injury problems – he would score just five more Serie A goals. 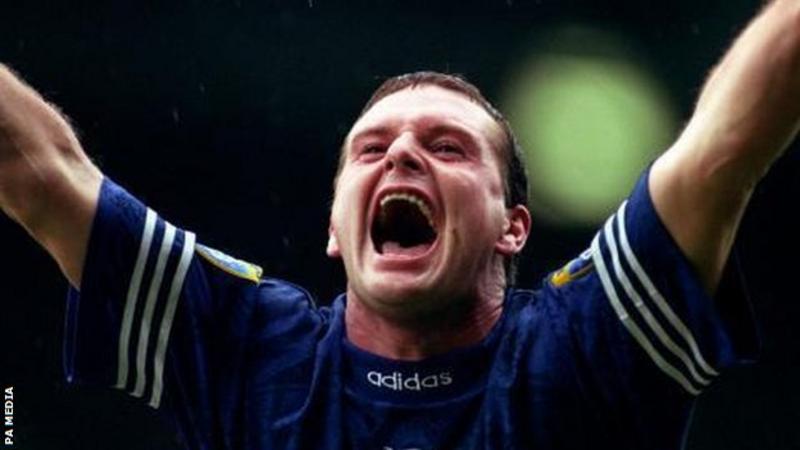 After three years in Rome, Gazza was ready to come home – well, almost. A move to Chelsea didn’t work out, Everton had their doubts over his fitness but a big-money switch to Rangers eventually paid off.

Gascoigne was still only 28, but many doubted his mental and physical well-being and some saw the move as a backwards step. Instead, Gascoigne played some of the best football of his career.

Some of his goals and assists for Rangers are ridiculous, really. Gazza at his absolute best, surging past midfielders, dummying defenders, lashing past keepers with either foot. A dream to watch.

But perhaps his most memorable moment came against Hibs. After a 50-yard run ended with a shot wide, Gascoigne retrieved a yellow card dropped by referee Douglas Smith and returned it in style – brandishing it at the bemused ref.

Smith did not see the funny side of it, booking Gazza for dissent. In the second half Gascoigne made sure his name was in the book again by beating four Hibs defenders and firing in. Sensational.

Gazza only appeared at two tournaments for England but they reached the semi-finals on both occasions. His place in the team was under question by the time Euro 96 rolled around, so Gascoigne made his point against Scotland with one of the Three Lions’ finest ever goals.

It is a strike that sums up Gascoigne the player – the surging run from midfield, the vision and awareness to attempt the lob, the execution to volley home and then the sense of fun and theatre to produce the celebration – referencing an alcohol-related “dentist-chair” stunt in a Hong Kong bar pre-tournament. 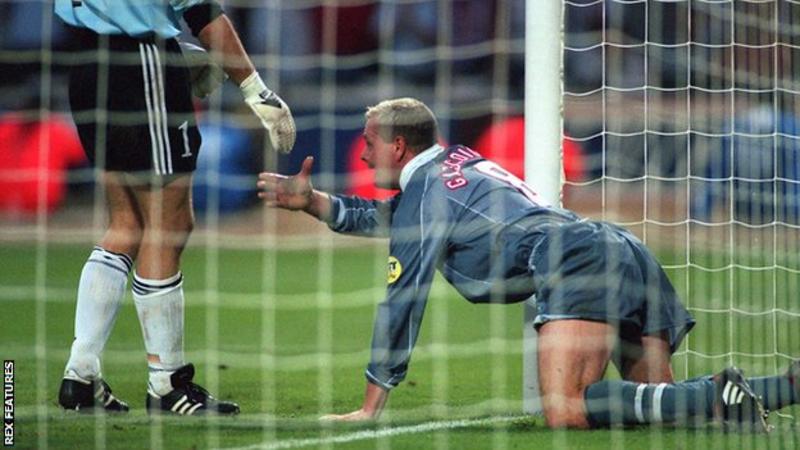 Just as six years earlier, England were denied a place in a major final on penalties by the Germans. Gascoigne was again excellent, scoring in the shootout decisively, but came so close to winning the game in extra time. Golden goal extra time.

Teddy Sheringham’s beautiful lofted pass found Alan Shearer at the far post, he hit a volley across the goalmouth, and goalkeeper Andreas Kopke stretched out a glove. Gascoigne, anticipating a touch, waited a split second before sliding in and missed an all-but-certain winner by inches. 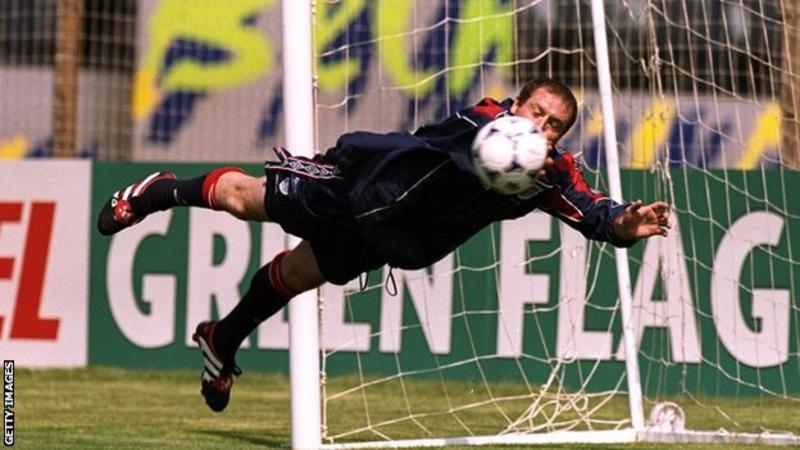 Glenn Hoddle was the new England manager after Euro 96 and initially at least Gascoigne remained involved. He helped England to qualify for the World Cup in 1998 but despite being warned by Hoddle to stay fit and focused, Gazza was instead pictured drinking and eating kebabs with Chris Evans.

It wasn’t a great look. Still, the footballing world was shocked when Gazza was left out of Hoddle’s final 22-man squad. Gazza didn’t take it well, trashing a hotel room, as Hoddle would later recall in a book.

“He had snapped. He was ranting, swearing and slurring his words. He was acting like a man possessed. Physically he wasn’t 100%, mentally he was all over the place.”

Gascoigne would never play for England again. Perhaps he did have a point though when he said: “I don’t see how one kebab can be the difference between beating one or three men or running from box to box or scoring a goal.”