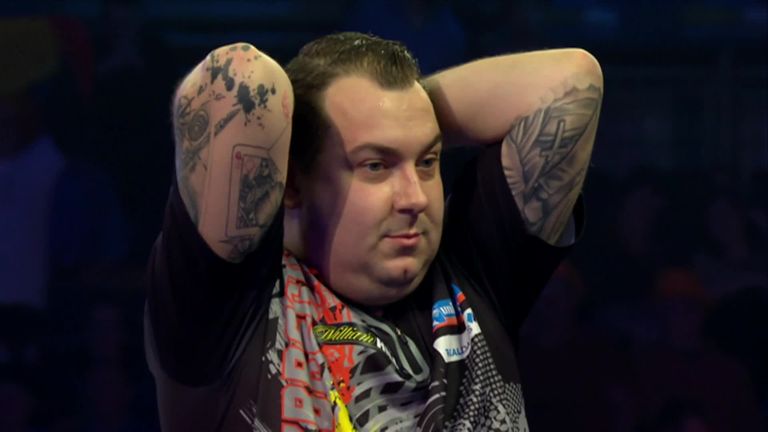 Second seed and 2018 world champion Rob Cross joined Raymond van Barneveld in crashing out of the World Darts Championship on a night of shocks at Ally Pally.

On an incredible night of drama at Alexandra Palace, second seed Cross claimed just two legs as he was thrashed by an ecstatic Huybrechts.

‘The Hurricane’ had lost his previous six meetings against the 2018 world champion and ‘Voltage’ drew first blood on double 18.

However, a clinical 116 combination from Huybrechts saw the Belgian open his account and this sparked an astonishing sequence of eight consecutive legs – which culminated in a spectacular 152 checkout.

Cross was floundering – the world No 2 incredibly bust a 130 checkout in the early stages of set three and he was averaging below 85 for large periods of the contest.

He eventually stopped the rot via double 10 with Huybrechts one leg away from victory, but the Belgian wasn’t to be denied – sealing his progression with a majestic 11-darter.

Mark McGeeney was one of three debutants to rack up a victory on their first appearance at Alexandra Palace, but the news wasn’t as good for Jamie Hughes, another recent crossover from the BDO.

The reigning world youth champion won a sudden-death decider against 18th seed Jermaine Wattimena to reach the third round. Humphries hit nine 180s, averaged almost 98 and twice came from a set down before winning 3-2 in a gripping encounter that had the Ally Pally crowd enthralled.

What a game of darts, Humphries v Wattimena, both young men a credit to our sport.

Debutant Luke Woodhouse put an early end to the hopes of 65-year-old Paul Lim, whose 24th World Championship appearance ended with a 3-0 defeat.

‘Woody’ is at the other end of the scale, making his debut in the event he averaged 96 to advance to a meeting with last year’s runner-up Michael Smith on Sunday night.

Darius Labanauskas, who knocked out Barney last year, kicked off Saturday’s play by beating Matthew Edgar for the second year in succession and Japan’s Yuki Yamada won the battle of debutants, coming from a set down to beat Ryan Meikle 3-1.

What’s in store on Sunday

It’s the first of two ladies’ nights in the first round on Sunday – a day that features nine different nationalities. But all eyes will be on Japan’s reigning BDO women’s champion Mikuru Suzuki takes centre stage, she faces James Richardson in the evening session.

Suzuki secured her debut by winning through at the Rest of the World qualifier to book her place in the 96-player field.

Also in action is last year’s runner-up, Michael Smith, who plays in the final match of the night to ended a bumper weekend of 16 matches across four sessions in two days.

The fourth seed takes on Woodhouse, while Andy Boulton takes on Danny Baggish with Arron Monk and Jose Justica completing the evening’s line-up.

In the afternoon Brendan Dolan and Nitin Kumar meet for the right to play two-time champion Gary Anderson on Monday night.