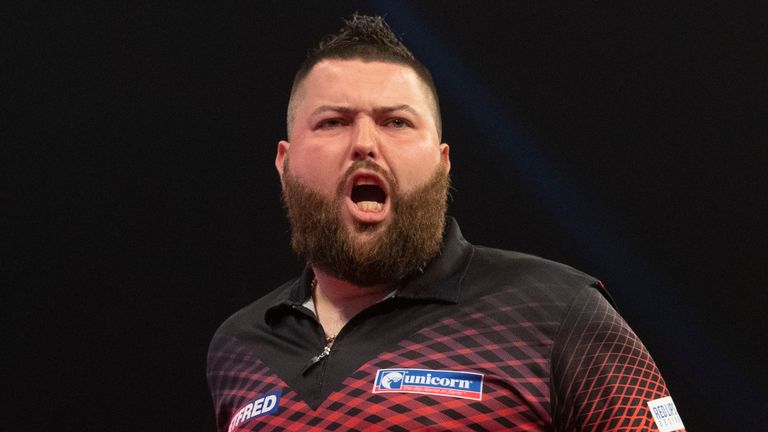 Having ended a run of 10 consecutive final defeats on Tuesday, Michael Smith made it back-to-back titles as he came from 4-1 down to beat Jose De Sousa 8-7 on Day Two of the Winter Series.

A thrilling day of darts saw Smith double up on his first ProTour title in two years on Day One, while Andy Hamilton and Rowby-John Rodriguez both threw nine-darters.

De Sousa built himself a 4-1 advantage in the final with legs of 11,13 and 11 before Bully Boy drew level and eventually edged it by taking out double 10 in a decider after the pair had found themselves level at 7-7.

“I’m going to echo what I said yesterday, it’s the confidence and belief in myself and finally winning that title yesterday the pressure was off,” Smith told the PDC after the final. “I didn’t do too much wrong today, I was checking finishes where I needed to.

“He (De Sousa) is a classy classy player and he showed that in the match. I was 4-1 down and I turned round and looked at a picture of my kids and thought ‘you know what, I played him yesterday and was 3-1 down and I managed to reel off consecutive legs and go 5-3 up or 6-3 up’ so I just thought, ‘he’s going to give you a chance, just make sure you take it’.

“I’m just overjoyed and over the moon at the minute.”

?Hear from your champion…

Dan Dawson speaks to Michael Smith after he wraps up a second title in two days, winning on Day Two of the PDC Winter Series! pic.twitter.com/mG9dikD2E4

Smith began the day with a 6-3 win over Derk Telnekes before averaging 106.1 to see off Matthew Dennant 6-1 followed by 106.8 against Damon Heta.

The 30-year-old overcame Dirk van Duijvenbode in the last 16 and then Gabriel Clemens, who had averaged an incredible 109 throughout the day after posting a 112 average on two occasions, before making light work of Vincent Van der Voort with a 7-3 victory.

De Sousa’s route to the final saw him beat Jason Lowe, Adam Hunt, Bradle109y Brooks and Danny Noppert in the early rounds, before ousting Jeffrey de Zwaan 6-5 and averaging 110 in a 7-2 win over Joe Cullen to set up a clash with Smith.

It was meanwhile a day to remember for Hamilton as he ended a seven-year wait for a perfect leg in PDC darts, the 53-year-old registering his nine-darter against Christian Bunse. One became two in the space of 10 minutes as Austria’s Rodriguez followed suit against Boris Krcmar.

The final five days of Pro Tour action continue on Wednesday with Grand Slam places still up for grabs as well as the last chance for many to secure their Tour card for next season. You can follow the Grand Slam action on Sky Sports with all nine days from Coventry getting underway on Monday, November 16.