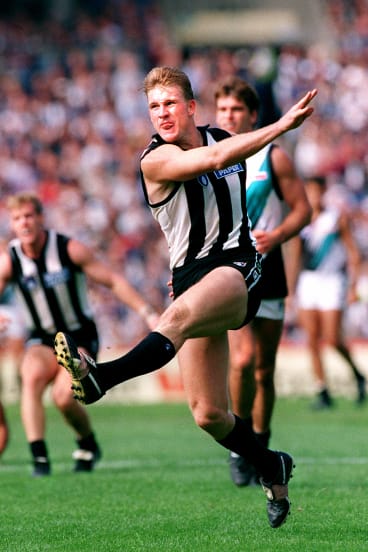 As Collingwood champions, they sit comfortably side by side.

But on Friday night, Scott Pendlebury will get one up on Nathan Buckley when he plays his 261st game for the club, overtaking his coach’s 260 in black and white.

Has Pendlebury also surpassed Buckley as the greatest Magpie of the modern era? It’s an intriguing argument because, statistically, they’re very even.

Pendlebury has won five Copeland trophies, is a five-time All-Australian, and you’d think he’s a decent chance to add to that tally before he retires. There’s no doubt he’ll one day be an AFL Hall of Famer. 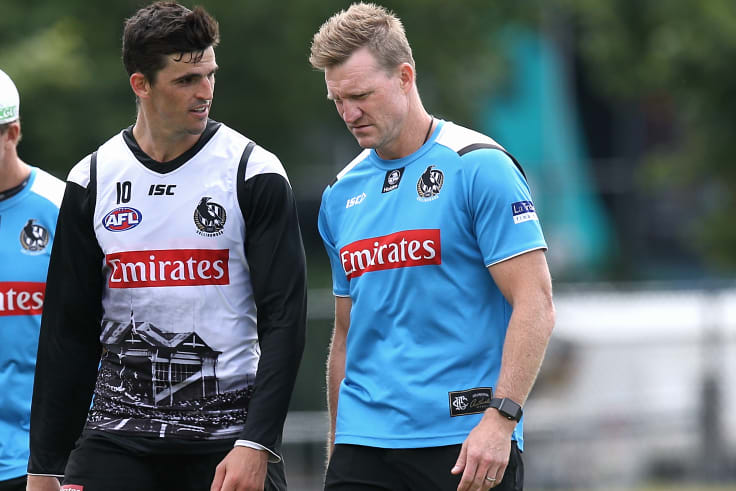 Captain and coach, so close.

If you look a little deeper at their Brownlow numbers, they’re remarkably similar.

When you look at their playing styles, differences emerge. Pendlebury is unique in the way he appears to move in slow motion when bodies are flying everywhere around him.

He makes difficult situations look easy with his vision and ability to weave in and out of traffic. Dustin Martin goes searching for contact, Pendlebury floats around it.

Others have more pace, but he creates more time, with a simple step left, or right. I’m sure he’s left many frustrated opposition supporters wondering how he does it.

In this area, he gets the nod over Buckley. In it, he’s almost unrivalled in the modern game. About the only player to have anywhere near that sort of time is Bulldog Marcus Bontempelli.

In raw numbers, Pendlebury has racked up 30 or more possessions 94 times to Buckley’s 67, remembering Bucks was tagged more often.

As for the quality of those disposals, Pendlebury has incredible touch by hand and rarely gives it to a teammate who isn’t in a better position.

By foot, he’s elite in short to mid-length kicking, and unlike many left-footers can use his non-preferred to decent effect if required.

He can hit a target that mightn’t always be the most obvious but is generally the best. That, along with his poise in the contest, is probably his greatest strength.

Pendlebury is certainly not a poor long distance kick, but in this facet, Buckley has his measure. Bucks had incredible penetration and was also very good in front of goal.

He averaged more than a goal a game in his time at Collingwood, and even in his debut season at Brisbane. Pendlebury  averages about 0.6 goals per game.

That potency meant that Buckley had real versatility. Pendlebury is used almost exclusively as a midfielder, but his coach could play anywhere.

In today’s game, Bucks could easily fill a Patrick Dangerfield-type role inside 50. In fact, I think he would be even more dominant now than in the era he played.

He was great in the air, but in this area, Pendlebury is probably a little underrated.Because he reads the ball so well, he takes simple marks where others misread the flight of the ball.

Leadership is much harder to judge.

From afar, it seems they have many similarities in how meticulous and professional they are in their preparation. They both set great examples for their teammates.

Pendlebury has been incredibly durable. There have rarely been queries over his form because of injury. He does everything in his power to get himself up for games.

You get the sense that plays a big part in the love Buckley has for his captain.

As a player, Bucks was more outwardly vocal.

Because he almost joined us at North Melbourne before going to Collingwood, Denis Pagan always used to fire us up when we met the Magpies.

But Buckley gave as good as he got, and was certainly never a shrinking violet. As he matured he clearly became a better captain, particularly when he led Collingwood to those grand finals in 2002 and 2003.

Reaching those finals and nearly beating the all-conquering Lions should stand as Mick Malthouse’s greatest achievement as coach, given the list he had at his disposal. He couldn’t have done it without Buckley.

Often in these types of discussions, premierships weigh heavily.

But Bucks shouldn’t be judged more harshly because Pendlebury has a tick in that column and he doesn’t. Both have been consistent big-game performers, proven by their Norm Smith Medals.

Add all of that up, Buckley still gets the nod over Pendlebury, because of his versatility and ability to hit the scoreboard.

But who knows: if Pendlebury can deliver his coach a premiership in the next few years, Bucks might be quietly satisfied to hand over the mantle.