When Cooper Cronk and James Tedesco were added to an already star-studded side, it was widely predicted the Roosters would immediately add another premiership to their tally.

Having finished the regular season on top, there is every chance that it will play out that way. The tricolours are the bookies’ pick for the title, a chance for coach Trent Robinson to turn his fourth minor premiership in six years into a major one. 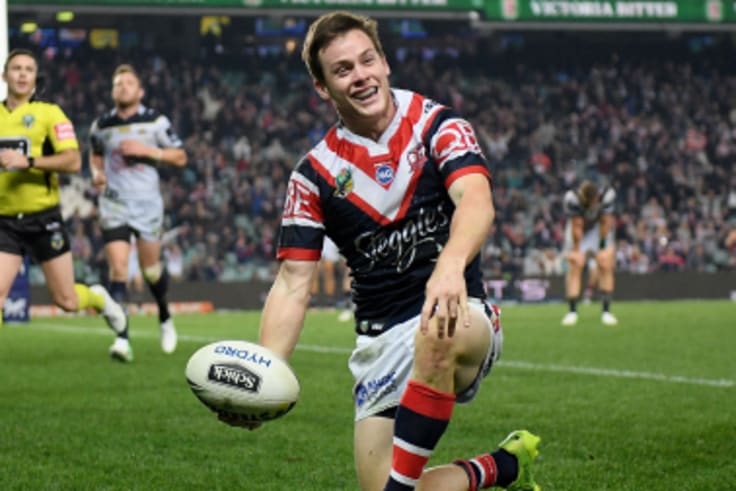 Reward for effort: The hard work is paying off for Luke Keary and the Roosters.

Regardless of where they ultimately finish, the effort it has taken to get there has been grossly understated. When Robinson revealed, after winning the minor premiership, that there was “pain” involved for all and sundry, it was a pointer towards the work done to ensure the additions of Cronk and Tedesco to the team weren’t for nought.

“It’s been the hardest I’ve had to work as a player,” said five-eighth Luke Keary.

“People don’t really get to see that, but we know what we’ve had to do.
“It hasn’t been rosy for us. We’ve struggled at the start of the year, we copped our fair share of criticism. It hasn’t been a cruisy run for us. We know how hard it’s been.

“It requires hard work, that’s what it comes down to.”

No one has benefited more from Cronk’s arrival than Keary. Cronk is a September specialist, having played finals in 14 of his 15 seasons in the top grade.

The long-time Queensland and Australian halfback also has the unique distinction of being in the minor premiership-winning team for three seasons in a row, proof that leaving the Storm doesn’t necessarily equate to kissing success goodbye.

“He’s been awesome for us,” Keary said.

“He’s taught me a lot about what you call ‘the long game’ in footy. How to set things up, set victories up.

“I’ve learned a lot about that kind of stuff. It’s good to have someone there that has been there and done it, knows what it takes.

“Obviously he’s playing some really good footy over the last two or three months. Just the way he controls games.

“People don’t see the stuff he does during the week, the input and the influence he has on players and the team.

“He knows exactly what you need to do at that time of year to get the job done.”

The remaining eight contenders are hoping they have timed their run to perfection. Keary, speaking with the experience of a playmaker who has won a grand final with South Sydney in 2014, concedes it’s not possible to be up all the time.

The Roosters had their flat patches early when adjusting to the two new additions into their spine  but appear to have clicked at the important part of the season.

“You have to go up and down in points of the year,” Keary said.

“It will be through injury, form and other stuff, but you have to be hitting your straps at the right time. That time is this week.

“You also need a lot of things   to fall into place. Obviously injuries, staying fit, playing good footy. Who you play against, where you’re playing,   who is reffing your game," he adds with a laugh.

“You’ve got to be on, you can’t carry one person into September.

“You need to have 17 people humming at the same time. You can’t carry one or two people.”

The Roosters face one of the NRL’s form teams, Cronulla, in the opening week of the finals. They have played just once this year season, a 28-10 victory to the Chooks in round five. It’s a result neither team will read too much into given how much time has elapsed.

“We’re a lot different to then and they would be fairly different in how they go about things too,” Keary said.

“They have been good, they have had some good wins. They have some old heads there from when they did it in '16.

“I think they have had the wood over us the last few years, so it should be an interesting game.”