The 38-year-old remains in the frame to play in a fourth consecutive World Cup despite playing only 63 minutes of club football in five months and being without a competitive club goal in more than a year. 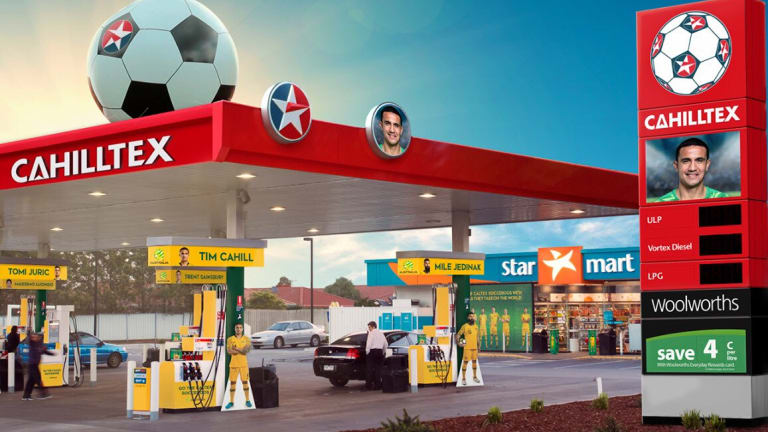 National icon: Caltex have transformed a service station into ‘Cahilltex’ in honour of the Australian star.

His inclusion was somewhat controversial given it coincided with the omission of in-form Scotland-based striker Jamie Maclaren and was followed by a large-scale advertising campaign involving Cahill and Socceroos sponsor Caltex.

The petrol brand immediately unveiled a promotional campaign dubbed "Cahilltex" following confirmation of Cahill's selection in the 26-man squad that will travel to Turkey for the Socceroos' pre-tournament training camp.

Speaking to media on Tuesday morning, Gallop says Cahill's proven history with the national team was the only reason the veteran was included in the trimmed squad.

Cahill has struggled for game time this season, making 10 cameo appearances off the bench for Millwall in the English Championship.

The final 23-man squad will be finalised on June 4, though Socceroos coach Bert van Marwijk has spoken of his admiration for Cahill, who he deems "a special case" when it comes to his inclusion.

"[Cahill] is also a player who can make a difference," van Marwijk said last week. "He will not be nervous if we play in front of 80,000 people."