It took 22 holes for Phil Mickelson to defeat Tiger Woods in their $9 million, winner-take-all golf duel on Friday in North Las Vegas, Nev. The four extra holes forced the pair to finish after nightfall and under the lights at Shadow Creek Golf Course, but the most dramatic development of this exhibition match might have been the faltering of its pay-per-view coverage.

The match, believed to be golf’s first pay-per-view venture, was supposed to cost $19.99 to watch, but a lot of people got to see it free because of a glitch at one of the outlets. (The gallery at Shadow Creek was limited to invited guests.)

B/R Live — the sports streaming platform for Turner Sports, which produced the duel between Woods and Mickelson — had technical difficulties at the point of purchase, a Turner spokesman said. There were numerous online complaints from customers who had paid to see the match but could not gain access to the stream, and so B/R Live removed the payment requirement and provided the match on an open platform, at no charge. 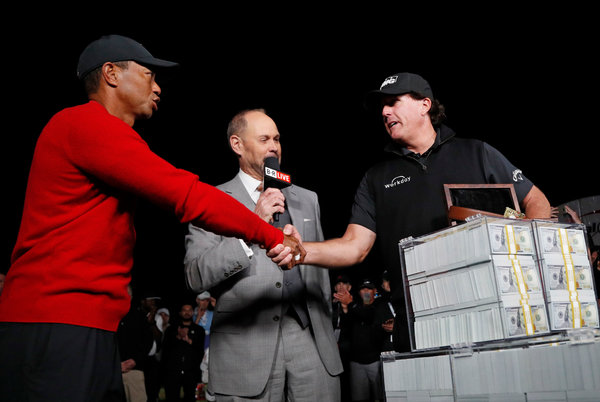 “We experienced some technical issues on B/R Live that temporarily impacted user access to The Match,” Nate Smeltz, the Turner spokesman, said in a statement. “We’ve taken a number of steps to resolve the matter with our main priority being the delivery of content to those that have purchased the pay-per-view event.”

Turner, he said, did not know how many people the technical issues had affected.

The match was also available for a fee through cable operators and DirecTV, but only people who purchased through B/R Live were affected by the glitch, according to the statement. Those other providers, however, may have lost potential customers when the match was available free on B/R Live.

Many pay-per-view events, like the Conor McGregor-Floyd Mayweather fight last year, have been plagued by problems, because most customers delay their purchase until shortly before the event, overwhelming systems. And while cable and satellite operators have had decades to figure out how to handle the demand, new online streaming platforms have not.

For the win, Mickelson made a four-foot birdie putt on a specially set up 93-yard, par 3. Mickelson was 1-up after 16 holes, but Woods tied it with a birdie from the fringe of the green on the par-3 17th hole.

Both birdied the par-5 18th and then parred the first playoff hole before it went to the par-3 extra hole that they kept playing until there was a winner.