The Phoenix Suns were awarded the No. 1 pick in next month's NBA draft via the lottery held Tuesday in Chicago.

The Suns, an NBA-worst 21-61 this season, had the highest odds at the No. 1 pick at 25 percent entering the drawing. The Sacramento Kings, with an 18.3 percent chance to select in the top three, will pick second, and the Atlanta Hawks (42.6 percent at top three) will make the No. 3 pick. 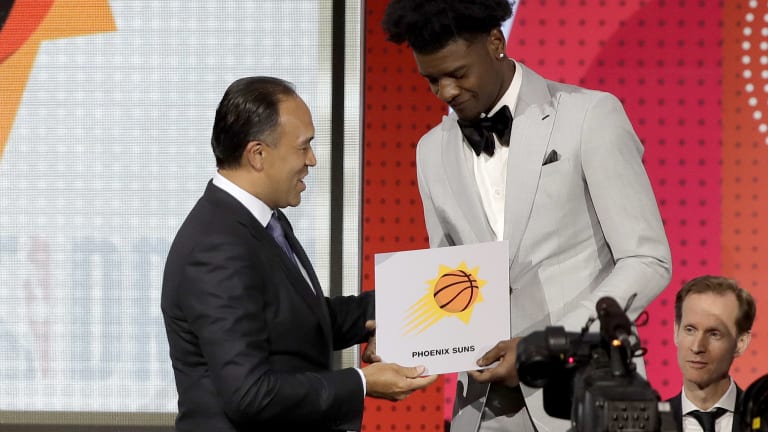 The Memphis Grizzlies (55.8 percent at top three) and Dallas Mavericks (42.6 percent) were bounced from the top three with the drawing. They will pick fourth and fifth, respectively.

"This is a historic night for the Phoenix Suns," general manager Ryan McDonough said in a statement. "Those of us in the room in Chicago felt the tension, then it was an unbelievable feeling to see it revealed that we received the No. 1 selection. In the illustrious history of the franchise, we've never had the first overall pick and to bring it home in such a loaded draft at an important point in time for our franchise, it's incredible."

The draft will be held June 21 at Barclays Center in New York.

"Extremely excited – I think it's something that we really needed," Suns representative Josh Jackson, the No. 4 pick in last year's draft, told ESPN. "Now we just gotta sit and see who we want."

The Suns have seen plenty of Ayton during his time at nearby Tucson, while Doncic played for new Suns coach Igor Kokoskov on the Slovenian national team last summer.

"I can't compare those two guys because I lived with Luka. I coached Luka," Kokoskov has said, via azcentral.com. "I've watched highlights of the other kid. I don't ever run away from my opinion, but other guys have seen him play a lot more than me."

The Orlando Magic will pick sixth, followed by the Chicago Bulls seventh and Cleveland Cavaliers eighth. The Cavs' pick originally belonged to the Brooklyn Nets – the key piece to last summer's Kyrie Irving trade with the Boston Celtics.

The New York Knicks will pick ninth, and the Philadelphia 76ers will choose 10th – a pick originally held by the Los Angeles Lakers that could have gone to the Celtics if it landed at No.2 or No.3. The Charlotte Hornets hold the No. 11 pick, and the Los Angeles Clippers will pick back-to-back at Nos.12 and 13 with the Detroit Pistons' pick (No.12) falling outside the top four. The Denver Nuggets round out the lottery at No. 14.

The rest of the draft order has already been determined by worst to best record among play-off teams, with the Washington Wizards holding the No. 15 pick.