Collingwood are highly unlikely to recall Darcy Moore for Friday night's preliminary final against Richmond at the MCG.

There has been speculation in recent days that the Pies could bring the young key defender back for what would be just his eighth senior game this season and first since his latest hamstring injury in the round 20 loss to Sydney. 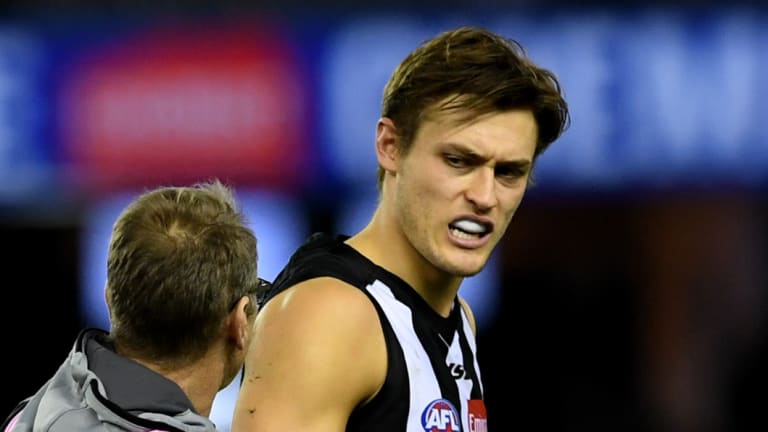 Darcy Moore has struggled with injuries this season.

However it’s understood the Pies are of the view that Moore, 22, hasn’t done enough work to be called on for such an important game.

The out-of-contract big man has been hit hard by injuries this year, with recurrent hamstring issues.

It had been suggested the Pies have been unable to pinpoint the exact cause of Moore’s troubles, but his manager Liam Pickering denied that on Tuesday morning.

“If there’s nothing wrong with him he’d be playing. But he’s obviously still been feeling it so he’s affected,” Pickering said on SEN radio.

“I know he was 80 per cent last week … trained, obviously they didn’t feel he was ready to roll.

Pickering did however say that Moore was close to re-signing with the Pies.

Chris Mayne and James Aish have been identified by pundits as players most vulnerable to losing their spots this week if Moore were to return, although it’s understood the Pies are set to back in their undersized defence featuring Tyson Goldsack, Jeremy Howe and Tom Langdon.

The Pies have endured an unusually high incidence of injuries to key defenders this year, with Moore, Lynden Dunn, Matt Scharenberg, Ben Reid and Goldsack all missing long stretches. Late in the year the Pies even called on former basketballer Jack Madgen to plug a hole, but he was dropped on the eve of the finals.

Collingwood captain Scott Pendlebury said on Monday that he would back Moore to get the job done if picked.

“I think I said it last week with 'Darce,'” Pendlebury said.

“If he puts his hand up and declares himself fit to go, then good luck to our coaches with that selection headache. But that’s finals football, there’s tough calls to be made, and it would be great to have a guy like Darcy – if he’s right to go – come back in.”