Collingwood's offer for talented young key-position star Darcy Moore is only for two years, with talks expected to resume between Collingwood and his management once Moore has recovered from his latest hamstring setback and is back playing.

While there has been a pattern of talented younger players being secured on long-term deals, the Magpies have offered their most capable young key-position player a two-year deal, an offer that has been on the table since January. 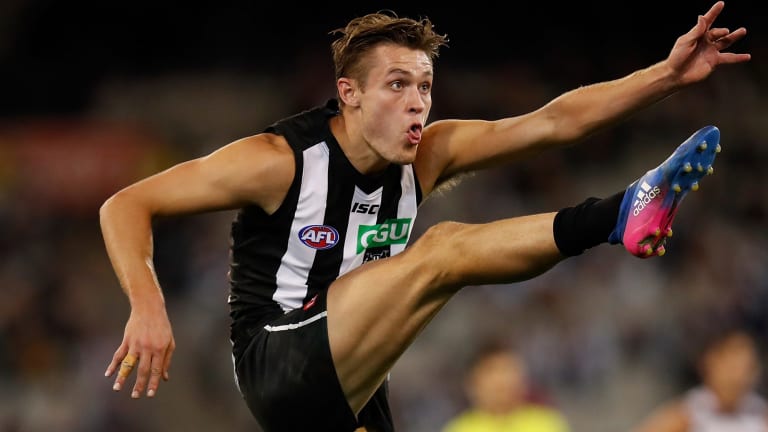 Collingwood is expected to resume contract talks with Darcy Moore once he’s back from his latest hamstring niggle.

Several clubs have enquired about Moore, including Sydney, but the Swans are considered a longshot to secure the key-position prospect, who will probably be missing until after the bye given that he has had two hamstring injuries already this year and the Pies have been extremely careful in managing him.

Collingwood is understood to be the only club to have made Moore a formal offer. The two-year offer is viewed as not disrespectful, even though Moore has not opted to sign yet. The short-term offer arguably reflects the reality that while Moore has not played much lately, his potential upside is enormous and a longer-term might not benefit him if he develops as the club hopes.

Moore suffered a hamstring strain during Collingwood's loss to Geelong last Sunday, and while the strain – to a different part of the hamstring to the previous injury – is not major, Collingwood is expected to be super-cautious with both Moore and forward Jamie Elliott, who also pinged a hamstring for the second time when resuming in the VFL on Sunday.

Moore has played only four games in 2018, and suffered hamstrings early in two of those matches, against Greater Western Sydney (round two) and Geelong (round eight). He missed a block of four games following the first strain.

Collingwood has four more games until it has a bye, which follows the Queen's Birthday game between Melbourne and the Magpies.

Nathan Buckley had planned for Moore to be played primarily in defence this year, but injuries and team balance has seen him mainly stationed forward in three of the four games he has played.