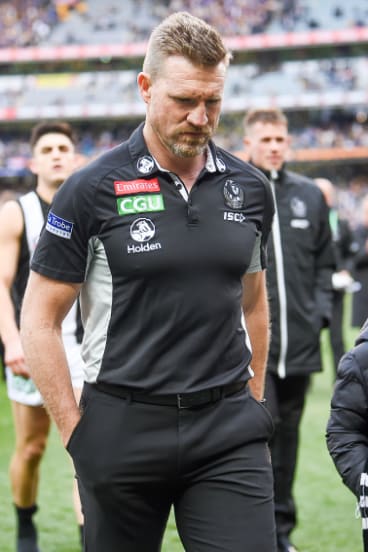 Collingwood coach Nathan Buckley said he was ‘‘numb’’ with disappointment after a gut-wrenching five-point loss to the West Coast Eagles in the AFL grand final, admitting the Magpies would be haunted by ‘‘little moments’’ late in the match.

The Magpies booted the opening five goals but the Eagles responded with 11 of the next 17, including the match winner when Dom Sheed marked and converted from about 40metres just inside the boundary line with a minute, 45 seconds left.

Chris Mayne was one of several Magpies in tears in the dressing room, as the emotion of losing a classic decider bubbled over.

While the Magpies had rebounded from 13th last year into a grand final, this was another sour end for Buckley, who lost the deciding matches of 2002 and ’03 when captain. He was an assistant coach in 2010 when the Pies triumphed under Mick Malthouse but he has still to taste the ultimate success in the driver’s seat.

‘‘I didn’t picture this. We had a really clear picture of the way we play and, all of us, in our own time, would have pictured the best outcome. For a long part of today we were there, but ultimately not,’’ Buckley said.

‘‘We allowed them [Eagles] to play their game style for too long and, ultimately, that hurt us. We stopped shifting the ball, we lost our dare, and we lost our aggression to shift the ball. We looked pretty good early. When that stopped, and we started kicking long down the line, and Coxy [Mason Cox] was fantastic, he was taking marks at half-back and his opponents were dropping back, but we had to shift the ball from there, and we weren’t able to do it enough.’’

Midfielder Taylor Adams was superb with 31 disposals, including nine clearances, Adam Treloar found plenty of the ball but Steele Sidebottom, the Pies best player through September, was quelled by tagger Mark Hutchings and held to only 14 disposals.

Tom Langdon was strong in defence although Jack Darling was best afield in the third term when the Eagles lifted.

Ruckman Brodie Grundy had 49hit-outs but Scott Lycett and Nathan Vardy had an influence up forward and around the ground. Grundy had only 10 touches. Cox lifted after half-time with two goals and several key marks but skipper Scott Pendlebury was relatively quiet with 20 disposals.

While the Magpies had 33 more tackles, Buckley said they had spoken at half-time about the need to avoid bombing the ball inside 50, as it allowed the Eagles to enjoy aerial dominance.

‘‘It really did fall in their favour – it brought [Jeremy] McGovern, [Tom] Barrass and [Shannon] Hurn into the game,’’ he said.

Buckley was a shattered man in the coaches’ box when the siren bellowed, his head bowed and in his hands, the emotion of a shattering afternoon there for all to see after his team squandered a two-goal break early in the final term.

He said his emotions as a coach were ‘‘totally different’’ to those as a player although he could not remember how it felt after losing grand finals to the Brisbane Lions as a player.

‘‘I can’t even be really clear on how it feels right now – other than not great. I am pretty numb, the boys are pretty numb, we are on the wrong side of it,’’ he said.

Buckley said the Magpies had been unable to capitalise on their early lead in the final term after goals from Brody Mihocek and Jordan De Goey.

‘‘We had two or three opportunities to get the ball out of the next centre bounce but we just weren’t clean and it went back the other way and West Coast got a goal pretty quick,’’ he said.

‘‘Those little moments will haunt the players, will haunt us. You need to be cleaner with that. If you are cleaner inside, that gives you the capacity to be able to shift the ball and be a bit more daring with it.’’

Eddie McGuire took a philosophical approach to his fourth losing grand final as president. ‘‘I just think the Eagles were fantastic this year. They beat us on three occasions. We walk away with a funny feeling – we are so proud of everything we have done this year,’’ he said.

‘‘We had it [premiership] just about there. The siren goes, whoever is in front is the champion team, and the West Coast Eagles are worthy champions for 2018.