'All over the place' Dons get act together

Essendon's Orazio Fantasia has conceded the Dons’ forward structure was “all over the place” earlier in the year, while suggesting the Bombers’ improvement has come from increased pressure around the ball.

The Dons have surged back into the finals race on the back of five wins from six games, including away victories over Greater Western Sydney and West Coast, as well as defeating fellow top-eight challengers Geelong and North Melbourne.

Despite the continued absence of 2017 best-and-fairest Joe Daniher, who hasn’t played since round seven because of groin troubles, the Bombers have started to click in attack, reaching triple figures for just the second time this season with a score of 19.11 (125) against the Kangaroos on Sunday. 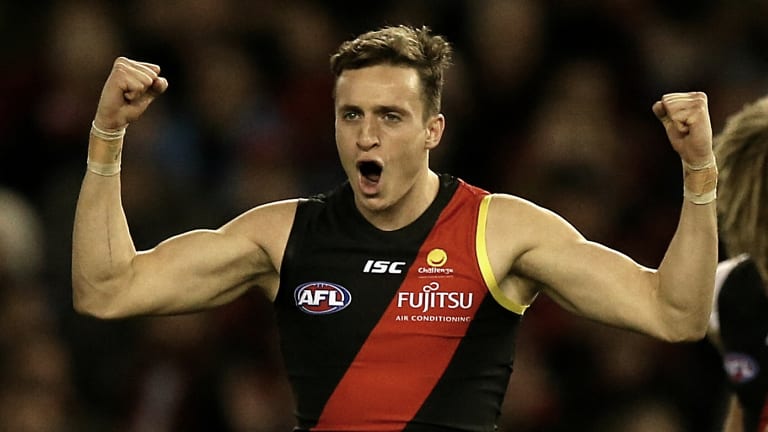 Fantasia, a member of the Bombers' leadership group, said the team had been somewhat disorganised inside 50 at the start of the season, but that things were starting to jell.

“We just focus on getting our structure right. Earlier in the year we were sort of all over the place,” Fantasia told The Age.

“We want our bigs competing down the line and our smalls, myself, Walla [Anthony McDonald-Tipungwuti], Greeny [Josh Green] when he’s up there, Dev Smith, Junior [Zach Merrett], the players up there getting to the front. Everyone’s got their role, and it’s just about playing that.”

Essendon benefited, too, from Fantasia’s return to form, with the pocket dynamo kicking four goals against North, receiving the maximum 10 votes in the AFL Coaches’ Association most valuable player award.

It was Fantasia’s best return in what had been a stop-start campaign. He had a delayed start to the season because of minor knee surgery before another setback kept him sidelined for three games between rounds five and seven.

Fantasia said he had not been back to 100 per cent until after the Dons’ mid-season bye.

“I feel a lot better now. I think earlier in the year I sort of didn’t have that continuity in my body,” he said.

“I got injured in the pre-season, and then injured again trying to come back too soon. Now I’ve sort of got that work in, and a couple of games before the bye, which is good.

“Now I’m starting to feel back to what I was last year.”

Essendon face second-placed Collingwood at the MCG on Sunday, with Fantasia arguing the Dons could still achieve something this year, so long as they kept up what they’d been doing lately.

“We put it down to our pressure and our contest. That’s the main thing. Our tackles have been through the roof in the last six or seven weeks, and that’s what we base our game on. We know when that’s on, and our pressure’s on, then we play footy from there.

“I think we just need to keep playing our brand of footy, and we know that can stand up against anyone.”

Daniher is still not running, and while the Dons have not yet put a line through him, the spearhead is no guarantee to return this season.

In his absence, and with James Stewart out-of-favour, Shaun McKernan and Mitch Brown have stood up as Essendon’s tall forwards. Fantasia said Daniher’s return would be a boon for the Dons, but said there was room for all three talls, pointing to Brown’s mobility as a point of difference.

The Bombers have a chance to stretch the Pies on Sunday following the season-ending knee injury to Collingwood tall defender Lynden Dunn, who joined fellow big men Darcy Moore and Ben Reid on the sidelines.

Important Bombers midfielder David Zaharakis is still around a month away from returning from a shoulder injury. Darcy Parish may, however, be available as he works his way back from a thumb and wrist injury.