Modern sports fans are savvy enough to see through a gimmick. If the athletes look like they would rather be tucked up in bed with a good book instead of pouring themselves into their work, the end product will suffer, then speed headlong towards its demise.

The ATP Cup wasn't exactly reinventing the wheel when it made its debut this week, but that's not to say there wasn't questions about where it would eventually fit into the calendar, its longevity and whether the players would buy in to yet another team event. 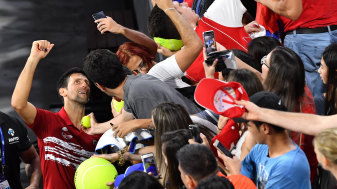 Novak Djokovic has led the Serbian charge in the ATP Cup, converting fans to the new event in the process.Credit:AAP

There is no mens draw at the Brisbane International, and Perth would probably rather have its Hopman Cup back, but, for its first running, the ATP Cup has not only shown signs of life but probably surpassed most expectations in terms of crowds, colour and buy-in from the competitors.

Australia, which has been campaigning through its group ties in Brisbane, have been among the leaders in trying to assure the masses that it's not a glorified hit-up ahead of the Australian Open.

With Lleyton Hewitt as captain, they were never likely to get away with going through the motions. In any case, Alex de Minaur, Nick Kyrgios and John Millman love playing teams tennis more than most. They have greeted every triumph, big or small, with roars of approval and the fans have responded in kind.

Perhaps the biggest endorsement for the format came from Novak Djokovic and the Serbians on Monday night against the French.

I showed my emotion because I really care about playing for Serbia. But I also care about being in a team with my friends.

With thousands of screaming Serbian fans urging them on, especially once the clock ticked past midnight to signal the Serbian Orthodox Christmas, Djokovic and Viktor Troicki celebrated wildly as they closed  out the doubles in a super tiebreak for a 2-1 win and a spot in the quarter-finals. The emotion was overflowing and real when the match ended at nearly 2am.

"I think you can see it on the court. I don't need to talk about it too much. I showed my emotion because I really care about playing for Serbia. But I also care about being in a team with my friends . . . these guys are some of the best friends in my life," Djokovic said.

"You saw the atmosphere, it was phenomenal. The Serbian people, I didn't expect so many of them to stay. Being on Christmas Day with us, post-midnight, it was amazing."

The ATP Cup is in its infancy but the appeal is evident. The WTA could do with a version of their own, should they be able to find a slot in the crowded calendar, and the fire and passion of teams tennis only makes you wonder further why the IOC don't adopt the format for the Olympics (the same could be said for golf).