Ex-Diamond Harby-Williams, who's dumping from the Netball Australia board last year led to a threat of strike action from players across the country, was unveiled as former international Lauren Nourse's replacement as ANPA executive officer last month. 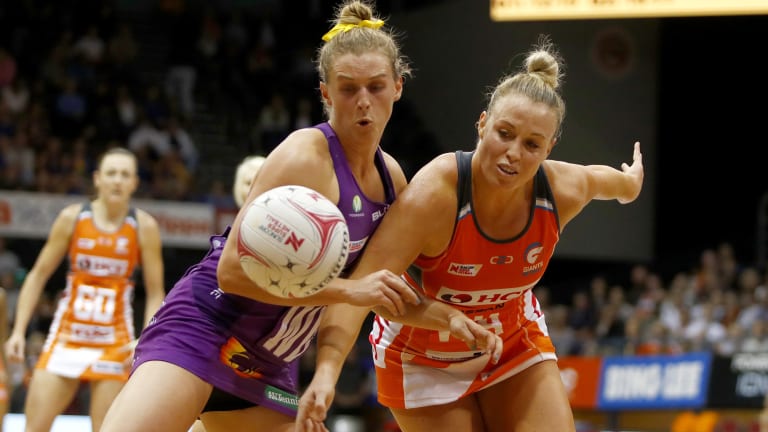 Hard work: The current minimum payment in Super Netball is just over $27,000 a season.

The appointment of Harby-Williams was widely applauded by players across the league, and she hopes to be a key cog in helping forge the next collective bargaining agreement.

Most Super Netball players are off contract at the end of this season, and the majority of players are expected to only sign one-year deals given the CBA expires in 2019.

Once a new CBA is reached, Super Netballers will be more willing to sign through to the end of 2021 when the new league's initial five-year broadcast deal with Channel Nine and Telstra comes to an end.

"We haven't got down to the specifics yet, but there has been some talk about the minimum wage and whether or not that's where it should be," Harby-Williams told Fairfax Media.

"It's all well and good to continue to add dollars to the top end but you've got to make sure you look after the bottom end just as well, so that's certainly one thing that's come to the fore very early."

Harby-Williams has long had the respect of past and current netball players, and her axing last April in a reshuffle of the Netball Australia board brought with it threats of industrial action and even talk of a breakaway league.

She began speaking to the ANPA prior to Christmas about the possibility of her taking on the job full time, and assumed responsibilities once her recent role with the Commonwealth Games Association finished.

On top of financial increases, Harby-Williams will also prioritise an improvement to the player welfare system which she believes is something the ANPA should offer on top of the Super Netball clubs.

"A massive one for me is the wellbeing, and player development space associated with mental health and training and education and so forth, that the Players Association can offer players something in addition to what their clubs offer," Harby-Williams said.

"In my first week we had a board meeting and it was very clear that we need to have, under the Players Associations umbrella, someone who's got expertise in dealing with people and with issues and also having some sort of network in terms of offering training and education.

"That's the message from the players, that they're keen to do things in their life aside from netball so that when they transition out of the game they feel well prepared.

"It's just having someone on board with that expertise and also working with the clubs to make sure that their minimum level of service from the wellbeing, welfare perspective that everyone's adhering to. It's working collectively but just giving the players someone to lean on when they need it outside of the club environment."