Melbourne Storm will hand Papua New Guinean back Justin Olam his long-awaited debut in their top-of-the-ladder clash with St George-Illawarra Dragons on Sunday.

When the Storm named their squad on Tuesday, Olam wasn’t in the 23 but he was brought into the team after centre Curtis Scott was unable to pass tests on his injured ankle and replacement Young Tonumaipea injured his hamstring at training. 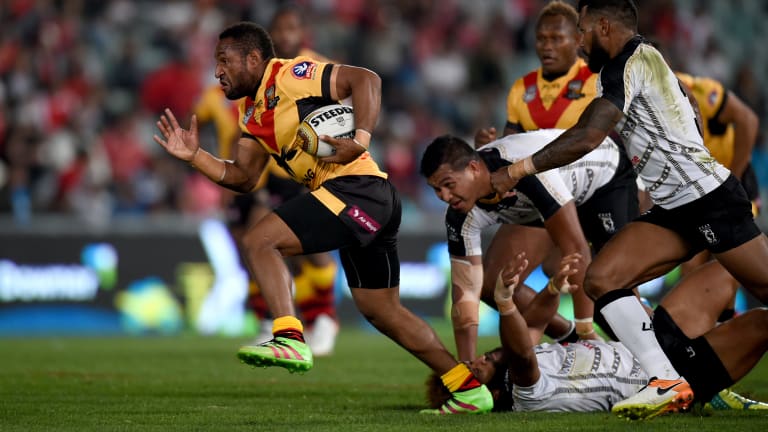 Olam has been on the verge of a debut since late last season and has repeatedly been named 18th man, or first emergency, repeatedly.

“Everyone here appreciates how hard he has worked to get where he is,” Ponissi said on Saturday.

“We were trying to count up how many times he has been 18th man and it’s more than you can count on one hand, when you watch players who are in that position their debut is so close they can touch it but it feels like it will never happen.

“So to see him told today was a great moment.”

Melbourne Storm coach Craig Bellamy had kept Olam on standby early in the week when both Scott and starting winger Suliasi Vunivalu were in doubt. Vunivalu has since been cleared to play.

Olam, 24, made his name in the Queensland Cup with the PNG Hunters and since signing with Storm for the 2017 and 2018 seasons he has impressed with feeder club Sunshine Coast Falcons.

Olum will follow in the footsteps of PNG and Storm great Marcus Bai but he will face a fierce first-up assignment at centre as Dragons counterpart Euan Aitken is rated a potential Origin player.

“Justin has been here since November 2016 so the players know him and he knows the players,” Ponissi said.

“He has had a great preparation for his debut and while there is no doubt the Dragons will test him down that side, the players around him will be aware of that and he will be expecting the traffic.”

While the Storm will celebrate seeing Olam make his debut, Tonumaipea’s injury during training on Thursday was a sad event as the Victorian has performed well in recent weeks covering for Will Chambers (suspension) and Vunivalu (injury).

The Storm said Tonumaipea would likely miss three to four weeks with the injury while Scott should be available for selection next round.

“Young had just found out he was going to play at centre in place of Scott and he was terrific for us on Anzac Day so it’s really disappointing for Young but now it’s next man up,” Ponissi said.

Lock Dale Finucane is set to return from a thumb injury and his tackling and hard runs will be much needed against the dangerous Dragons attack.

“Dale’s return is fantastic for us given Jesse Bromwich and Tim Glasby are out, we need Dale’s experience in there,” Ponissi said.

“We also think it’s good for Dale himself, we believe Dale is a chance for State of Origin, he is made for it, and now he has four games before the team is selected to put his name up.”

The Storm play the Dragons at Jubilee Oval on Sunday at 2pm.