Port Moresby: It is a sombre moment for the young Australian rugby league players at Bomana War Cemetery in Port Moresby. More than 3000 Australians lie here, having fallen during the defence of Papua New Guinea in World War II. It is personal for assistant coaches Neil Henry and Steve Hooper, whose grandfathers fought here.

This being PNG, and these being NRL players, the silence over the headstones is never going to last. Children from neighbouring villages cluster around the cemetery. A chant breaks out. "Peachey! Peachey!" Then: "Ben Hunt! Ben Hunt!" Soon the footballers, lifted from solemnity, are running high-fives along the line of children. Once in the bus, Chad Townsend throws his team shirt through the window. Another day of this unique voyage in sport. 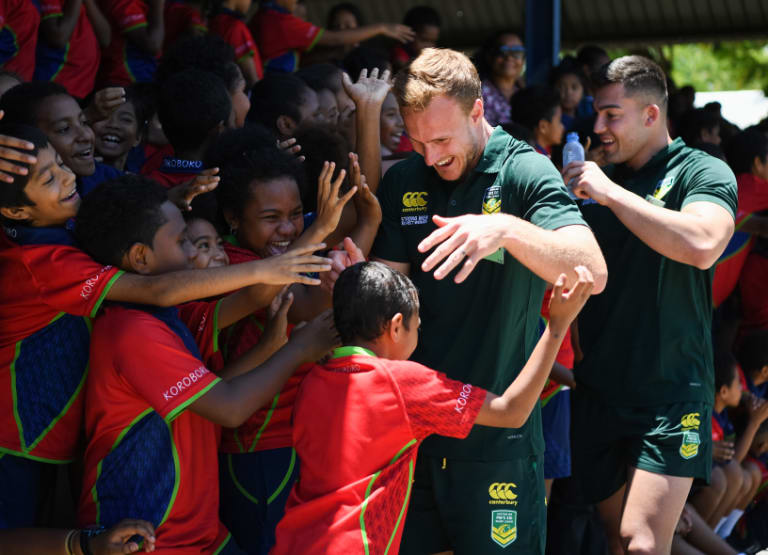 Rugby league’s grip on PNG is evident wherever the Australians visit. The team bus has a permanent escort of sprinting children. Fans camp outside the team hotel with hand-drawn portraits of Daly Cherry-Evans. Motorists, their mouths pink with betel nut juice, cruise alongside to shout hello. Even sullen roadside vendors raise a friendly hand. When a school visit is finished, the teachers have to lock the gates to stop the pupils running after the Australians.

The locals' commitment can be seen in young men such as Nelson Saimon, a league player who becomes the self-appointed helper at Australian team training. "I have known Adrian Lam since I was six years old," says Nelson of the 265-game Roosters and Wigan star who played for both Queensland and the Kumuls and is now on the Australian coaching staff. "He has my number and he texts or calls when they are in PNG. They respect me, they know me, they help me."

Nelson, a hooker-cum-half-cum-fullback for the Souths club in Port Moresby, hopes to represent the Kumuls, but for now he can worship his favourites Aaron Woods and David Klemmer up close.

Australia’s annual ventures to PNG are also a diplomatic vehicle with serious intent. With Port Moresby hosting the APEC leaders’ summit next month, the city’s infrastructure has been transformed by Chinese investment. China’s strategy of so-called "debtor diplomacy" was all the talk at the Australian High Commission’s reception for the league tour, and the sport is a package that contains the weight of Australia’s efforts to remain economically relevant in the region.

For the NRL, PNG weighs heavily in its strategy of international expansion. ARLC chairman Peter Beattie is keen to remind the sport that "there are eight million people in this country and we need to be smart in how we bring our game to them". 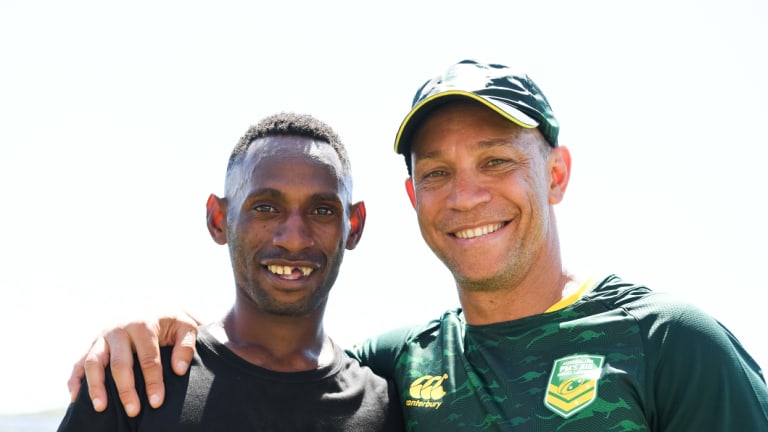 Under former NRL player and now head of international strategy Frank Puletua, the NRL is working to build on its advantages here: PNG is bigger than the other main Pacific league-playing countries Tonga, Samoa and Fiji, and unlike them it has little competition from rugby union.

At the social level of this diplomacy, the NRL is also projecting its message against sexual and family violence, which has a high recorded incidence in PNG. On Saturday, NRL community workers Alan Tongue and Emily Latu are busy running an on-field primary prevention anti-violence workshop with a local football club.

Tongue asks about certain behaviours – sledging, sexist language, whether paying "bride prices" mean a husband can control a wife – and players decide to stand either side of a line dividing acceptable from unacceptable. Several switch during the discussion, influenced by their peers. Some stay resolutely on opposite sides. 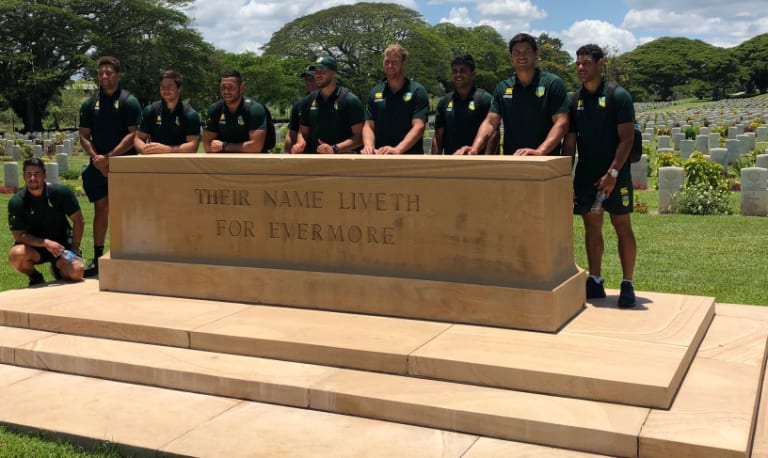 "The program is not about telling people how to live their lives, it’s about empowering them to say what direction they want to go in. It’s powerful when they say it, not when we say it," Tongue says later. "We have the same issues in our country. We just don’t want it to be a taboo topic, because otherwise it just repeats in family homes and workplaces."

Conducting the difficult conversations on the rugby league field is the key, Tongue says. "You get men in a room to talk about domestic violence, and everybody goes quiet. But as soon as you use rugby league, people start talking about what’s a healthy and happy team and football club, and then you can extend that to the community. Players get how making a mistake affects their teammate, their coach and their club. Violence also affects everybody around them. Using that common language has been really powerful."

Sport helped me find my resilience and self-esteem and connect me with people.

League is also trying to translate those words into action. The PNG parliament has no women among its 111 members, but the in-country manager, Cathy Neap, and more than half of the nation’s rugby league development officers, are female. Law enforcement is almost exclusively a male profession, yet the NRL is training 12 women referees.

The session ends with the team making three resolutions: to step in and help women in danger, to lead by example and to spread awareness. Tongue exhorts meaningful follow-up: "We can keep having slogans, but until we put it into action as men and own it, we’re not going to go forward as fast as we want."

It’s a message carried forward by 33-year-old Tahina Booth, Orchids front-rower and founder of the NGO Grass Skirt Project, which collects pre-loved sporting equipment in Australia to distribute in PNG communities. Having been sexually assaulted as a young girl, Booth says that "sport helped me find my resilience and self-esteem and connect me with people. Learning to catch and pass a football helped me take control of my body. What was
taken away from me, that’s mine, no-one can take it now."

Grass Skirt has already shipped 10 tonnes of sporting gear to PNG villages, Booth says. "When they ask me to donate footballs, I ask how many girls are involved, what their plans are in five or ten years, will they achieve gender parity. I want to help them build a pathway right through to the elite. Sports have to be accessible to everybody. I want them to look at us and say, 'Who is that woman? She’s boss.'"