If the Prime Minister's XI records one of the greatest upsets in the fixture's history and nobody was there to see it, did it really happen?

The lowest crowd in Prime Minister's XI history of 1824 watched the home side record an upset for the ages over South Africa by four wickets at Manuka Oval on Wednesday. 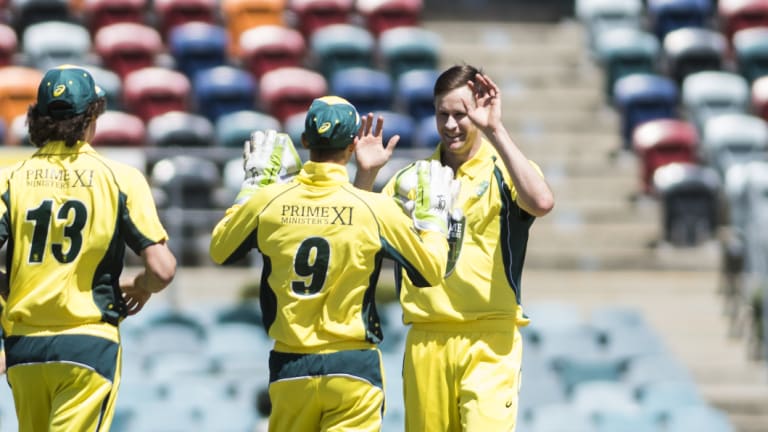 Just 1248 people were on hand for South Africa's innings, and anyone expecting a rush after the people of Canberra finished work would have been left sorely disappointed.

Two years after Allan Border said the Prime Minister's XI fixture was in danger of losing all relevance, the poor turnout could raise the alarm for cricket chiefs.

The crowd figure even shrinks in comparison with the lowest in recorded history, which was set when 5370 watched the West Indies face the Prime Minister's XI in 2010.

It serves as an indication of just how much content Canberra can handle given fans have been spoiled for choice this summer with a women's international, Big Bash League, WBBL, WNCL, Sheffield Shield and a Test match.

But the news is even worse for South Africa, who have dropped their lone tour game to a side featuring just three players with international experience – 128 caps to be exact, and 125 of those belong to Prime Minister's XI skipper George Bailey, who guided the hosts home with a sterling 51 not out.

South Africa will meet Australia in a three-match one-day international series beginning on Sunday and this outing suggests the hosts may not be the most vulnerable ones.

Canberra product Jason Behrendorff (3-35) enjoyed a roaring start when he claimed two wickets in the first four balls of the contest to put the Proteas on the back foot.

It was a dream homecoming for Behrendorff as he sets his sights on a return to the Australian team via the shortest formats, after halting his red ball aspirations for the summer in a bid to curb his injury woes.

Unknown Queensland prospect Blake Edwards (2-43) put his name on the map with two scalps before Usman Qadir (3-28) cleaned up the tail to leave South Africa with the fifth-lowest total by a visiting side in Prime Minister's XI history.

When Jack Edwards slashed Dale Steyn's first delivery to the fence it became clear this team largely made up of rookies might give the Proteas a scare.

Edwards was dismissed for 10 soon after with emerging Western Australia wicketkeeper-batsman Josh Philippe was the only one to offer any real resistance to an attack boasting Steyn and Kagiso Rabada.

Philippe showed class beyond his years before Lungi Ngidi juggled a catch on the boundary to remove him for 57 (53), and Imran Tahir had Sam Heazlett (2) caught and bowled moments later, waving his arms to a rabid pack of fans to celebrate.

Suddenly the Prime Minister's XI looked far from becoming the first home side to win this fixture since Julia Gillard's reign at the top of Australian politics.

Alas, Bailey and young gun Jason Sangha (43) combined to help the Prime Minister's XI record one of the most memorable victories in the concept's history.

It leaves Scott Morrison as one of just three political powerbrokers with a winning record in the fixture alongside Bob Hawke and John Howard.

If only the people were there to see it.