Within the hour of kick off in Sunday’s grand final, the NRL ground operations chief approached Storm football manager Frank Ponissi requesting permission for the Roosters to name a replacement for Cooper Cronk, should the injured halfback fail the warm-up. Mind games or genuine injury concerns?

Ponissi consulted with Storm coach Craig Bellamy, who referred the NRL man to the rule book, which states that the final starting 17 must be named an hour before kick-off, although replacements are allowed if a player is injured during the warm-up. 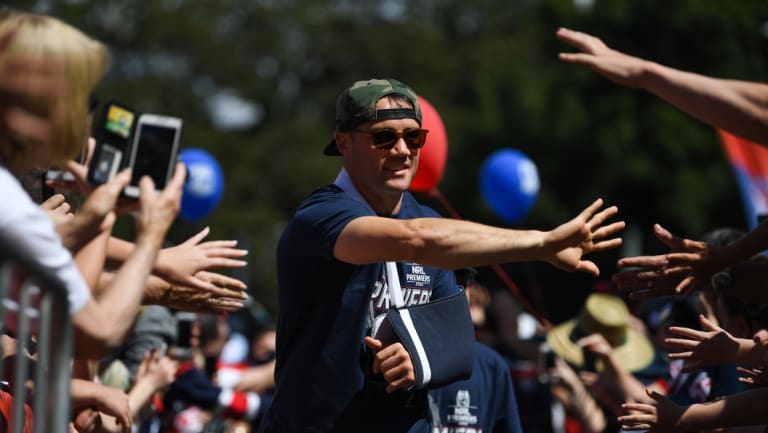 However, the injury must be new, such as a pulled hamstring, or twisted ankle. Pre-existing injuries, such as Cronk’s fictitious “severe rotator cuff injury”, which was later revealed to be a cracked shoulder blade, do not count.

Ponissi told Bellamy he believed the Roosters were playing last-minute “mind games”, whereas Bellamy simply refused the request, calculating that if Cronk withdrew before kick-off, the Roosters would be left with three replacements, rather than four, on the bench.

The Roosters’ doctor injected Cronk at 6.45pm, approximately three-quarters of an hour before kick-off, when their final 17 had already been announced.

Vision of Cronk alighting from the team bus, avoiding high fives from Roosters fans, suggests he arrived at ANZ stadium minus any local anaesthetic.

It’s likely the Roosters’ medical staff were concerned the pain-killing needles given to their star playmaker would not survive the warm-up, in which case their approach to the NRL grounds chief was genuine.

It’s going to be a long six months.

While Ponissi assumed it was a case of the “Roosters trying to play with our heads”, he insists the Storm were not distracted by the week-long drama of Cronk’s availability.

“We thought the doubts over whether Coops would play would affect their players more than ours,” Ponissi said.

The Storm reasoned that Cronk, the Storm’s former playmaker who was pivotal to Melbourne winning four grand finals, has spent his career keeping people guessing and this would impact on his own teammates. How wrong they were. 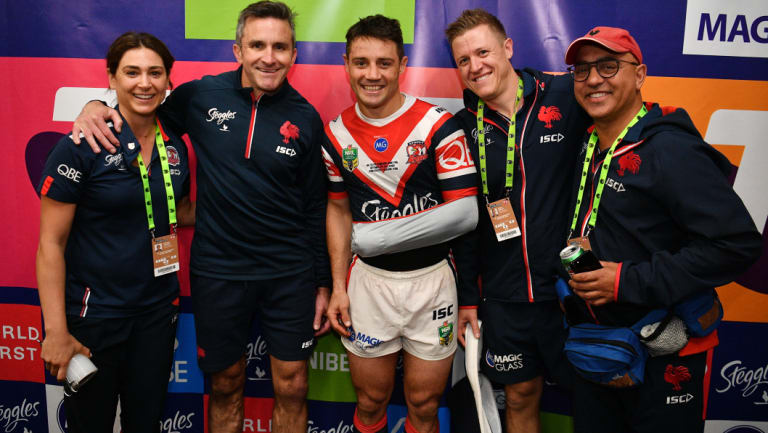 Winning team: Cronk with the Roosters’ medical staff after the grand final.

Cronk did take the field at kick-off time and had a limited physical involvement in the game while directing the play. His presence inspired his teammates, rather than creating distractin

g doubts over his availability. The Roosters have been ruled for 25 years by a car Czar but Uncle Nick (Politis) would have been happy to hand the steering wheel over to Cronk for the 80 minutes of the grand final.

Basically, the Storm were beaten by 12 men and, as Bellamy told his players after the match: “It’s going to be a long six months.”

Translation: It will take half a year for the Storm players to redeem themselves (to themselves) for such a tepid presence in a grand final.

The Storm’s big forwards were disappointing. Second-rower Felise Kaufusi, whose full-bodied hits on South Sydney’s Sam Burgess in the first semi-final set the tone for his pack, fired up in the grand final only after he had dropped the ball.

Maybe the Roosters’ error-ridden effort against the Rabbitohs in the second grand-final qualifying match gave the Storm players a false sense of superiority because they certainly lacked intensity.
Bellamy prefers to credit the Roosters, saying: “They jumped us early and we didn’t recover.”

Cronk’s first two kicks resulted in the Roosters first two tries but it was the line speed and kick-chase of his teammates that pressured the Storm into dropping the ball.

The only consolation to the Storm is that the Roosters’ unexpected loss to the exhausted Cowboys in last year’s grand-final qualifier meant that Bellamy’s men had an easier win in the 2017 decider.

But could the Roosters have defeated the Storm last year with Cronk in a purple jumper? In a profile piece on Cronk, written before the start of this season, I wrote: “ The Roosters have often said the player they missed most after winning the 2013 title was Sonny Bill Williams. It wasn’t so much his game-breaking play in the grand final as the dignity and professionalism he displayed throughout the season.

“It’s not as though the club needs rebuilding; simply that Cronk, like Sonny Bill, can turn a minor premiership into a major one.”