Nathan Aspinall inflicted Michael van Gerwen’s first Premier League defeat of the season but it was Glen Durrant who stole the show by going top of the table with victory over Gary Anderson.

Duzza is making his debut in the competition proper after appearing as a contender last year and after Van Gerwen was beaten by Aspinall, the winner of Durrant’s contest with Anderson was faced with the carrot of leading the early standings.

It was the Middlesbrough man who prevailed but Aspinall’s win over MVG was equally impressive as the early stages of this year’s competition have provided plenty of drama.

Thursday night was no different with a set of results that mean top and bottom are separated by just four points.

Only Daryl Gurney has yet to win a game, and he secured his first point with a draw against Gerwyn Price, while former Premier League runners-up Michael Smith and Peter Wright claimed their first wins of the season. 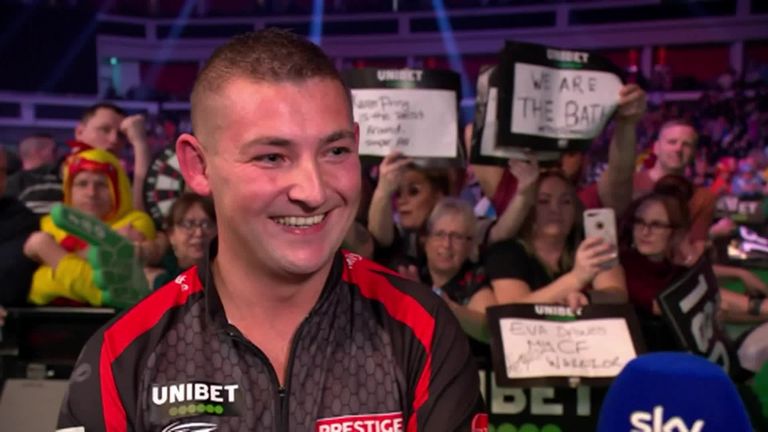 Aspinall was in fine form throughout a high-quality contest against Van Gerwen. The Asp eventually prevailed with a 7-5 success that sees him level the head to head against the Dutchman and draw level with him on four points.

A superb 110 finish gave Aspinall the first break of throw after the pair had split the first two legs and The Asp, beaten by Van Gerwen in the World Championship semi-final, consolidated to leave the world No 1 trailing 3-1.

It looked as though Aspinall’s chance may have gone when a missed a dart at bullseye for a 170 and another break of throw gave Van Gerwen a chance to mop up, which he took. 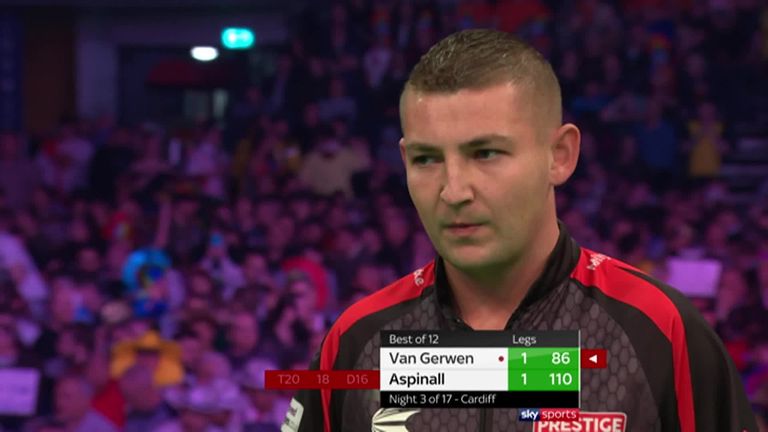 However, a second maximum helped Aspinall to lead 4-2 before a trademark Van Gerwen burst saw him win three legs on the bounce to lead for the first time since the opening leg of the contest.

After Aspinall levelled, the match turned into a best-of-three shoot-out and Van Gerwen’s two missed darts at double were to prove costly. Asp pinned his double and kept his cool to turn one point into two and a memorable win.

Duzza capped a dream start to his Premier League year by maintaining his unbeaten record and claiming a second win of the season thanks to another spectacular display of finishing.

Having beaten Smith on the opening night with a stellar display on the outer ring, Durrant’s finishing deserted him in a 6-6 draw with Fallon Sherrock last week, but he was back to his best with six combination finishes setting up a 7-4 win over former Premier League champ Anderson. 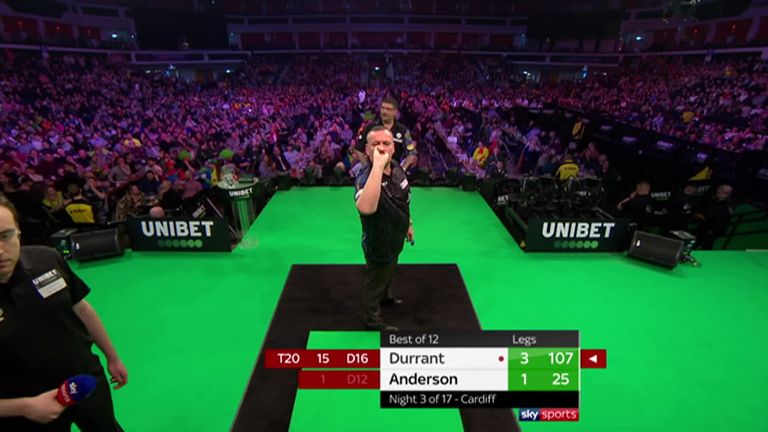 Having pinned double one for the opener, Duzza was in more ruthless fashion to clean up 85 for an early break of throw and a 2-0 lead.

With Anderson struggling to find his range, a 14-dart hold of throw gave the three-time BDO world champion a 3-0 advantage before the Flying Scotsman stopped the rot to claim the fourth on double three.

Two more followed for Durrant, a 12-dart break of throw and a brilliant 107 finish took him to within two of maximum points before Anderson’s mini-burst was kickstarted by a sizzling 122 in the seventh leg and a break back,

Another saw Anderson draw within two before Duzza grabbed a point to preserve his unbeaten record and then claimed the seventh leg he needed to go top of the pile. 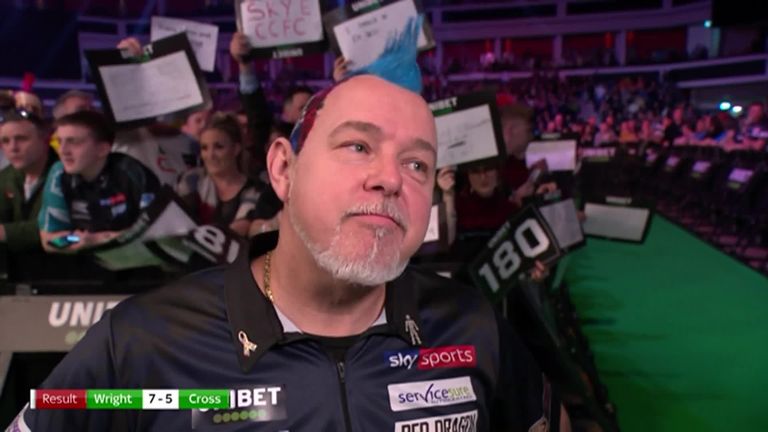 The reigning world champion came out on top against the former world champion, with Wright’s 7-5 victory enough to secure his first two points of this year’s Premier League.

The scoreline barely did the game justice with Wright averaging almost 30 points more than his opponent for the majority of the contest, but Cross scrapped his way through the match to force a decider.

Snakebite raced out of the traps, averaging 118 to win the opening couple of legs, including a break of throw against a struggling Voltage, who averaged just 68 for the opening pair.

After Wright had secured a third leg on the bounce, the man from Hastings stopped the rot to get on the board and when Snakebite missed his first two darts a double, Cross pounced with a brilliant 127 finish.

With the deficit at one, Wright ploughed on to take out the next two legs until another Cross outlier – a classy 80 finish – pulled the 2018 world champion back to within two. Snakebite eventually got over the line, holding off a Voltage comeback that saw him threaten the most unlikely of points. 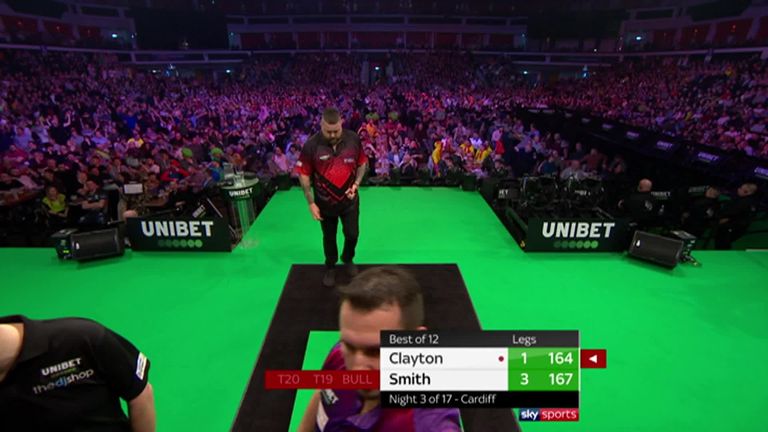 Clayton became the latest Challenger to come up short, walking into a Bully Boy whirlwind that saw him secure a first win of this year’s competition.

Smith averaged more than 105, hit 64 per cent of his darts at double and took out two huge finishes on his way to a 7-1 demolition that leaves the Contenders/Challengers record at five draws and seven defeats from their 12 matches over the last two years.

A switch of walk-on music for Clayton saw him serenaded to the stage by a Cardiff crowd who roared along to Tom Jones and Delilah, and the Ferret responded by taking the opening leg of the contest – but that was as good as it got for the man from Llanelli. Smith has shown some spectacular bursts of form on and off the TV stage this year and he exploded into life to reel off seven legs on the bounce, a brilliant 167 on the bullseye the highlight after Clayton had seen a couple of chances for a second leg go begging.

The Ferret was averaging more than 100 himself but four missed darts at double cost him across the opening five legs, and he wasn’t in the sixth as Bully Boy continued to power towards the finish line.

An 18-dart break of throw secured Smith a point and then a dazzling 142 secured a comprehensive victory. 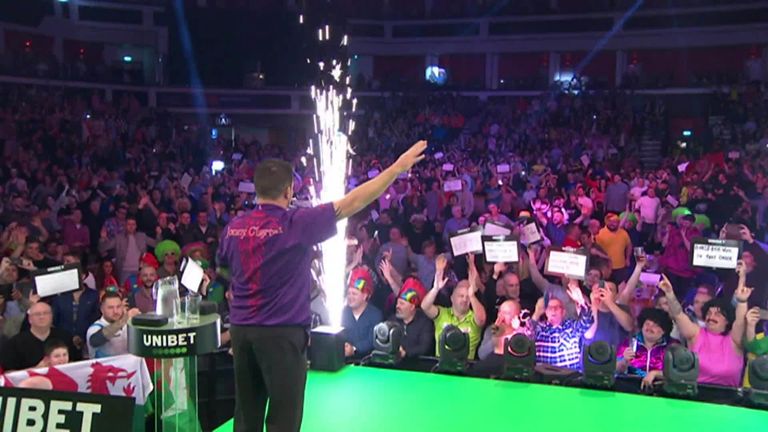 Gurney off the mark as Iceman draws again

It was honours even in the contest between Wales and Northern Ireland, Gerwyn Price even changing the colours of his shirt to red to delight the Cardiff crowd. 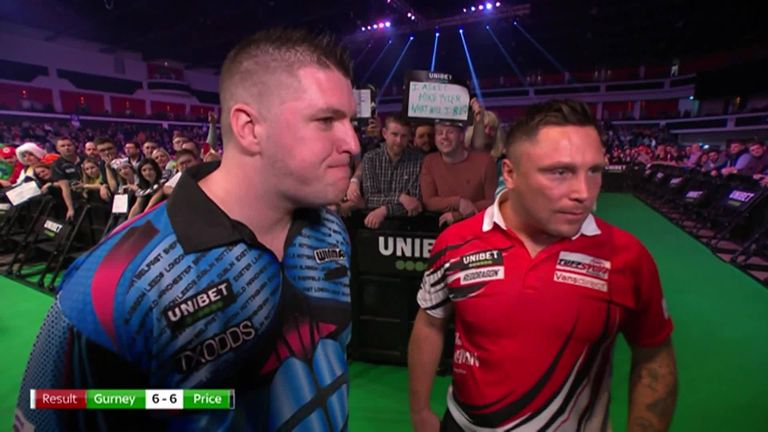 He ensured they went home with at least a draw after Clayton’s defeat thanks to another battling performance, winning a last-leg decider for the third successive week and securing a point.

While Price has been forced to battle across the opening two nights, Gurney has been out of sorts and for the second of three weeks, had to take on a hostile crowd.

Having taken on Gary Anderson in Aberdeen, Price in Cardiff was another test and the man from Derry coped admirably delivering his best performance so far.

Gurney was in the ascendency throughout, keeping his nose in front and averaging just under 100 in the process.

A break gave Price a 5-4 lead, but Gurney reeled off the next two to secure a point. Price was left needing the final leg to take a point and having done it against Cross and Smith, the Iceman was on the money again.