New Zealand netballer Maria Folau may not like it but the Waratahs will keep using her husband on the wing if the game requires it.

Folau took to Twitter to vent her frustrations during the Waratahs' 24-21 loss to the Blues at Brookvale Oval on Saturday night, asking why the team's star fullback, her husband Israel Folau, had been moved to the wing.

"OMG @NSWWaratahs why do you keep playing @IzzyFolau on the wing?????" Folau posted.

Folau started at fullback in his first game back since injuring his hamstring and sparking a storm with a controversial social media post about the gay community. He moved to the wing in about the 60th minute when the back line replacements were deployed.

It fell to the Waratahs' attack coach, Chris Malone, to interpret the Silver Fern's comments. He denied there were any tensions over where Folau played. 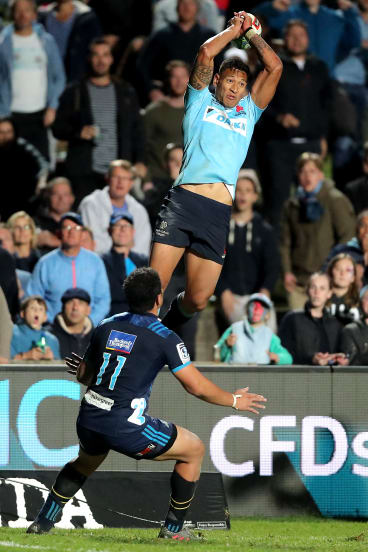 Rusty: A rare miss under the high ball for the Waratahs’ attacking weapon.

"He played 60 minutes of the game at fullback and 20 minutes on the wing. He knows he's going to offer a lot for the team, wherever he is on the field. And we give him licence to play.

"He was involved a lot. For a guy who'd just come back from injury, he had a really good game."

Folau topped the team stats for run metres (88), beat six defenders, made five clean breaks and 17 carries in a performance that saw him dominate under the high ball despite significant pressure from the Blues. Malone said it was no surprise the dual international didn't appear to skip a beat despite coming under heavy fire over the past month.

"He's professional. He's also a world-class footballer and he does his best talking when he's in between the white lines," he said.

Folau suffered the same fate as his teammates at times, making rare handling errors under huge pressure from a swarming Blues defence, but the Waratahs will persist with using him to ask questions of opposition defences.

"We all know he's a superstar in the air, even with a guy being lifted up against him, he still gets higher than they do," Malone said. "He's a freak in the air and we have to look to try to use that in the game as often as we can."

The Waratahs endured their regular review session on Monday morning before launching into preparations to play the Crusaders away on Saturday. 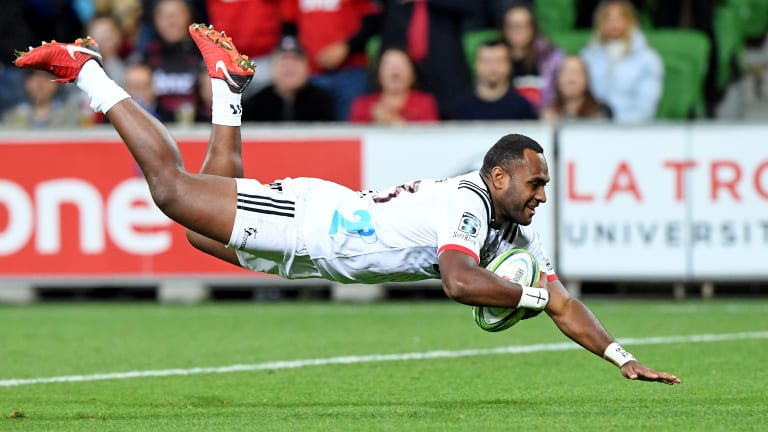 The defending champions are dominating again this year with a game built off what NSW hooker Damien Fitzpatrick called the competition's "benchmark pack". They have the second most potent attack in the competition, on a haul of 48 tries so far this season at an average of almost five per game. In contrast, the Waratahs made plenty of attacking raids on the Blues' 22 but were blighted by turnovers. Fitzpatrick said the team would concentrate on shoring up their work at the breakdown.

"They [the Crusaders] are probably the benchmark in a lot of areas across the game," he said.

"So far as to say where we'll go and get them, I think it's better for us to look at what we need to improve.

"We understand that our breakdown wasn't good enough and statistically that's where they're the strongest across the competition. They're incredibly competitive at the breakdown and if we're going to try do a job in Christchurch this weekend we need to improve our efficiency at the breakdown, that will improve our quick ball and hopefully we can convert some of those opportunities."

The NSW pack appears to be broadening its skill set, using the maul more often under forwards coach Simon Cron and improving their line out and scrum, although even their set piece work has suffered from the team's overall lack of finishing ability.

"We've worked pretty hard on that, there's only one way you can get good at mauls and that's doing them," Fitzpatrick said.

"Our forwards coach Simon Cron and our lineout leaders have been really good at picking certain times to do those and I think, technically, we're in a better position than we have been in the past to execute those.

"We had some really pay on teh weekend, we would have liked a couple more penalties or a couple more outcomes at the back of those mauls but … it's something we'll continue."