Manchester United's Champions League hopes are hanging by a thread after they lost 2-0 at home to Paris Saint-Germain in their round-of-16, first leg match and had talisman Paul Pogba sent off late in the game on Tuesday (Wednesday AEDT). 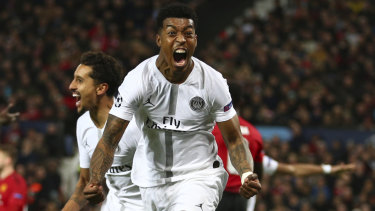 Second-half goals from Presnel Kimpembe and Kylian Mbappe gave the impressive French side a clear advantage ahead of the return in Paris on March 6 and Pogba's dismissal for a second yellow card in the 89th minute makes the task even harder.

It was United's first defeat under caretaker manager Ole Gunnar Solskjaer since he took over from the sacked Jose Mourinho in December and in many ways it was a reality check after 10 wins in 11 games domestically for the Norwegian.

United made a highly aggressive start to the game but too often their forwards chose the wrong option or failed to deliver the right pass, although Marcus Rashford and Pogba both tested PSG's 41-year-old keeper Gianluigi Buffon with near-post shots.

Thomas Tuchel's side gradually gained the ascendancy – with Marco Verratti and Marquinhos dominant in midfield – and Mbappe should have hit the target when he was slipped through by Julian Draxler in the 28th minute but fired wide. 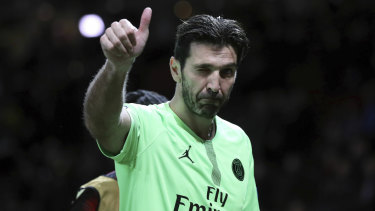 United had to play the second half without forwards Jesse Lingard and Anthony Martial, who picked up injuries, and their night got worse in the 53rd when Kimpembe ghosted in unattended at the back post to volley home a corner from Angel Di Maria.

Former United winger Di Maria, booed from the outset by sections of the crowd, had the last laugh when he collected a fine pass from Marquinhos and set up Mbappe for the second goal.

The Argentine broke down the left and delivered a low cross which was expertly turned in, first time, by 20-year-old France World Cup winner Mbappe who showed lightning speed to get ahead of the United defence.

A disappointing night for United became worse when midfielder Pogba sent off for a second booking after a foul on Dani Alves. 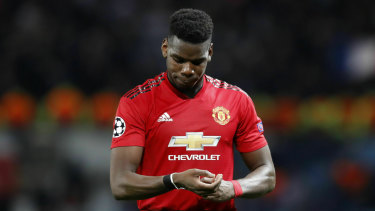 Red card: Manchester United’s Paul Pogba leaves the field after being sent off to compound a disappointing night.Credit:PA

In Rome, 19-year-old Nicolo Zaniolo struck in the 70th and 76th minutes in Roma's 2-1 victory over visitors Porto.

Substitute Adrian Lopez secured Porto an away goal in the 79th minute.