Punches, errors and blunders reigned as Melbourne Storm were thumped by Manly Sea Eagles at AAMI Park on Saturday night.

The Storm have been called many things, but “sloppy” has never been one of them – until this night where 16 errors from the home side and the send-off of Curtis Scott for punching helped a gritty Manly to a 24-4 win. 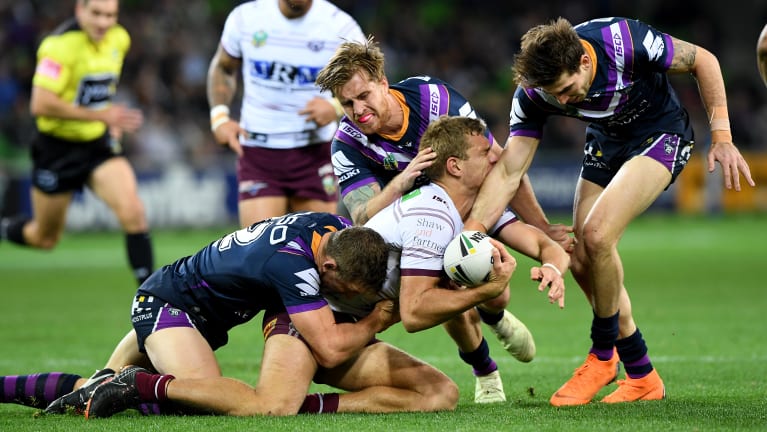 With captain Cameron Smith out through a suspension and the Storm already struggling with errors this season, the home side looked unrecognisable in attack due to their lack of direction.

Outside of two Cameron Munster penalty goals from 10 metres out, the only time the Storm hit the target was when Scott was goaded into throwing a series of punches at Manly’s Dylan Walker during 52-minute melee with Manly halfback Apisai Koroisau also involving himself in the fight.

Scott was sent off and both Walker and Koroisau given 10-minute visits to the sin bin, but it did nothing to correct the Storm’s woes as they lost 24-4.

There will be a debate post game about whether they served the full 10 minutes or were allowed on early, with Fox Sports commentators claiming they were allowed back one minute and 46 seconds early.

Smith is set to return next game and his return will be welcome, but until the Storm correct their ball-handling problems their title defence has no chance of succeeding.

Smith’s absence stood out all the more in kicking situations as Ryley Jacks and Munster were left to do the kicking, and neither could make an impact with the boot.

Daly Cherry-Evans did kick over a penalty goal to make it 2-0 and the Storm briefly lost stand-in hooker Brandon Smith to a concussion assessment, leaving Harry Grant to make his NRL debut off the bench.

But then the Sea Eagles had their own penalty woes, conceding a string of penalties allowing Munster to tie the scores 2-2 with a penalty goal. 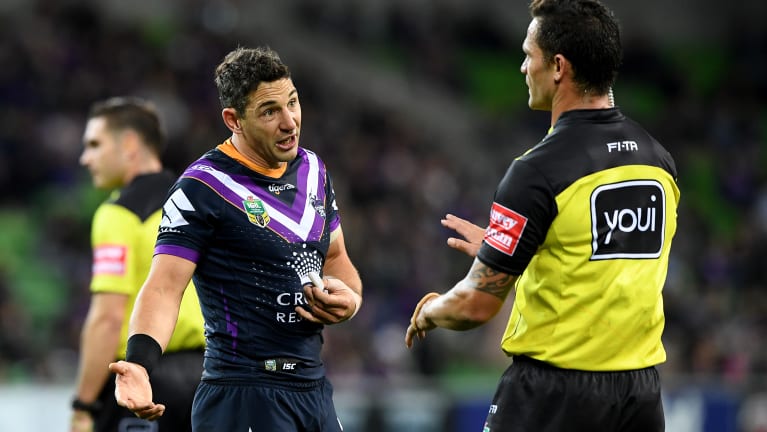 Storm full-back Billy Slater pleads his case during a match that kept the referee on his toes.

The referees eventually lost patience with Manly’s indiscipline, with lock Jake Trbojevic sent to the bin for 10 minutes for a professional foul on Kenny Bromwich just before half time.

The Storm’s seventh error of the half saw them lose possession soon after that whistle, leaving it 2-2 at half time.

More Manly penalties let Munster give the Storm a 4-2 lead with another penalty goal, but soon after the visitor took a shock lead.

With the ball in Manly’s attacking half, Cherry-Evans looked to be kicking for touch at the end of a set, but his grubber kick deflected off Curtis Scott’s heal and rolled into the in-goal, where winger Matthew Wright chased it down, leapt and touched it down for a try.

Like so many Manly and Storm games in the past, this game had an edge throughout the night and it exploded just after 50 minutes when Scott and Sea Eagles star Dylan Walker came to blows and both sides descended into a melee.

Scott has rarely shown a temper in the past, but the young centre was shown clearly throwing punches and one landed, partially closing Walker’s eye.

After deliberations, Scott was sent off while Walker and Koroisau were both handed 10-minute visits to the sin bin for their roles.

With 12 players on 11 the Storm should have had the advantage, but they couldn’t find any cohesion and impressively the visitors worked a play on the left side, with winger Akuila Uate scoring in the corner making it 10-4.

Both Koroisau and Walker returned amid protests from Storm football director Frank Ponissi who appeared to complain that they were returning two minutes early as he signalled two fingers to the officials bench.

A check of the game clock appeared to show they ran back on one minute and 46 seconds too early, but that figure had not been confirmed by the NRL.

Will Chambers was held up on the line with 15 minutes to play as he attempted to score a try, Manly’s Tom Trbojevic scored soon after to lock in the win before Manly newcomer Trent Hodkinson kicked two late penalty goals.

Josh Addo-Carr put in a superb chase to catch Tom Trbojevic when he broke away with four minutes to play, but he stood up and walked over the ball as Trbojveic tried to play it back so was sin-binned for the final minutes.

The Storm finished with 11 men on the field and on the last play of the night Moses Suli scored a try to cap off Manly’s determined display.