Triple premiership forward Paul Puopolo feels he can extend his AFL career into 2019 but says he is yet to start contract talks with Hawthorn, instead focusing on an impending finals campaign and the chance to “start a new legacy” at the Hawks.

Puopolo, who turns 31 in December, is an unrestricted free agent, coming to the end of his eighth season at Hawthorn. Taken as a mature-age recruit from South Australia deep in the 2010 draft, Puopolo has been a mainstay of Alastair Clarkson’s side in the enormously successful period that has followed, with the ferocious tackler featuring in six finals series and four grand finals, three of which yielded premiership medallions.

His last two seasons have been injury interrupted, with groin issues hampering Puopolo in 2017 and a hamstring injury sidelining him for a month earlier this year. But he has returned to play 13 straight games, taking his career tally to 165.

With 16 goals and 70 tackles from 17 games this year, Puopolo has been a solid contributor, and he said he had learned from evergreen veteran Shaun Burgoyne to ensure his body could withstand the season’s rigours.

Puopolo said he would put his hand up to play again next year.

“I definitely feel like I can keep playing,” he said.

“I haven’t really spoken to about it to them. I’m willing to wait until the end of the year anyway, I’m just concentrating on footy at the moment.” 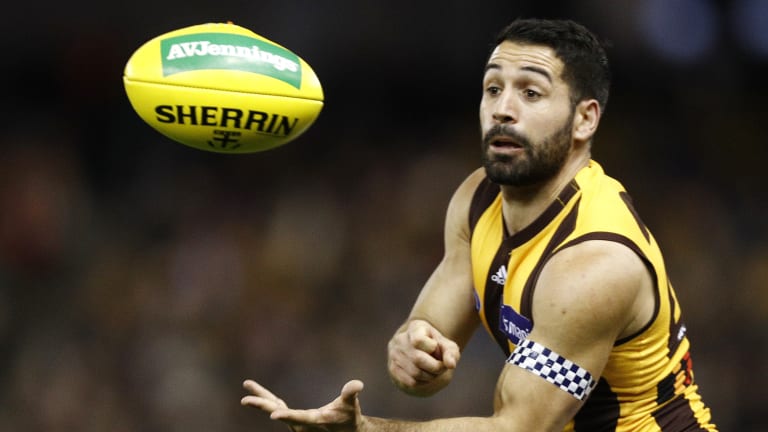 Burgoyne has re-signed for 2019, although Brendan Whitecross, Ryan Schoenmakers and Taylor Duryea all remain unsigned as unrestricted free agents. Jarryd Roughead, James Frawley and Grant Birchall are all contracted for next season.

Puopolo is set to play in his seventh finals series with the Hawks booking their September spot. They take on Sydney next Saturday night at the SCG, with the winners to secure a top-four finish. Puopolo was excited about the opportunity.

“A lot of guys haven’t played finals, so they’re really excited, and we’ve got some experienced guys who are willing to get back into it. I think it’s going to be great for the club to get some of these guys exposed to finals footy and hopefully we can keep building from this and start a new legacy going forward.”

Key defender Frawley will be assessed this week as he deals with a jarred back suffered in Saturday night’s narrow win against St Kilda. Already without Birchall (knee) and James Sicily (wrist), the Hawks’ backline could be particularly depleted for the date with in-form Swans superstar Lance Franklin if Frawley is not cleared to play in the final round clash.

Captain Roughead (ankle) will also be monitored after missing two games through injury. Youngster Daniel Howe still has another game of suspension to serve, however Hawthorn's depth has held up well this year, with Irishman Conor Nash and midfielder James Worpel both impressing in recent weeks.