Ben Cunnington is notoriously reluctant to bask in the media spotlight, so getting him to talk about the incredible season he’s putting together was always going to be a challenge.

Unsurprisingly, the star North Melbourne midfielder wasn't keen to do interviews this week.

But fortunately, Kangaroos midfield coach Darren Crocker was more than happy to chat about Cunnington and how important he has been to the side’s surprising resurgence in 2018.

After eight rounds, the 2014 best and fairest leads the club for disposals, clearances (seventh in the AFL) and contested possessions (fifth in the AFL), and is third for tackles.

Last round, he broke the league record for contested possessions in a game when he racked up a staggering 32 against reigning premiers Richmond. 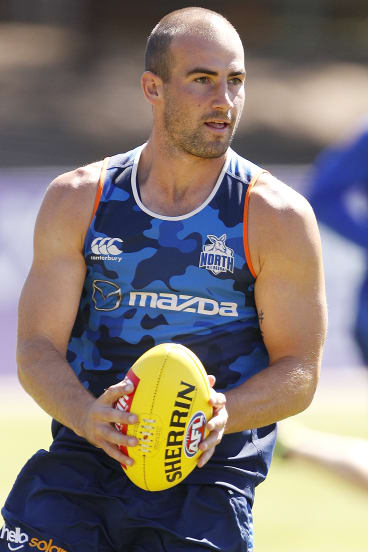 Mr Consistent: Ben Cunnington likes to let his actions to the talking.

According to Crocker, who is also the club’s director of coaching, it’s Cunnington’s relentless pursuit of perfection that is driving arguably his career-best year.

“Ben’s a great one for always wanting to look at where he can get better,” Crocker said.

“When he comes up, he’s not one that needs to see all the things that he does well even though as coaches you want to show him that because you want him to build and grow his strengths in the game.

“But he’s one for wanting to come up and say, ‘OK, just show me where I can get better. What can I get better at? What do I need to go and train this week to improve that?’

“I think he’s just one of those guys that is great to coach, they’re never, ever happy with where they’re at and ‘Boomer’ [Brent Harvey] was the same – as good as Boomer was, they always are looking to try to improve themselves right throughout their career.”

After 173 games and nine seasons, Crocker believes Cunnington is finally getting the recognition he deserves from the footy world.

“Probably internally we’ve always rated him extremely highly, especially with what he’s done over the last four or five years and that improvement that he’s made and we believe he’s always been building towards being an elite midfielder in the competition and an elite contested ball winner,” Crocker said.

“On the back of a 32-contested-possession game, it just has brought that to the fore, and brought it out to the general footy public.”

And at just 26, Crocker believes that Cunnington’s best is still ahead of him.

“He’s always been one that needed to just play good football to really believe in himself and I think the last few years he’s really started to feel like he is a really good player.

“That’s taken a little while for him to arrive at, but I think he’s now getting to that point where he believes he can be one of the elite players in the competition.”

He’s not going to say a hell of a lot in meetings but when he does say something, it obviously carries a lot of weight.

Cunnington might be a man of few words, but when he talks his teammates listen. He has become a great role model for both the younger players and the more established hands at Arden Street.

“He’s a pretty quiet, uncomplicated guy but when he says something, the younger guys really admire him and respect him and will listen,” said Crocker, who played 165 games for the Kangaroos including the 1996 premiership.

“He’s been terrific with [stoppage coach] Jarred [Moore] and I, sitting in on some of the younger players’ vision, just throwing in little bits of advice that they just absolutely hang off because it’s coming out of his mouth and that is the best form of coaching as far as Jarred and I are concerned.

“When you get a player being able to coach the players himself and give them little bits of advice, we can just sit back and allow that to unfold.

“I’m sure the older guys, the leadership group, everyone respects the way he goes about his footy. He’s not going to say a hell of a lot in meetings but when he does say something, it obviously carries a lot of weight.”