Quade Cooper must swallow his pride and pack his bags

The weakness of the modern day footballer is a sin so old it is among the seven deadly ones.

Pride is a terrible thing and it is turning Quade Cooper into a caricature of himself. 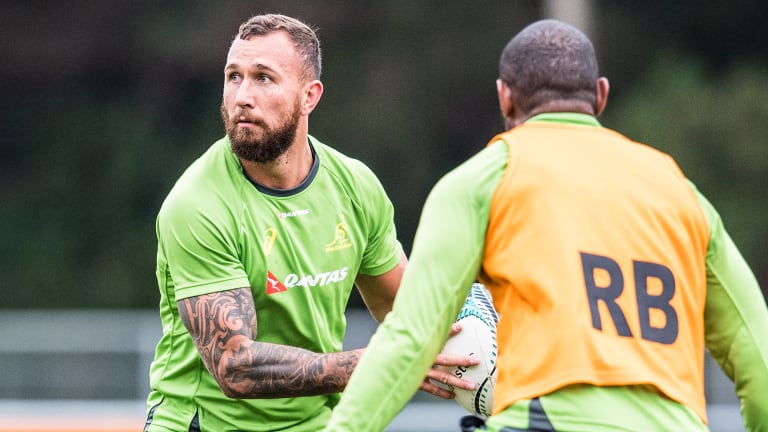 These days, the sin takes its form in the narrative players create for themselves on their social media accounts.

To them the world is nothing but a stage created to act out their dreams and ambitions or, god help us all, travel on their "journeys".

There is rarely any recognition of the wider welfare of the game they play. For Cooper, there is no mention of making the Reds better, or the Wallabies better, just his wish to sate his own desires, to accomplish his own journey.

And as for the greater good of Australian rugby, which has compensated him richly over the years, it probably barely crosses his mind that he might, on the cusp of 30, be approaching the age where giving something back is right thing to do.

Clearly, he could if he wanted to.

Cooper has been up and down as a player but you can understand the desire for the Brumbies and Rebels to get him involved.

He is experienced and, even more importantly, his name still carries enough cache to put backsides on seats, in Canberra or Melbourne – and Brisbane.

The Reds host the Rebels in July – you would imagine that a few thousand inquisitive souls would turn up to watch Cooper play for the Rebels against Brad Thorn.

It is no surprise, therefore, that Rugby Australia is frustrated at Cooper's stance. The Super Rugby clubs are crying out for any sort of financial boost and yet are being denied one because one player is not playing ball in a very real sense.

His aim – to regain his Reds place – is laudable in isolation but in context of the Reds' consistent and firm statements that the door is closed you have to wonder at the wisdom of it all.

Yet there is a wonderful opportunity to benefit the game as a whole but Cooper seems strangely opposed to it.

And so we arrive at the heart of the question. Cooper is signalling that he owes the Reds, or the game, nothing.

Why should he give them what they want when it was they who ditched him? would appear to be his reasoning.

It is the same war against authority which he has always waged, beginning with his falling out with the only coach who guided him to a win against the All Blacks.

Perhaps he is holding out for some sort of financial settlement from the Reds, to which he might reasonably be owed given he is only in the second year of a three-year deal he signed in good faith.

Alternatively he may not yet have progressed beyond his initial reaction to Thorn's decision to drop him: shock, anger and resentment.

Regardless he is now in a situation that is damaging both the Reds and Australian rugby.

Yet Cooper can still recover from this mess and write a different ending.

First, we need to take the Wallabies out of the equation.

Cooper was quite clearly cold shouldered by the Wallabies last year and he is well within his rights to be suspicious of messages from the Wallabies management that he can win his way back in.

They are so clearly at odds with how the selectors saw the pecking order in 2017, with Reece Hodge and Duncan Paia'aua while Cooper had to be content with a meaningless audition with the Barbarians side.

However, the high road is still his to take.

Go down the Brumbies, go down to the Rebels and play some good footy. If the Wallabies selectors' hands still can't be forced then put it on them to justify the exclusion.

Even if they can't be won over Cooper will pick up some admirers on the way.

His present stance can only appeal to his loyalists, particularly when on the other side of the continent there is a a group of players who would run through brick walls just for the opportunity to play Super Rugby level.