The local Queen's Birthday derby between the Vixens and Magpies will become an annual event, having been one of the one-off successes of a Super Netball season that ended with modest overall increases in attendances and TV viewership but a more significant rise in streaming numbers.

In June, a crowd of 8647 witnessed a narrow Vixens' win at Melbourne Arena – effectively guaranteeing that the first all-Melbourne fixture for 2020 will again be played before the AFL's Melbourne-Collingwood equivalent – also supporting the Fight MND cause – at the adjacent MCG. 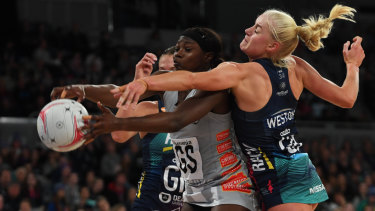 By comparison, 7760 attended Sunday's grand final in Brisbane, where the Sunshine Coast Lightning hosted the triumphant NSW Swifts in a game that won its TV timeslot, reaching more than 900,000 people through a 34.1 per cent audience share.

Overall, there was a 3 per cent rise in attendances in SSN's season three, with the 2018 numbers having risen by 13 per cent on 2017 with the help of more family-friendly scheduling.

Average five-city metro viewership on Nine over the season was up 2 per cent, which was well below the 26 per cent jump from 2017 to 2018 – although that bump had much to do with the move to Nine's primary channel from 9GEM. Nine is the owner of this masthead.

Nine's head of netball Keeley Devery said the competition continued to go "from strength-to-strength both on and off the court", with two seasons remaining on the current broadcast deal, while Super Netball CEO Chris Symington hailed the achievement of year-on-year growth in all metrics.

"Obviously the move from Gem to main channel was a great move in terms of accessing a larger audience … and this year was going to be really interesting to see how we then performed year-on-year, and we're really excited by the fact that we're continuing to grow," Symington said.

The World Cup break and subsequent late finish, plus the federal election, were among the factors to have impacted slightly impact on broadcast numbers, said Symington, who admitted that some "pretty ambitious internal stretch targets" were not met.

"But if we can continue to raise the bar year-on-year then that's only going to be a positive thing as we head into the last couple of years of the [broadcast] agreement and start talking about what it might look like beyond that," he said.

"The general feel in terms of the meetings and the conversations that we've had [with Nine] is that we'd all like the numbers to be bigger, just for the fact that we know it's a great sport."

"The whole campaign this year was 'see what we're made of', so our challenge continues to be to just get more people along to the game and more people watching on TV. But the numbers at the moment are heading in the right direction, and everyone's really happy with the way it's performing."

Streaming-wise, viewership for match replays on 9NOW leapt by 34.1 per cent, while live streaming on Telstra TV and the Netball Live App rose by 27 per cent – including a record-breaking round 13 clash between the Vixens and Lightning.

Meanwhile, the Vixens' defensive circle trio will remain intact for 2020, with the club set to announce the re-signing of Kadie-Ann Dehaney when the list of contracted players is released on Tuesday.

SSN teams are permitted to sign athletes who had not recommitted to their current clubs by Monday, and Dehaney's signature means she will extend her defensive partnership with Jo Weston and Emily Mannix into a third season.

The 192-centimetre Jamaican provides a valuable tall option at the back for coach Simone McKinnis, who must replace retired wing defence Renae Ingles, also has a midcourt vacancy to fill and several shooting positions to finalise.

"Kadie-Ann gives us a great option, and probably her form post-World Cup wasn't great, but I know what she is capable of and she allows us to have a bit of flexibility back there," McKinnis said.

"So working across what that wing defence/goal defence or wing defence/midcourt position looks like is the next part to that."