The Queensland Reds are kicking themselves after almost derailing the red-hot Hurricanes in a 38-34 Super Rugby loss in Wellington.

In one of their best performances of a patchy season, the Reds' pack took it to the competition-leading hosts on Friday night before the class of the competition leaders won out. 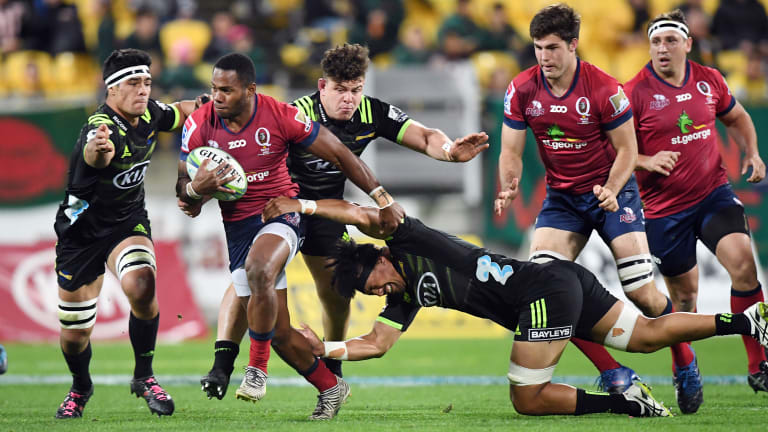 Filipo Daugunu of the Reds (left) evades a tackle of Ardie Savea of the Hurricanes during the round 14 Super Rugby clash on Friday.

Coach Brad Thorn still found it hard to praise his side, who he had fully expected to respond to their Tokyo efforts.

"You'd hope so. Six days earlier was embarrassing," he said.

"The guys went out there, put on their Queensland jersey and competed.

"It was disappointing in the end, though. We kept on getting ourselves in the game, played some good footy but some basic errors just really hurt us."

Prop Taniela Tupou was unstoppable from close range to score the opening Reds' try and employed his uncanny speed and power to set up their third to winger Jordan Petaia.

Outside centre Samu Kerevi enjoyed his best performance of a modest season, superbly creating Filipo Daugunu's first-half try with a sizzling burst and crossing himself late to set up a nervous final six minutes for the Hurricanes.

In a key moment midway through the second half, referee Ben O'Keeffe deemed Hurricanes debutant Peter Umaga-Jensen had made a genuine attempt to intercept a Daugunu pass which would have put Aidan Toua clear.

The Reds believed it was deliberate knock-on and warranted a yellow card although captain Scott Higginbotham was composed later.

"Consistency is just the biggest thing in the game at the moment that every team wants," he said.

Fit-again No.8 Higginbotham impressed in his first game in a month.

He wants his side to not revel in merely pushing the competition heavyweights in close encounters.

"We had our opportunities and a bit of it was our own fault, why we didn't win that game."

Ben Lam crossed twice for the Hurricanes to give him 14 tries for the season.

The powerhouse winger, who left Daugunu grasping on several occasions, would have equalled the competition record for tries in a season if he hadn't spilled the ball over the line with a lazy attempted grounding.

The other Hurricanes' tries went to Beauden Barrett, Blade Thomson and Sam Lousi.

Barrett and opposing Reds five-eighth Jono Lance landed all 12 shots between them in a high-quality contest.