Rabbitohs hooker gives Knights a dose of the blues

Damien Cook’s NSW State of Origin chances have received another boost as he helped South Sydney to a comfortable 36-18 defeat of Newcastle.

With the Rabbitohs hanging onto the match at 22-12 on the back of a 94 per cent completion rate, Cook put the game beyond doubt midway through the second half when he broke free to run 30 metres and score. 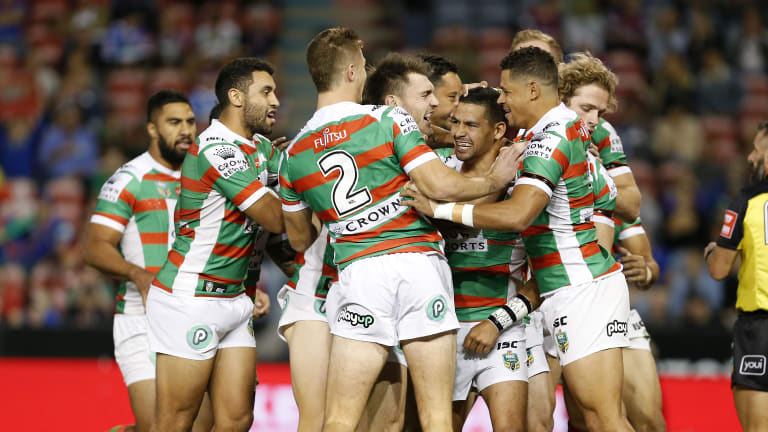 That’s the way: Cody Walker is embraced by teammates after scoring against the Knights.

The 26-year-old Cook topped 90 metres for the ninth consecutive time this year to maintain his status as easily the best running hooker of the competition.

Fittler has already indicated he could carry a second hooker on the bench, meaning he and chief rival Cameron McInnes are both a chance of selection.

Five-eighth Cody Walker turned in an emotional display just two days after the death of his mother Lou.

He put Alex Johnston away in Souths’ first set for a trailing Robert Jennings to score, before he took their lead to 12-0 moments later when he barged over himself.

It gave Souths a lead they never relinquished. His halves partner Adam Reynolds then put young winger Campbell Graham, but the Knights scored twice just before the break to go to the sheds at 16-12.

The Knights should have drawn level early in the second through a sensational Ponga cut-out ball but winger Ken Sio lost the ball on grounding.

Sio’s pain was compounded when in the ensuing set he dropped a Reynolds cross-field kick and former Knight Dane Gagai was on the spot to score.