The two biggest personalities in rugby league, Wayne Bennett and Russell Crowe, will come together at the NRL’s biggest club.

In what will be a straight swap for Brisbane-bound Anthony Seibold, South Sydney has trumpeted the signing of Bennett on a two-year deal from 2020. There is every chance the switch could happen with immediate effect if the clubs can negotiate a deal that results in neither of them having to pay out coaches for the remaining year of their contracts. 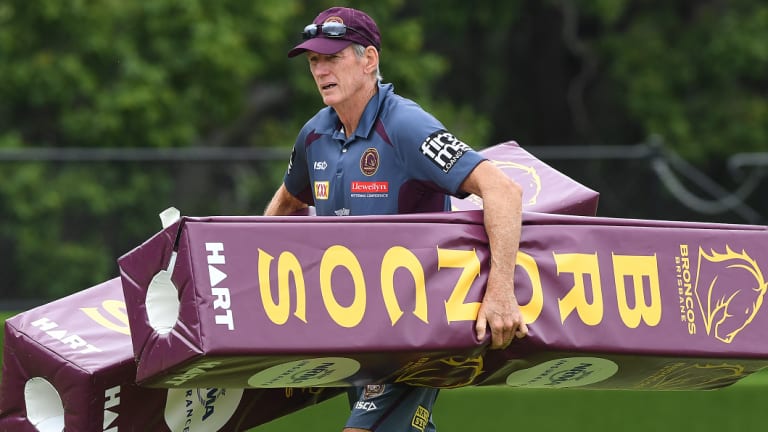 Packing up: Wayne Bennett will coach an inner Sydney club for the first time.Credit:AAP

The move will give the Broncos the man they believe is ‘the next Wayne Bennett’ in exchange for the current one. Meanwhile, the Pride of the League jags arguably the greatest coach in the game’s history.

Both clubs believe they have pulled off a coup. In Souths’ case, it was a long time coming. The Rabbitohs thought they had their man back in 2012 when Bennett finished up his Dragons stint. The veteran mentor’s decision to instead join Newcastle didn’t go down well in Redfern and appeared to end any hopes of the union happening in the future. But at a time when Ivan Cleary is heading back to Penrith and the Sea Eagles have rolled out the maroon and white carpet for Des Hasler, there is a new pragmatism sweeping the NRL clubs horsetrade in the most frenetic coaching shake-up in the game’s history.

Only time will tell which club has come out of it best. However, Souths believe they can go even further than this year’s preliminary final appearance with Bennett. They had been strung along by a rookie coach since June, when Fairfax Media revealed Seibold was Brisbane’s prime target after missing out on Craig Bellamy. Now they have a seven-time premiership winning mentor coming to a club that is part-owned by an Oscar-winning actor, adding further star power to a club that has never lacked historical significance.

“I’m truly humbled by the opportunity to coach the South Sydney Rabbitohs,” Bennett said in a statement.

“Souths is one of the iconic clubs in the game. I didn’t think I would get this opportunity, but that opportunity has now come for 2020 and 2021.

“I’m really grateful for the chance to be part of the club and I’m looking forward to being part of The Rabbitoh Way.”

In what will likely be Bennett’s final gig – he will be 72 years old by the time his Souths contract expires – he will have the resources, roster and support required to potentially win a grand final with a third club.

“Wayne is one of the best, if the not the best, rugby league coaches of all time and we are excited to see what he can bring to our club,” said Souths’ football general manager Richardson.
“His football record is second-to-none and his reputation as a leader is also of the highest order.

“Here he will have the opportunity to work with some of the best senior and up-and-coming talent in the game, which from our discussions over the past few weeks I know he is excited about.
“He will also have the opportunity to work as a head coach with a strong coaching, football and administration staff around him that are all pushing in the one direction, The Rabbitoh Way.”

Bennett’s signing means four clubs will have new coaches, potentially before the preseason officially starts. The Broncos are waiting only on an official signature from Seibold before he is officially announced as their next long-term coach, while Michael Maguire is poised to join Wests Tigers on a three-year, $2.5 million deal.

The Tigers much first sort out whether they will release Ivan Cleary from the last two years of his contract to allow him to return to Penrith. Cleary has already signed with the Panthers from 2021-23 and will be allowed to leave early if an amicable arrangement is reached between the parties.

It may be the last time the game witnesses such rapid change in the coaching ranks. The NRL will investigate the possibility of putting restrictions on when contracted coaches can be approached, with the issue to be discussed at the next meeting of club chief executives.