Selections based on a good track at Royal Randwick.

4. Stardome has always looked as though he’d excel when the distances increased and he had everything to suit when beating a promising type at Canterbury third-up. He just needs a bit of luck getting into a good spot early and he should be very strong at the finish, as he was last time. Handy stayer in the making and hard to beat again.

Dangers: 2. Orcein may not have appreciated racing so handy in a small field but that’s hardly an excuse for his close third on the Kensington track last week. He hit the line ridden quietly before that so is capable of bouncing back. 3. Mangione is back 100m after his fast finishing win at Canterbury at his third start. The form around him is mixed but hard not to be impressed by him last time. Definite chance. 5. Jarhead had no luck at all two starts back but that was taken out of the equation when he led and proved far too strong over the mile at Wyong. Won’t have to lead here and the trip doesn’t appear to be an issue. No surprise to see him run well.

How to play it: Stardome WIN. 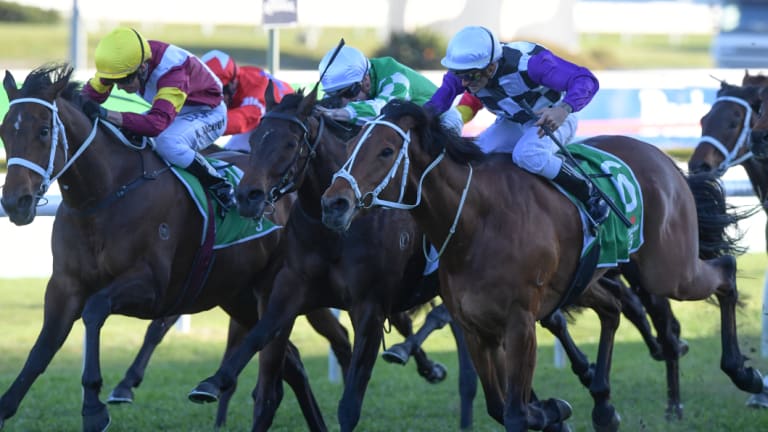 There are nine races at Royal Randwick on Tuesday.Credit:AAP

1. Napoleon Solo only has to run up to his second at Warwick Farm a couple of weeks ago, behind Adana, to take this one out. He had good support and hit the lead in the straight only to be run down late with a big gap to third. The winner ran well in Group company last weekend and bad luck would appear his main threat.

Dangers : 4. Aurman Zou has been handy in two starts to date. He made some ground without threatening in the same race as Napoleon Solo and the only variable that gives him a chance of turning the tables is the good track which neither horse has seen as yet. 7. Stealth Sniper may get an easy lead here and he gave a good sight first-up at Wyong from the front. If left alone he could give them a fright. 5. Flying Pierro is an interesting runner. He’s been gelded this preparation and comes through a synthetic trial so not too sure how he’s going. Watch for a lead from the market as there’s less depth here than what he’s raced so far.

If you’ve been on 2. Canyonero at his last few starts when a short priced favourite he’s worth another look at good each-way odds here. In those three runs he had every chance in the first, went far too hard in front in the second and didn’t get around Wyong all that well first-up in his latest attempt. Bigger track, good ground and he only has to put it together to go close.

Dangers: 4. Nordicus is very well bred but did nothing at all on debut at Canterbury back in July when a drifter in betting. He’s been a barrier trial champion so far but from barrier one he’ll have every chance to show what he’s made of. 12. Heloise is a full sister to Sarajevo on debut and she worked home nicely late in her trial at Warwick Farm recently. You always have to respect the Godolphin debutants when they trial so well and she’s no exception. 9. Zouologist is another big watch on debut. Half-brother to Charlayne and Black On Gold but being by Zoustar will probably be a sprinter-miler. Not asked for anything at his only public trial on the synthetic and if there’s any support around he could surprise.

How to play it: Canyonero E/W.

4. Shangani Patrol is entitled to start a short priced favourite on what he’s done in two city starts since a dominant Canberra win. Cut down late at the Farm a couple of weeks ago but back onto a good track suits and while up in weight he’s down both in class and depth. Can lead or sit handy, either way he’ll take stopping if he holds his form.

Dangers: 3. Plagiarist appears the only serious danger on form. He is on trial at 2400m but he’s been sticking on pretty well around the 1900m mark at his last couple, sure to get a nice soft run and has every chance to be in the finish. 9. Jagger ran fourth, though safely held, in the same race as Shangani Patrol. Outstayed them over 2800m prior to that at Goulburn and in a race with not a whole lot of depth he could get into the placings this time. 1. The Bandit has been disappointing since a handy enough first-up effort. He likes a good track and if he is going to find any semblance of form he has the chance here.

1. Bringagem is a likely improver on a fair first-up effort at good each-way odds. Back in grade, onto a good track and drawn to either lead or be right on their hammer early. Improved with racing last time in to win twice when he got to a mile. If he’s not one run short he can win but expect him to run well either way.

Dangers: 3. Laussel won first-up at the provincials over this trip last time in then progressed to some handy city company during the winter. Trial didn’t tell us much but she has a nice gate and a claim in her favour and should be competitive. 5. Travancore is one of those horses that can knock you out under the right circumstances. Three starts back he ran second to Kaonic and that sort of effort would see him go close. Tends to get back and will be running on. Throw him into the trifectas at least. 9. Campari was far too good first-up then went around favourite at Warwick Farm in this sort of class and only battled into fourth after having her chance. She’ll be a much more appealing price this time around and is entitled to another chance.

How to play it: Bringagem E/W.

1. Tactical Advantage won’t know himself back in this company after a super effort in the Sydney Stakes on Everest Day where he was a $5 chance and just didn’t sprint like he can on the heavy track but was good enough to run fourth. G1 winner Clearly Innocent just nailed him for third. A few weeks between runs ideal. Far too good in this company prior and back to 1100m suits.

Dangers: 7. Isaurian was scratched from Saturday and creates a bit of interest here. Two runs back in Melbourne have been excellent and he was Listed placed earlier this year. Tricky gate with speed inside him but has to be respected. 5. Marsupial hit the lead a long way out and was just found wanting in the last 50m or so running third here a couple of weeks back. Dry track is a plus as is the 100m less in trip. Capable of featuring. 2. Boss Lane wasn’t far from Tactical Advantage in the Sydney Stakes and he’s much better on top of the ground. That said he hasn’t won for a while. Very much a Randwick horse who regularly gives cheek in Group company so can’t be overlooked.

13. Pembroke Castle is a very good chance to break through after a costly defeat when we last saw him about five weeks ago. No luck at all and should have won first-up then finished hard late but didn’t look too happy on a shifty surface caused by rain through the day at Rosehill. He’s now a gelding and drawn nicely. Go close.

Dangers: 4. Deity won impressively two starts back at Warwick Farm then out to 1300m and was very one paced after racing handy on the Kensington track. Inclined to give her another chance here as that latest effort is out of character. 5. Let’s Party Marty was solid in the market first-up for the new stable and he ran on well alongside the winner but just couldn’t match him late. Senior rider on, extra 100m and drawn nicely. He’s a likely improver and a good chance. 6. Southern Lad got the best rails run you’ll see when he came from last to win when resuming at Wyong a month ago. He’s very lightly raced and shows promise, he’ll need the race run to suit from a tricky gate but rather include him than leave him out.

Could be a decent tempo here and that would suit 5. Nai’a who ran on well late on the Kensington track alongside a subsequent Saturday winner. She may want 1400m or so but the bigger track will suit and she won’t have to do any work from an inside gate. Good each-way chance in a tricky race.

Dangers: 6. Perfect Pitch has been freshened up since failing in stronger company during the Newcastle carnival in September. Nice trial against the likes of Lanciato and Kaepernick and on her best form she’s a genuine contender. 7. Ballet Baby isn’t a noted first-up performer but found the line well along the fence at Warwick Farm to run second at 1200m. Only win at this trip and if that first-up effort is any sign she might have come back better and could go on with it. 4. Vinnie Power led all the way to beat Sexy Eyes and Nai’a on the Kensington track continuing her very good form at this distance. Whether she has it as easy this time remains to be seen but winning form is good form.

He’s a bit inconsistent but 5. Amanito may be worth another chance in a very tough end to the day. Brilliant winning three starts back then very plain as favourite, both on the Kensington track. Then struck a wet track and ran on without threatening a couple of weeks ago. He’d appreciate a truly run race and if he gets one then he’s capable of jumping out of the ground. Each-way, though.

Dangers: 12. Watchdog is probably the percentage horse here, he’ll land somewhere on the speed as he did when third at Warwick Farm over 1400m. Untried at the mile but drawn to get a cheap run and should run well. 18. Tunero is fitter for one run back at Hawkesbury where he was strong late. Gets out to a mile on a bigger track, down 5kg and it wouldn’t shock to see him in the placings at least. 16. Kaapfever made a strong late burst to nab 12. Nacho Libre in the last couple of strides at Warwick Farm a couple of weeks ago. The former will get back and run on again while the latter will be on the speed and can give another good sight.

How to play it: Amanito E/W; Save Watchdog E/W.