With fine weather predicted, the track should improve to around a good 4  and, with the rail true, expect the pattern to be even with on-pace dominating early.

A low grade blink-and-you’ll-miss-it scamper to kick things off with most of the trial form very ordinary. Looks a snack for Mudgee mare 5. Sent From Above, who has been placed twice from three short-course starts and comes back from a much stronger Newcastle maiden. Should park right behind the speed and sweep home late.  8. Zamali was okay on debut at Gilgandra after winning a Dubbo trial and just needs some luck from the wide gate to be in the finish, while 6. Haralben will be well prepared for his debut.
How to play it: Sent From Above WIN 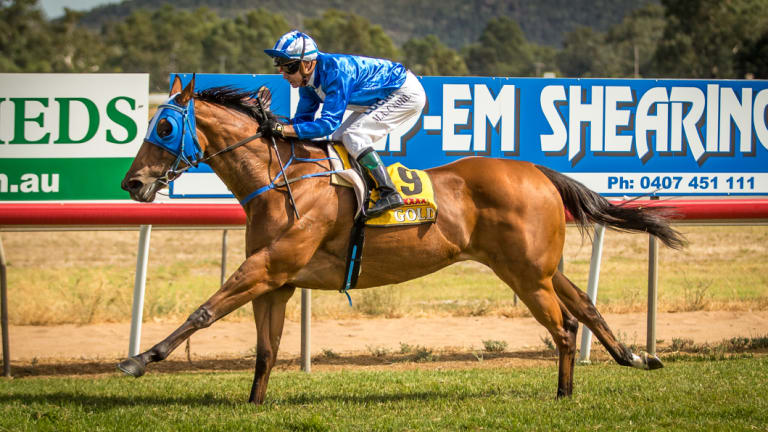 Boots and all: Racing returns the central west at Wellington today.

Wide open race, but 12. Charmed Princess is well placed for her debut after winning a Gosford trial in sharp fashion and has a leading country rider on board. 2. Bel Twista has improved each run in his first prep and will be better off back on top of the ground from a good gate, while both 4. Trojan and 5. Allaru are consistent enough sprinters in this grade and have the necessary gate speed to off-set wide draws. 1. Brave King has also shown gradual improvement across his first three career runs, hails from a good country stable and is a mile over the odds.
How to play it: Charmed Princess WIN

RACE 3: CLASS 1 Hcp (1400m)
Another open affair with many chances and tactical speed will be crucial. Two runners shade the rest. Former Victorian 1. The Rouseabout won first-up at Warren in July for his new Narromine trainer and then hit the line nicely from well off the speed last start. Races best when runs are spaced and leading hoop Greg Ryan keeps the ride. He should be battling it out with Dubbo-based 5. Silk Topper, who broke through at his ninth career start at Mudgee last Sunday and can go right on with the job here in a suitable race.  4. Single Intent comes back from stronger benchmark races at Muswellbrook and Newcastle where he was close-up both times. 7. The Iceman is no star  but won his maiden in emphatic style at Coonamble two runs back and again was strong to the line as an easing favourite last start. A nice weight drop and good barrier insists he’ll be in the finish.
How to play it: Box 1-4-5-7 in TRI

A few of these look weighted out of the contest and all the more reason I want to be on Dubbo-trained 8. Eagles Dare at the value, despite an unflattering record of just two wins and 15 minors from 32 starts! But after running a solid third first-up over an unsuitable trip, the step up to 1400m looks ideal. Was competitiive in some stronger country mile races in the autumn and will get a nice position here midfield off the fence.  Plenty that could charge into the finish, including 7. Outer Space, who followed up an even run in the Collie Cup at Gilgandra with a nice closing effort in a Dubbo class 2 on Heavy ground so looks well place off that effort. And the winner of that race 9. Raised To Duel is very consistent without winning often, but is suited again over her pet trip. Locally trained 5. Smart Attire is also well placed here and should be in the finish.
How to play it:   Eagles Dare E/Way

A dedicated bunch of try-hards here who rarely win, so don’t be surprised if you can throw a tea-towel over half the field on the line. But this looms as the race  for Dubbo-trained 9. Handful Of Aces can return to the winner’s stall. Has found the line really nicely in modest BM50s last two starts, and over the slightly longer trip, will settle back doing no work from an inside gate and be saved for one final surge. The trick will be getting away from the fence at the 600m mark.
Any number of dangers for sure, and I’m almost out of ideas how 3. Not For Export can win another race. A natural off-speed galloper, they’ve tried riding him forward, midfield, in front, with cover, without, and still his third career win eludes, but 17 placings from 45 starts suggests he’ll be running on again. Wyong-based 1. Scatter Blast has superior form than most and is capable of winning this  but has to carry a big weight from a wide gate.
How to play it:  Handful Of Aces E/Way and Quinella with Scatter Blast

Don’t hold back here on Randwick-trained 8. With Purpose, who resumes in an ideal country sprint after two solid city trials. Broke her maiden second start at Goulburn and showed enough in the autumn to suggest she’s headed for much better races. Should tuck in behind just off the speed and launch over the top late. Dubbo-trained 6. Drummed Out is a consistent hard finisher with a decent record, although from the wide alley may find this a little short, while I liked the first-up run of 7. Eyesaw, who is a winner on this track and gets a 1.5kg claim.
How to play it:   With Purpose WIN

Another short-course dash to book-end the meeting and Tamworth-trained Olifants can go on with the job after breaking his maiden first-up at Narromine nearly a month back. Kept fresh for this and should get a gun run behind the speed for a strong rider/trainer combination. Lightly raced Mudgee mare 9. Ennazus is the big danger! Put two sharp wins together back in the middle of the year  and gets significant weight relief from her last-start failure as an easing favourite. 1. Yeas And Nays carried a big weight to win last start at Parkes on a firm track. Should find a trailing position from a middle gate and be in the finish.
How to play it:   Olifans   WIN and Quinella with Ennazus

For more information, head to www.racingnsw.com.au