With showers forecast, expect the early Good 4 rating to slide into Soft range, but with the Rail out a hefty 10m, on-pace should still dominate before a gradual flattening out as the day wears on.

Staying races in small fields where tactics and a lack of speed can be trapdoors, but the locally-trained 4YO 4-Iron Duke has the most progression and carried the same weight to break his Maiden. The rest barely have more than a couple of wins between them and should just be battling for the minor money, although 1-Annie Saturday is clear second best having improved each time’s she’s gone up in trip. 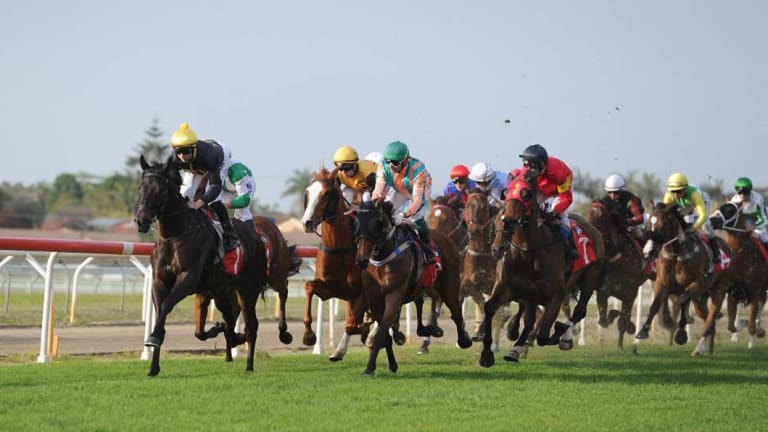 Newcastle’s eight-race card could be impacted by showers.

Tricky and fascinating little scamper here that should be dominated by those on debut and on-speed. The Snowden-trained 10-Starry – bred to get through soft ground – was close-up in a Randwick trial three weeks back run in good time. She looks far better served here after two starts in smart company in the Autumn, while stablemate 9-Rosadiblu was also held together nicely in a shorter trial. Big watch on the locally-trained debutant 6-Andiamo Fica as well as Wyong-based flyer 4-Sheeran, who bolted in a Gosford trial four weeks back.

Open race but the 4YO gelding 1-Given Time looks suited at the mile after two decent runs back from a spell, although the handicapper hasn’t missed him with 59kg. It’s hard to line many of these up, including the Randwick-based Japanese-bred 4YO mare 3-Wild Impact, who has had a stack of trials with mixed results, while the Wyong-trained 3YO 4-Holy Reign will need some luck from a wide gate, but is improving all the time into his fourth career start.

Despite the wide gate, confident two runners will fight this out. Smart 5YO 2-Danzie looks well placed, despite the wide draw, three weeks after resuming with a close second at Gosford and stepping up to 1400m. Coming out of that same race, Wyong-trained 1-Spring Charlie is also better suited at this trip and should get a lovely trailing position from the good draw. The 3YO 8-Showminder has shown a liking for Soft ground and won his last two at Bathurst, and with no weight is the best of the knock-out hopes.

A competitive contest, although with 7-Sangita scratched after returning at Rosehill on Saturday, 2-Power Command, who hit the line nicely in a decent BM 72 at Canterbury after a long spell, can go right on with it here second-up in a weaker race. Just needs early cover and will be very strong to the line. Doubt there are too many dangers, but 9-Bryan's Babe is going well and is a major player in Exotics, while 4-Ferniehurst has early speed and will give a good sight third-up.

Really like the So You Think 3YO filly 8-Nakeeta Jane on debut here. From an emerging stable, she was very strong in a recent Rosehill trial in good time and like the fact she’s over a bit of ground first time around. The 4YO mare 3-Feather flew home from well back on debut at Bathurst to just miss for the strong Snowden yard and should be suited on the long straight here, although the fence draw is a query.

Attack: Back 8-Nakeeta Jane to win; quinella with 3-Feather.

Strong-looking Maiden for the boys, but clear on top for me is the smart and big-striding Sebring gelding 2-Primitivo, who normally comes to hand pretty quickly. Produced an enormous run from the back of the field in the Listed Canberra Guineas in March and was then competitive in both the Group 2 Tulloch Stakes and Group 3 Packer Plate over 2000m. Lovely closing trial at Rosehill two weeks back after missing the start and stable has placed him well first-up on a big open track. If there is a danger, it might be the talented 3YO 13-Exceltic, who has produced two very strong efforts in black-type company and just needs some cover to be in the finish. Good race.

Wide open race for the boys to finish. Consistent 4YO Newcastle gelding 3-Jack’s Bar will come across and probably sit outside the lead and will be hard to go past third run back from a spell – a bit of rain will also help. There are any number of challenges including 1-Masterati, who lumps a big weight from a wide gate, but that’s off-set with a big drop in grade from a city BM 82. The 7YO 6-Tabrobane and the Godolphin 3YO 9-Coach, who broke his Maiden on this track nearly three weeks ago, can both figure in the finish.