Track is a good 3 for cup day on a true rail, so should play fairly even

Tricky maiden to start. Hawkesbury filly 11. Rose Of War disappointed at Moruya, but still worked home okay from a mile back. Should position a little closer here and improves back on top of the ground. 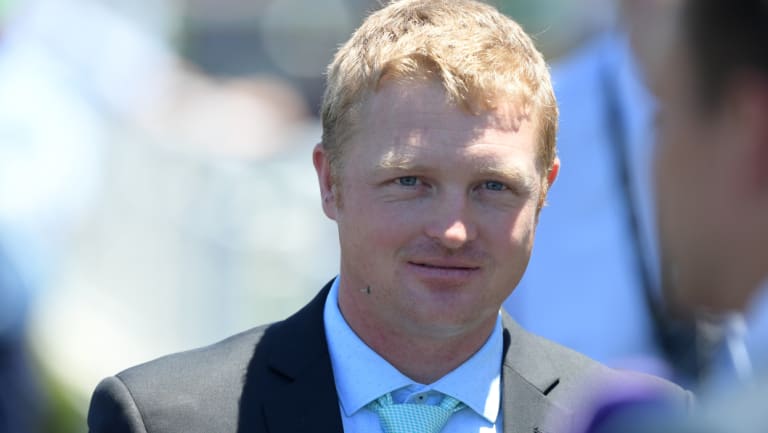 One to watch: Trainer Cameron Crockett has a strong hand in race 3 at Cowra today.Credit:AAP

Another Hawkesbury runner 4. Scarpa doesn't want it any longer, but form is more consistent than others and again draws to park right on the speed. Big watch on Mudgee-trained 1. Christo, who has trialled okay but has to carry a big weight on debut. Gulgong mare 8. See For Yourself has had plenty of chances but still finding the line  and extra trips suits.   Warwick Farm mare 6. Cloudless Sky is screaming for a longer trip and can finish hard in 17th career start.
How to play it: Rose Of War each-way and box first four 1-4-6-8-11.

A short-course battle of tactics at set weights. Bathurst-trained 2. Alcatran is first-up for more than three months; but on debut last prep wasn't beaten far in a stronger maiden at Gosford when backed in from $7.00. Did win his maiden third run, and stable generally brings them to hand quickly. Rider claims 1.5kg.

Dangers: Gulgong-trained 5. Moon Over Menah finished hard to win two back at Gilgandra before over-run at Wellington when unwanted in the betting. Close watch on Orange-trained 7. Yokai who trialled in town, while former Victorian and now Goulburn filly 8. Arithmetic ran a nice race resuming at Orange, and should improve again.
How to play it: Alcatran to win.

Very keen on Nyngan filly 3. Miss Lon, who resumed with a fast-finishing second at Gilgrandra when heavily backed and from a nice draw here should progress strongly into second-up run.

Dangers: Local gelding 2. Valarian comes out of that same Gilgandra maiden when over-run late as an easing favourite  and is again drawn to be right in the finish, while Canberra 4YO 1. None So Bright has been solid behind the place-getters in his first two runs this prep, and the extra journey suits. Big watch on Canberra filly 4. Fusca who hit the line hard at Albury and then went back to the trials at home. Looks to have fair share of ability from an emerging stable. Gulgong-trained 5. Kenneth is also building towards a win and should be included in wider exotics.
How to play it: Miss Lon to win and quinella 2 and 3.

Rare to see a race of this benchmark over such a short trip  but augers well for Goulburn speedster 1. Stone Cold, despite lumping a huge weight. Good fresh and ran three straight seconds in stronger company last prep. Draws to sit right behind the speed and pounce in the straight.

Dangers: Orange 5YO 3. Fine Hero looks a big threat after a brave run in a stronger Randwick Hwy when backed at a big price before finishing hard into a place in the Gilgandra Town Plate. Up sharply in weight, but looks ready to win. Another Goulburn visitor 2. Newtown Is Coming improved significantly to charge home under a big weight at the Sapphire Coast, but this is stronger.

How to play it: Stone Cold to win and quinella 1 and 3.

Tough and open, but one trainer is breathing all over the race! Mudgee 4YO 7. The Warlord looks beautifully placed for Cameron Crockett after being a near good thing beaten when held up badly at Orange over the mile a month back. Was a strong winner second-up on Mudgee Cup day under a big weight  and draws to park right behind the speed.

Dangers: Big fan of stablemate 3. Meraki Miss who stepped up sharply in trip in a BM 74 at Orange, sat well off the speed and finished beautifully to score a deserved win. Weighted to her best, but is a versatile mare, loves firm ground and can again finish hard from midfield. The third of the Crockett runners 1. Kingsbridge offers plenty in this grade, despite first-up for nine months. Has had two trials and normally reacts early in the prep. Another first-up runner Narromine-trained 4. Get To The Chopper also normally fires early in the prep and is the best of the rest.

Last start Gilgandra Town Plate winner 3. Sugar Dance is the one to beat. The Gulgong-traiend 5YO has high class form back through superior country grades, including a dominant win at Orange three back, and beaten five lengths behind the smart Tristan de Angel in a Rosehill Highway back in the spring when jumping a $4.40 favourite.

Dangers: Dubbo-trained and consistent 4. Kenny Succeed wasn't far off Sugar Dance last run and drops in weight, while Wagga visitor 7. Fermanagh Lad was strong from the front winning the Moruya Town Plate and draws to get a lovely run again. Local veteran 1. Zarhron is unbeaten from four runs this track  and draws to be in the finish again. Gosford trained 10. Bright Future has been consistent of late and drops in weight here from the fence draw.
How to play it: Sugar Dance to win and box first four 3/1-4-7-10.

Competitive and open feature. Loved the win of local 6YO 7. Welcome Art at Orange finishing hard after doing some work under 60kg to beat a good BM 66 field. That came after also attacking the line well behind Meraki Miss. Hard fit, well in at the weights and at best on top of the ground. Looks way over the odds.

Dangers: From a good trailing gate and with a weight turnaround, Dubbo-trained and sparingly raced 5. Cowboys Karma can turn the tables on Mudgee mare 3. MacKellar's Love from the Gilgandra Cup where the former did all the hard work in front, although the latter boasts consistent form around this grade since early spring. Doubt the winner will come outside this trio, although if you are going wider, include Canberra-trained 8. Balansa who gets to a more suitable trip fourth up and is in well at the weights.
How to play it: Welcome Art each-way and box exacta 3-5-7.

Open affair to finish, but keen on Dubbo-trained 5. Sons Of Bourke resuming. Normally comes to hand quickly in the prep, and has been given two trials, the latest sat wide on the speed but still hit the line nicely.

Dangers: Looks a suitable race for Canberra mare 13. Chasing Waterfalls who won this track two back before working to the line okay at home. Draws a good gate and down in weight. Another Canberra mare 14. Ticked Off has been consistently just behind the place-getters at home and suited by the extra trip, while Queanbeyan visitor 4. Zariz No Other was okay at Moruya after winning a slightly weaker race at Canberra and draws to get a nice trail off the speed.
How to play it: Sons Of Bourke each-way.