Selections based on a Good to Soft track.

Happy to be with the market and 4. Signore Fox who started favourite in a Group 3 race between cleaning up a couple of provincial events. The drop to 1200m was against him at Newcastle last time but he was able to get there in the last few strides. Small field and extra 100m are in his favour and he’s the one they have to beat.

Dangers: 2. My Song enjoyed a perfect run and was able to peel out and sprint away in the last 200m to win a similar race over this course recently. Can be inconsistent but is the logical danger. 1. Delfuego finished off his race okay fresh at Newcastle but ultimately found 1200m a bit too short. This trip is still short of his best but the small field will bring him into contention. 3. My Zebrinka hit the lead in the shadows only to be swamped by Second Island when resuming at Gosford a few weeks ago. Jumps 300m quickly and unproven at the trip but again it wouldn’t surprise to see him go close.

How to play it: Signore Fox WIN. 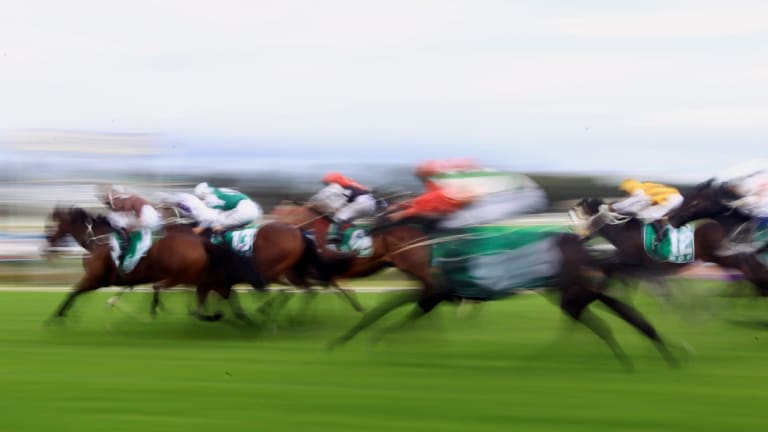 There are eight races on the card today at Hawkesbury.

As far as wining chances go the market again seems to have it right. Leaning to 4. Deitra who hasn’t raced since a pretty handy debut at Newcastle back in May where she worked home well in the last 100m into third. Plenty to like about her trial at Wyong recently, again cruising home late under no pressure. Expect her to run well.

Dangers: 8. Ulusaba gave a good sight at his first start back in January then failed in a stronger city maiden. Gelded and he’s been thereabouts in two trials. He will probably lead and is well worth keeping safe. 1. Devil’s Luck was unwanted in betting first-up at Newcastle but he kept coming and stuck his head out to run third. His best performances to date have suggested he wants a bit more ground than this but fitter and is the other winning chance. 7. Mr Boomjangles failed badly when in the market fresh at Goulburn and went back to the trials where he seemed to right the ship a bit. Any give in the ground would be in his favour, given a heavy track placing here back in June, but he still needs to improve.

How to play it: Deitra WIN.

1. Missybeel wasn’t a factor first-up at Canterbury but expect her to play a much larger role with the run under her belt and the extra distance. She generally races up on the pace but was burnt off fresh. In this field she can take control and on her best efforts she’s tough to beat. A little short in the market, though.

Dangers: 3. Alnaas also comes off a failure in midweek city company but overlook that in the context of this race. She hit the line strongly in her previous two starts and given her only win to date is over a mile she’s entitled to another chance. 2. Beauty Kanas was a significant drifter in the betting first-up but she raced handy and boxed on quite well, though clearly had enough about 200m out. Fitter for the run and if she can improve from it she’s a winning chance. 4. Big Legged Woman battled in a couple of provincial Class 2s before dropping to country grade and she ran an improved third at Muswellbrook. Will probably find it hard to win this but another placing isn’t out of the question.

Wide open race, and going with the horse with probably the most upside in 2. Avalene who has only had two starts to date. She started big odds at her debut and finished hard late to run a nice second at Gunnedah then battled on fairly at Tuncurry, probably looking for more ground. Gets that here and in a winnable race she’s a good each-way chance.

Dangers: 3. Decapitor has found some consistency this time in with a string of second placings, the latest at Cessnock where he started favourite and was a bit one paced. He’ll be up there somewhere and can feature in the finish. 6. Costello was only getting warm as the race was over when he resumed at Kembla Grange and he will definitely appreciate more ground. That said he has been safely held in all three starts so he needs to lift a bit to be a winning chance. 7. Lutreola contested the same race as Decapitor at Cessnock and finished not far from him. That was an improved effort but being a 17 start maiden he’s probably more a place chance.

How to play it: Avalene E/W

Taking a stab on the unraced 3. Double The Offer who has found a maiden that is up for grabs. He didn’t wear blinkers in his first trial then they were applied in the second at Hawkesbury a few weeks ago. He took a bit of winding up but he looked to be travelling well late. Might be worth something small each-way in a wide open race.

Dangers: 5. Another Shadow staged quite a form reversal to be narrowly beaten here second-up at 1100m. He hit the front and was grabbed late on that occasion and if he can run up to that effort with an extra 200m he’s hard to beat. 7. Chamfer was a beaten favourite first-up over this course, he was in front with 100m to run but couldn’t hold out the closers. Didn’t fire at Canterbury but is better placed back in grade and can feature in the finish. 11. The Sprooker was thereabouts the whole way when third in the same race as Another Shadow last start. Finds it hard to win them but hasn’t been far away of late so is worth including in the chances.

There hasn’t been too much wrong with what 4. Destiny’s Reward has been doing in two runs in NSW. Freshened up since he attacked the line very hard late into fourth over 1000m at Kembla and he looked comfortable leading a trial at Kembla a couple of weeks back. Won’t lead here you’d think but with a smooth run he’s an each-way chance.

Dangers: 1. Sparkly Star has been around the mark in his last couple of starts in similar company and he was only narrowly beaten over this course three weeks back. Had every chance there and again lumps a big weight but races handy and should be in the finish. 6. Prince Planet failed on a soft track at Mudgee but was back in form with a game third in a Highway at Randwick. While never a winning chance there he held his ground and is capable of being a factor here. 3. Rhyming Puppet contested the same Highway at what was his first run since April and he punctured after settling on the speed. Showed ability winning three straight in Canberra last prep so is entitled to another chance.

How to play it: Destiny’s Reward E/W.

9. Bandol takes on older horses but she’s shown promise in her two starts, including a win at this track on debut, and she was game when run down after leading at Randwick three weeks ago. Expect she will get control up front here and with more upside than most of her rivals she’s clearly the one to get past.

Dangers: 6. Iona Nicconi is a little underrated and resumes after enjoying an excellent prep through the late summer and autumn winning three of her five starts. Beaten by a speedy type in a Wellington trial recently and while she’s more effective at 1200m-1400m she can run well fresh. 8. Tapavino was consistent through her last prep until she failed at Nowra before a break. Forgive that, she runs well fresh and has two trials under her belt. An each-way chance at least. 2. Phoebe’s Lass also tends to run nice races first-up and she’s right down in grade on what she was contesting earlier this year. Well worth giving some thought to her.

3. Chief Kidder is normally a front-runner but he reacted to being ridden off the pace over a mile at this track last start and was finishing strongly into a close second. He may resume a more forward role back to 1800m and on his city form in August he has a good chance to break through.

Dangers: 4. Cinderconi appears the logical danger. She’s lightly raced and has been competitive with a couple of smart types in her recent placings. Less depth in this race and he’d only have to hold form to be in the finish. 7. High Rush has really hit her straps with a bit of distance at his last couple and was dominant at Muswellbrook from on the speed a couple of weeks back. Wouldn’t surprise to see her measure up. 5. Hold All Tickets is another on pacer who has been competitive of late over similar trips. Record says she might find it hard to win but is one you have to include in trifectas.