A scamper to start and that suits local mare and debutante 2. La Loi who has plenty of natural gate speed and was a dominant open trial winner under a good hold last month.
Dangers: Newcastle filly 13. Schooner Or Later was pushed out in a recent narrow trial win and is drawn well while Scone filly 14. Starletto improved at big odds third run in and should be in the finish. Cessnock-trained 3. Ortega Lane should be included in wider exotics.
How to play it: Back La Loi to win and box 2-13-14 in exacta. 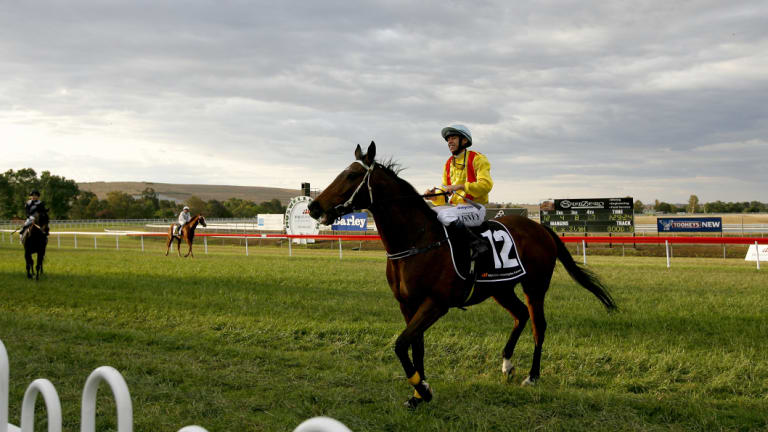 Tricky one: Racing is back at Muswellbrook on Tuesday.Credit:Fairfax Media

Debutant Wyong filly 8. Kohinoor Road trialled twice at Rosehill in the autumn before being given time to mature. Blew out the cobwebs in a strong Newcastle trial effort sitting wide all the way and looks ready to go.
Dangers: Cessnock mare 2. Got The Giggles looked good in a recent trial win and will race forward from the good draw; while another mare 3. She's Strong is bred for speed and was also impressive on that same Newcastle trial day. Of the raced brigade, 10. Macal from a strong Newcastle yard looks the best of them. Hit the line nicely at Taree a month back before an easy trial winner at Gosford. Nice draw to sit midfield and charge home.
How to play it: Back Kohinoor Road to win and quinella with Got The Giggles.

Considering most of these haven't come close to breaking through, three-year-old Newcastle-trained filly 12. Tippler who has attacked the line all three runs this prep looks a good thing, and is beautifully placed on the limit weight from a cosy barrier. The one to beat!
Dangers: Doubt there are any, but Scone mare 6. Palais De Louvre has been consistent enough, while 5. Oakfield Romance will appreciate the step up in trip and getting back on firmer going for leading Wyong trainer Kristen Buchanan.
How to play it: Back Tippler to win.

Very open affair, but if Warwick Farm mare 6. Lady Of Kos reproduces her first-up run at Canberra, she'll be hard to hold out. She motored home from midfield to just miss and carries 1.5kg less.
Dangers: Another Warwick Farm visitor 11. Jersey Rose was also strong to the line in that same Canberra maiden two runs back before disappointing at Nowra, but firmer track suits being by All American. Newcastle filly 14. Sassy Charlie finished off nicely at Taree last start when hard in the market and after three close-up runs this prep is ready to win. Big watch too on well-bred Rosehill debutant 8. Ocean Dash who won a recent 1200m trial on heavy ground but has drawn wide.
How to play it: Back Lady Of Kos to win and box 6-8-11-14 in trifecta.

Another open battle, with some of the better fancies drawn wide, but settling on Hawkesbury mare 12. Ellie Beach at big odds despite still being a maiden after 10 starts. Has hit the line nicely from off the speed at Orange and Bathurst this prep and stepping up in trip from a good gate is ideal.
Dangers: Rosehill-trained 1. Cartel chased home the smart Nicco Lad at Newcastle last start and will be suited up in distance, but has a stack of weight. Newcastle visitor 6. Warrumbungle continually finds the line and is building up to a win. Extra trip also suits, but drawn out as is fellow Novocastrian 8. Front View which has been rock solid two runs back and boasts leading rider Andrew Gibbons to steer.
How to play it: Back Ellie Beach E/W and box 1-6-12 in exacta.

Competitive race, but looks right for local 4. Magic Beneteau which charged home to win last start at Dubbo in similar grade. Gets a nice smother draw midfield and will smash the line again.
Dangers: Gosford-trained 3. Yambaah Prince came from well back to win a similar grade first-up at Port Macquarie and normally holds his form early in the prep, but has a tricky wide gate. Resuming Scone galloper 2. Valknut has a tough ask with plenty of weight and a wide draw first-up, but normally comes to hand quickly and this is a race of little depth.
How to play it: Back Magic Benneteau to win.

Keeping up the open trend, although one runner is clear on top. Locally-trained 5. Litt Up finished hard to break his maiden at Tamworth last start beating the promising Nick The Skip, and leading hoop Grant Buckley keeps the ride.
Dangers: Fellow local 7. Big Reg was strong to the line in a decent CL2 at Dubbo. Has been given plenty of time to recover and will be finishing on behind a solid tempo. Big watch on 4. Moobi having his first run for new Tamworth stable and drawn the inside while 8. Such A Hussy resumed in nice style at Armidale and is even better suited here second up over slightly longer trip. Newcastle youngster 11. Shark Alley wouldn't want it any further, but is hard fit after three runs back and will park right on the speed.
How to play it: Back Litt Up to win and box 4-5-7-8 in trifecta.

Feature race and keen on classy Armidale-trained 11. Arugula who looks one of the better weighted runners all day. Found the line nicely last start in a stronger Randwick Highway in heavy ground and drops 3kg to the limit here. Before that was a dominant BM66 winner at home.
Dangers: Newcastle-trained 1. Marathon has plenty of quality and wasn't beaten far under a big weight in the Jungle Juice Cup. Was good in previous start at Warwick Farm and drawn to sit just off the speed and work into the finish. Veteran 4. Pippi's Pride was strong to the line in a BM66 at Tamworth before an upset win in the Denman Cup when specked at a huge price.
How to play it: Back Arugula to win.

Don't be turned off by the wide barrier with well-bred Armidale filly 7. Rock The World. She's won her last two in impressive fashion sitting behind the speed and is still on the rise. Again will come across from a wide draw, but late in the day that might be an advantage.
Dangers: Local mare 1. Sister Joy is the clear threat, especially with rider's 4kg claim to offset the weight. Smart sprinter who has been in and around the money all prep and will sit right on the pace from a good gate. Scone filly 12. In Good Health is much better suited back to this trip after a fair effort over 1400m at Tamworth last start. Has ability and was a dominant winner three back on this track. Include 3. Iamacrumpet who has early speed and returned to break her maiden on this track at just her second career start.
How to play it: Back Rock The World to win and box 1-3-7-12 in trifecta.