Australian off-spinner Nathan Lyon is locked in a three-way battle to defend his crown as the year's leading wicket-taker in Test cricket.

The race looks set to go down to the wire with Lyon, Sri Lankan off-spinner Dilruwan Perera and South African speedster Kagiso Rabada all in action for their respective nations in the period between Christmas and New Year's Eve. 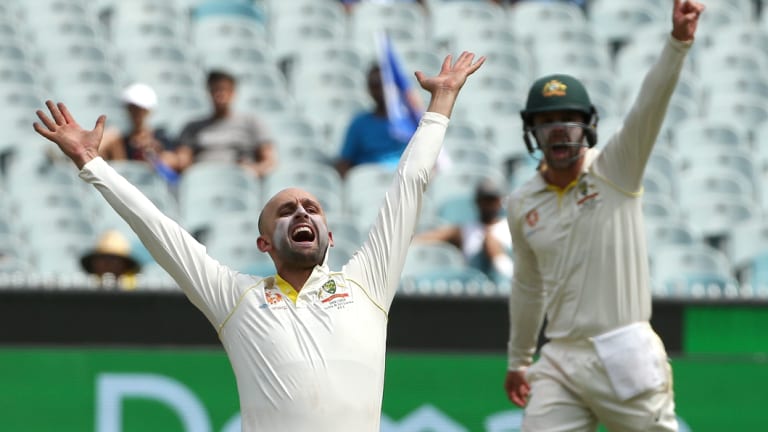 Race to No.1: Nathan Lyon.Credit:AAP

Perera's second-innings dismissal of New Zealand batsman Jeet Raval in Christchurch took his tally to 50 wickets, one clear of Rabada who snared three first-innings wickets against Pakistan on an eventful first day in Centurion.

Third-placed Lyon (48) was empty-handed for Australia as India went to tea at the MCG on Thursday's second day but dismissed Ajinkya Rahane lbw in the final session on day two.

Recent form bodes well for Australia's most prolific off-spinner, whose 16 wickets for the current series is the most of any bowler.

He proved to be the difference for Australia in the second Test in Perth, where he snared eight wickets and earned man of the match honours.

"It does seem like he is getting better," Australian skipper Tim Paine said in Perth.

"I feel like at any stage you can throw him the ball. It doesn't matter at what end, or who is on strike, what time of day it is … he loves it, and he loves getting in the contest, even with the bat at the moment.

"I think his game keeps going to another level. I can feel guys growing in confidence around Nathan and that's what you want from your senior players."