Joe Tapine knows he's walking on thin ice, but the Canberra Raiders second-rower is determined to see out the NRL season without slipping up again.

Tapine returns from a two-game suspension to face the Melbourne Storm in Melbourne on Saturday, with the Green Machine needing to win all six of their remaining games to play finals. 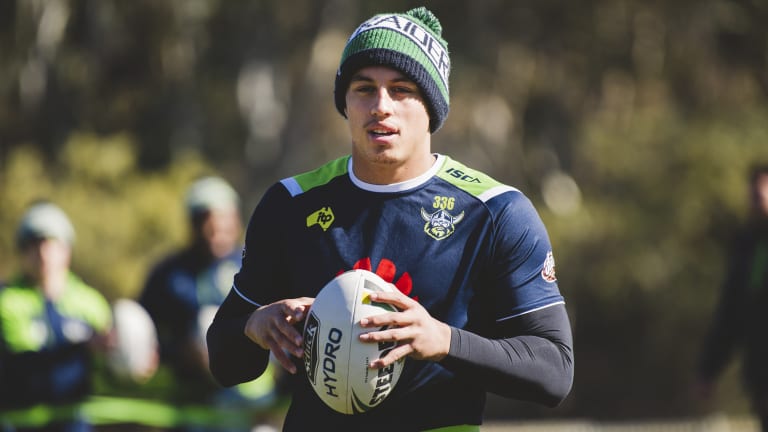 The Kiwi international is a key cog in Canberra's chances of making that happen, especially given the Raiders' poor record in Melbourne where they've lost their last three visits.

It's the second time Tapine's been suspended this season.

The 24-year-old said he's going to be watched even more closely going forward given his track record.

But he's determined to put that aside, while also sticking to his aggressive approach to the game.

He's hated the last two weeks – getting flogged on the training track, while also getting stick from his teammates about having a holiday – and said it was worse than being injured.

"It's hard. You've got to walk on thin ice really. You've got to watch everything you do. It's a hard job now, now that I've got suspended a couple of times they'll be watching me a lot," Tapine said.

"I want to do my job, but not want to be suspended. It's still in the back of your head, but I try not to think about it much. I don't want to miss any more weeks.

"It's the worse thing being on the sidelines, the boys are giving you a bit of stick about getting a couple of weeks off. It's a tough job and I just want to make sure I stay on the field."

He felt they lacked that hard edge in the first half against Cronulla last week, which ultimately proved costly as they trailed by 16 points at half-time before going down 28-24.

Melbourne hasn't been a happy hunting ground for the Raiders – they've won just four of their 20 games down there.

The Storm have won their last seven games to shoot to the top of the NRL ladder.

Paulo said the Canberra forwards had made a pact to be aggressive from kick off.

"Going up against a big pack it's definitely going to be needed and it's something all the forwards are going to have to do, to step up," he said.

"We let ourselves down last week with our poor start to the game.

"We definitely need the two points. Desperation calls for desperate measures. It's going to be a tough one going there.

"It has been one of the toughest road trips for us, but it's one we're looking to overcome and get the two points against them."

The 10th-placed Raiders sit six points outside the top eight and probably need to win their remaining six games to have a chance of playing finals.

Tapine said there was still confidence within the group they could, while Paulo vowed they'd give their all to make it happen.

"We're definitely desperate for a spot in the finals and we're just going to have to do whatever it takes," Paulo said.

"We're in a tough position in order to actually secure a spot. For us, the way we approach it, is just giving everything that we have left and it means leaving no stone unturned.

"We're looking to finish strong and hopefully get a spot there."