It will come as a shock to most TV viewers that the voice of rugby league will be heard just once during the opening weekend of the NRL finals.

Rugby league doyen Ray Warren remains the best in the business but has only been rostered on for the Sydney Roosters-Cronulla clash on Saturday night. 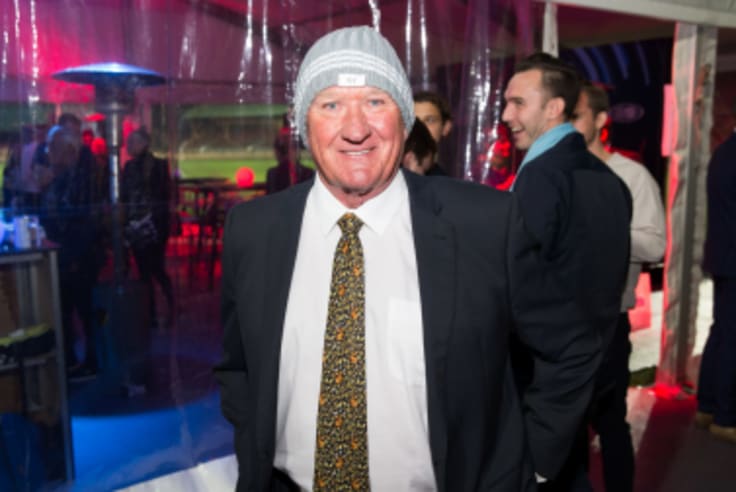 Calling the shots: Ray Warren has been able to be selective with his commitments this season.

Channel Nine will rely on Matt Thompson for the other three matches, including the Friday night blockbuster between premiers Melbourne and South Sydney.

Warren was happy to be spared flying to Melbourne on Friday and then to Brisbane on Sunday   and knows the   network's less-is-more approach with him could actually preserve his career in the box.

Now 75, Warren signed a five-year deal last year with Nine that prevented him from switching to a rival network but also gave him the freedom to call games on a ''casual basis''. He has the luxury of calling games when he wants and how often he wants.

The man known as "Rabs" believes the one game he will call this weekend features the likely premiers.

"It won't surprise me if Cronulla comes out and wins it,'' Warren told Fairfax Media.

"I think they've got a brilliant pack of forwards and a lot of depth as well, when you've got guys like James Segeyaro coming off the bench, and Aaron Woods and Jayson Bukuya. When I'm asked for my opinion, I often look at the bench first, and I'm starting to think the Sharks can do it.''

While Thompson is Nine's rising star, and Fox Sports' trio Warren Smith, Andrew Voss and Brenton Speed are all top quality, none of them are in the same class as Rabs.

Warren said his fear of flying, which forced him to pull out of the LA Olympics in 1984, may have been embellished over the years, but he was happy to pass on flights when possible.

"I called the Origin games in Melbourne and Brisbane this year,'' Warren said.

"Every time I have to fly I spend the week looking at the weather forecast. It gets me in the head.

"I'm driving to Nine as we speak and I'm looking up at the sky, noticing there's cloud but thankfully no wind. I should have been an air-traffic controller. The funny thing is I'm fascinated by a number of things to do with aviation.''

Warren has been pestered countless times about when he will call it quits.

He maintains his biggest fear is ''calling the game one minute too long''.

Warren says the lighter workload at Nine has already prolonged his career. Thompson has done a lot of the heavy lifting.

The huge Sydney representation in the NRL finals will make life easier again. At least one finals game will be on home soil in weeks two and three before the grand final at ANZ stadium, a match Warren has called more than 40 times.