Melbourne Rebels coach Dave Wessels has moved Wallabies back Reece Hodge to five-eighth as his side chases its first Super Rugby finals berth.

Hodge has spent much of the season in his preferred role in the centres but with Jack Debreczeni facing some struggles in the five-eighth role, the versatile Hodge will step into the role for Friday night’s clash with the Tokyo Sunwolves at AAMI Park. 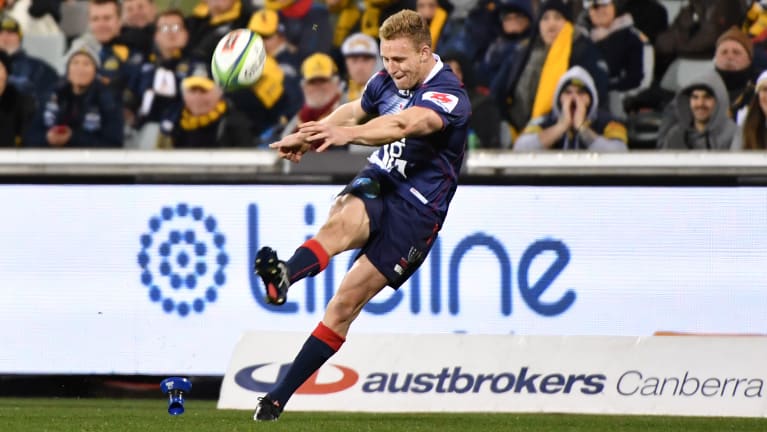 Debreczeni was not named in the 23 with uncapped New Zealand rookie Tayler Adams coming onto the bench as a reserve back.

The Rebels need every win they can get as they chase Australian conference leaders NSW Waratahs.

Full-back Dane Haylett-Petty will also return to the side after he missed the past month due to a bulged disc in his neck.

His steady play and creativity have been lacking from the Rebels, although emerging back Jack Maddocks has performed strongly in the role since moving over from the wing.

Maddocks will move back to the wing to face the Sunwolves while the Rebels have also brought back hooker Jordan Uelese from an ankle injury and he will play off the bench as will Ben Daley and Sefa Naivalu, who also return.

Rookies Pone Fa’amausili and Adams will make their debuts if they are introduced to the game from the bench.

“It’s good to have Dane back in the starting 23 – he’s a real leader in the group and everyone will take confidence from having him around,” Wessels said.

“It should a great game. The Sunwolves played some fantastic attacking rugby to beat the Stormers and Reds in the last two weeks, so we know they’re arriving Melbourne full of confidence.

“Most of all, we’re excited to be returning in front of our home fans at the Stockade [AAMI Park]. It’s a critical game for us, so we’re looking forward to putting on a display that Melbourne people can be proud of.”

The Rebels play the Sunwolves at AAMI Park on Friday at 7.45pm.