Reece Conca will open contract renegotiations with Richmond mid-year, and could again attract interest from his home town of Perth after a strong start to the new campaign.

Conca, 25, had not been a regular selection for the Tigers since 2014 when he played 19 matches. In the past three seasons, he has managed a combined 15 games because of injury and form but a smooth pre-season has helped him feature in the opening four matches this year, heading into the Anzac Eve clash against Melbourne at the MCG. 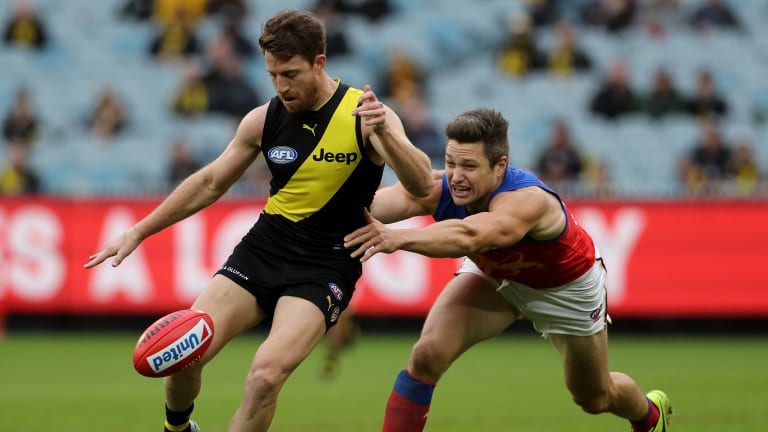 Reece Conca is happy to wait on contract talks.

He has averaged 20 disposals per game, including 24 in the win over Hawthorn and 26 against the Brisbane Lions last week.

Conca, a 90-game veteran, is off contract this season and is an unrestricted free agent, meaning he could walk to the club of his choice regardless of what the Tigers offer.

He, his manager Colin Young and the Tigers agreed over summer to wait the season unfolded before opening negotiations.

"I met with Richmond last week in Melbourne. Both parties are really pleased with the way he is going and we will talk again in the middle of the year," Young said.

Tigers football department chief Neil Balme said Conca's development had been impressive to watch, he was a fine club man and contract negotiations would open later in the year.

"He has been terrific – he hasn't had a lot of luck over the journey," he said.

Conca had an opportunity to head home and join the Fremantle Dockers in 2016 when his previous contract expired but his affiliation with the Tigers and his teammates proved too strong.

He missed selection in last year's grand-final side, having begun the season strongly before a foot injury in round six sidelined him until round 22. Having been told by the coaches what he needed to focus on, he returned even more determined over summer to play a role in the premiership defence.

Coach Damien Hardwick said Conca was a reason why the Tigers had crunched the Hawks through the midfield when he "stood up" in round three, and said after the win over the Lions that his form had been crucial in allowing Dustin Martin to spend more time up forward.

"Probably the emergence of Conca as well, it's starting to pay dividends through there. We also know that because of that depth we can start to push Dustin forward a lot more and that becomes another weapon for us, then all of a sudden they [opponents] have got to change their match-up," Hardwick said after Martin booted a career-high six goals.

Conca was taken with the sixth pick in the 2010 draft and was a regular selection in his first four years before injuries hit. His re-emergence this year has also allowed Jack Graham to play in more of an outside midfielder role.

‘‘He [Conca]had a really good pre-season. He has had a horrible run with injuries over the last two to three years but we are starting to see when he is around the ball, he hunts it well, he uses it well and, defensively, he is very good as well. I am really pleased,’’ Hardwick said.