The AFL was encouraged to get tough on punching on Wednesday as the AFL competition committee debated whether to introduce a red card to the game as part of the annual review of the tribunal and match review panel process.

Although the introduction of a red card is considered unlikely as early as 2019 there is an expectation that the review will lead to stronger measures being introduced to deter players from engaging in low level offences that may escalate into major incidents if unchecked. 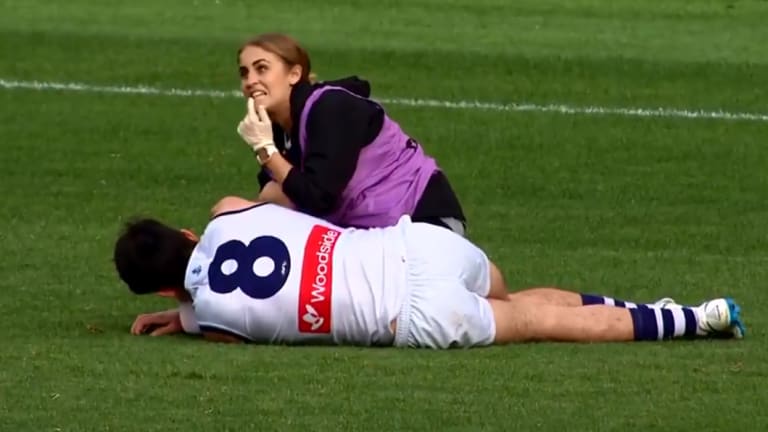 Andrew Brayshaw after being punched by Andrew Gaff.Credit:Fox Footy

Currently players can be penalised via a free kick, a fine or a suspension for punching players but the threshold for what is considered a low level offence is still considered too small despite fines being increased in 2018 with the intent to stamp such offences out.

Fairfax Media understands the committee was divided on when a red card was necessary, with several incidents being shown and debated as to whether they would warrant the offending player being sent off.

Although it's unclear exactly what incidents were shown to the competition committee, the AFL football operations department asked media at a post-season briefing to view incidents such as Tomas Bugg striking Callum Mills, Nathan Brown bumping Adam Saad and Jeremy Cameron flattening Harris Andrews and give feedback as to whether a red card was necessary.

The competition committee also raised practical concerns about how to apply the send off rule, relating to who would make the decision, what technology would be at their disposal and the parameters surrounding such decisions.

However many members of the committee are understood to have expressed the view that if a player is deliberately punched and can take no further part in the game then it is unfair for the offending player to be able to continue in the game as it gives their team an unfair advantage.

Such diversity of views makes the introduction of a red card for 2019 unlikely however the committee was unanimous that the AFL needs to get tough on punching and make sure appropriate penalties are in place to deter players from punching and niggling opponents and the issue is likely to stay on the agenda.

Concerned at seeing unnecessary niggles and off-the-ball bumping increasingly creeping into the game, they encouraged the AFL to send a strong message that such actions are unacceptable.

Despite AFL CEO Gillon McLachlan offering a personal view that a red card was unnecessary, the AFL promised to investigate the possibility of such a system being introduced after the public outcry that followed West Coast midfielder Andrew Gaff's punch on his Fremantle opponent Andrew Brayshaw that led to Gaff been suspended for eight weeks and missing the Eagles' premiership.

In the past 24 hours, the World Rugby CEO Brett Gosper called for more red cards to be given in rugby union for dangerous tackles and the send-off rule has long been a part of Australian football at a local level.