If ever an incoming coach of NSW, losers of the past three and 11 of the past 12 State of Origin series, would benefit from a preview of prospective players against their key opponents, it’s today's match between St George Illawarra and Melbourne.

With selection for the first game only three weeks away and Queensland’s formidable spine on display at Jubilee Oval today, as well as the possibility St George Illawarra could supply five forwards to a revolutionary Blues pack, NSW coach Brad Fittler has been given a rare opportunity to witness who puts his hand up for selection. 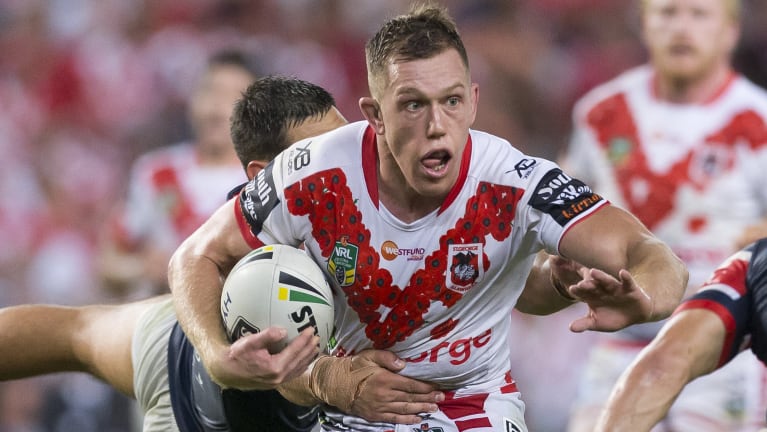 Unfortunately, "Freddy" won’t be at the game.

His commitments for Channel Nine mean he will be at Allianz Stadium for the 4.10pm clash between the Roosters and Sea Eagles.

In an incredible scheduling blunder, the best game of the round – the Dragons (first) against the Storm (fourth at the start of the round) – is at 2pm, the slot usually reserved by TV for the worst game.

Freddy will have to rely on a replay, together with the observations of his trusted advisers. To be fair, in a year where the selection of the Blues will see a major turnover of talent, Fittler won’t rely on just one game. But he won’t see as many intriguing match-ups again.

The Dragons’ Cameron McInnes versus the Storm’s Cameron Smith

Fittler will have three possible hookers in mind, but to watch the NSWfavourite, McInnes, up against the greatest rake of all time is a rare opportunity.

McInnes is running more and the only mystery about his form is why the Rabbitohs let him go. 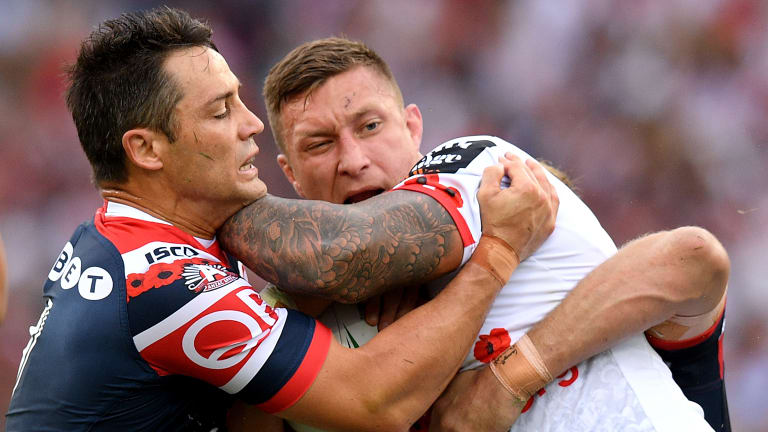 The Dragons’ Tariq Sims versus the Storm’s Felise Kaufusi

The two back-rowers will oppose each other with Sims on the Dragons’ leftand Kaufusi on the Storm’s right. Queensland’s Kaufusi onlyreturned to his best against the Warriors, while Sims has been a star in the Dragons pack this season.

The Dragons’ Jack de Belin versus the Storm’s Dale Finucane

Both want the NSW No.13 jumper. They are different types of players; deBelin offering more variety in attack, although he does run across field toooften. Finucane’s strong defence and high work rate make him a favourite ofhis club coach Craig Bellamy. 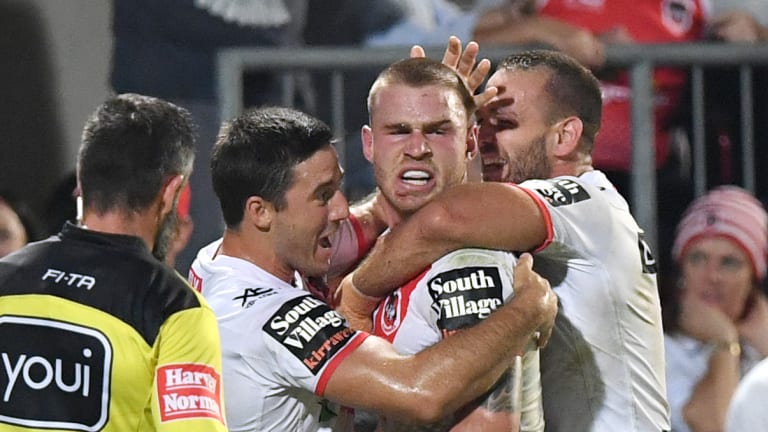 Euan cry: Euan Aitken (centre) is another Dragon in line for NSW selection.

The Dragon’s Euan Aitken versus the Storm’s Curtis Scott

Aitken plays on the right and Scott on the left and they could be the two NSW centres, particularly with the injury to incumbent Josh Dugan. Aitken is more robust, but while his tackling is solid, he does occasionally misread numbers in defence.

Scott is a classic three-quarter, with superb timing and efficiency. He is only 20 and will become a 10-year NSW Origin player. But he is slight of build and Fittler may want heavier bodies on NSW’s left side.

The Dragons’ Ben Hunt versus the Storm’s Cameron Munster

Halfback Hunt plays on the right and five-eighth Munster on the left. Both will be in the Queensland team and are creative in their different ways. Maroons coach Kevin Walters will be interested in who wins the fight.

Hunt has shown a greater commitment to structure this season, but is still capable of a solo, risky act, not necessarily a bad attribute in Origin. Munster has added a short kicking game to his impressive array of skills.

The above pairings are of players directly opposed to each other, while there are others on display who are in serious contention.

Melbourne left winger Josh Addo-Carr has the speed of an Olympic sprinter and the balance of a tightrope walker. However, he is only 86 kilograms and Fittler will want to pair him up with a left centre who is strong and forceful. Queensland are very skilled at keeping teams pinned on their own try line and "the Fox” will need some bulk beside him to escape this territory.

He will not be marking the Dragons’ Nene Macdonald, who also plays on the left and is eligible for Queensland. Macdonald was named as an emerging Maroon last year and Walters has his eye on him after he has discarded some of his lazy habits.

The Storm will also have guaranteed Maroons selections Billy Slater and right centre Will Chambers on display.

Prop Tim Glasby, once he recovers from a broken thumb, is likely to play in remaining Origin matches for Queensland.

Fittler will be focussed on the Dragons pack. Apart from McInnes, Sims and de Belin, he will be watching Tyson Frizell and Paul Vaughan. Frizell is an incumbent Blue and is an automatic selection, while Vaughan was close last year and the Dragons coaches have improved his defence significantly during the past two seasons.  He is very dangerous close to the try line.

The Dragons are expected to be at full strength following their impressive victory over the Roosters on Anzac Day, while Finucane is no guarantee to have recovered from a broken thumb and Scott injured an ankle in the Storm’s Anzac victory.