Conor McGregor sipped whisky and boasted he would need just one round to defeat Khabib Nurmagomedov and reclaim the UFC lightweight title during a typically wild news conference to promote his return to the octagon.

McGregor repeatedly referenced the infamous April incident when he threw a metal dolly through the window of a bus carrying Nurmagomedov and other UFC fighters, leading to his arrest and eventual guilty plea. 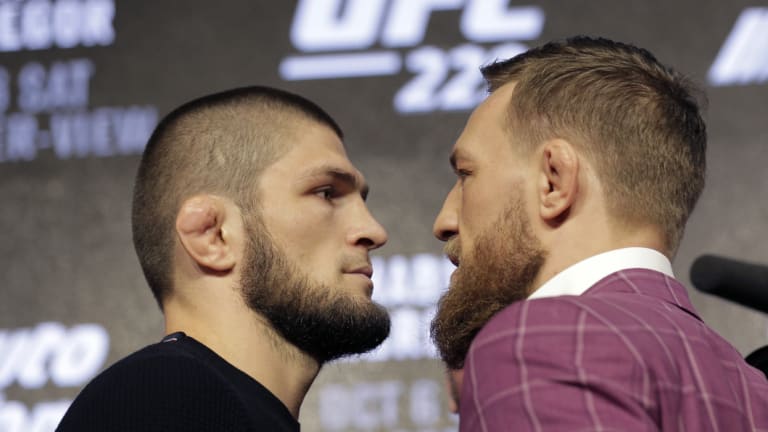 Showtime: Conor McGregor (right) and Khabib Nurmagomedov pose ahead of the Irishman’s return to the octagon.

The 30-year-old Irishman told reporters in New York that he was glad he had been unable to coax the Russian off the bus that day.

"I just thank the lord Jesus Christ that man did not … step foot off that bus," McGregor said, pointing to Nurmagomedov.

"Because if that bus door would have opened, this man would be dead right now.

The dolly incident came after McGregor was stripped of his UFC lightweight title because he declined to defend it and chose instead to fight a lucrative boxing match against Floyd Mayweather, which he lost.

McGregor, who owns a 21-3 record in UFC and is a former champion at featherweight and lightweight, predicted his first fight in the octagon in two years would be a short one.

"I believe one," McGregor said when asked how many rounds it would take to dispatch Nurmagomedov, who he called a "rat".

The undefeated Russian was the calmer of the two during the press conference, never raising his voice or getting out of his chair as McGregor tore into him and his family between plugs for his whiskey. 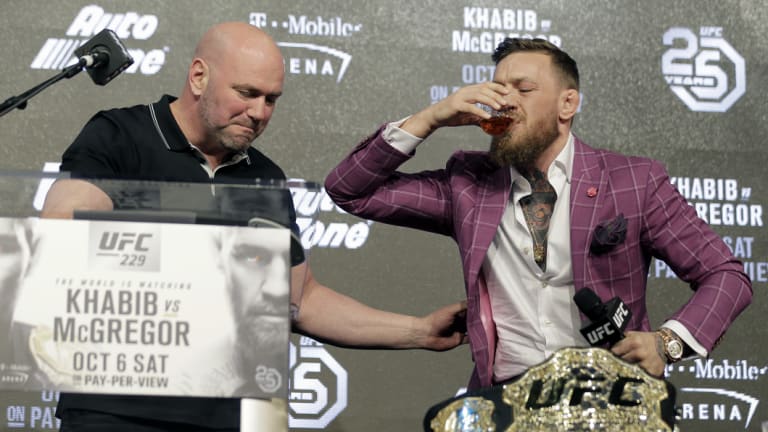 Promoter: McGregor was up to his usual tricks in front of the cameras.

"I don't know what this guy is talking about. I don't understand what he's going to do," said Nurmagomedov, who defeated Al Iaquinta by unanimous decision in April to claim the title.

"He thinks whisky is going to help him?" asked the devout Sunni Muslim, who declined McGregor's offer of a glass of the spirit. "I don't understand."

The fight will be held on October 6 at the T-Mobile Arena in Las Vegas.