The easy option for Josh Reynolds would have been to sign with Cronulla. They wanted him. He already called the Shire home. There was a golden opportunity to join a star-studded roster that was more than capable of winning another NRL title.

It made sense that the Cronulla club was about to roll out the black, white and blue carpet for yet another larrikin. There were conversations with coach Shane Flanagan. Even his old mate from the Bulldogs, Mick Ennis, did his best sales pitch. 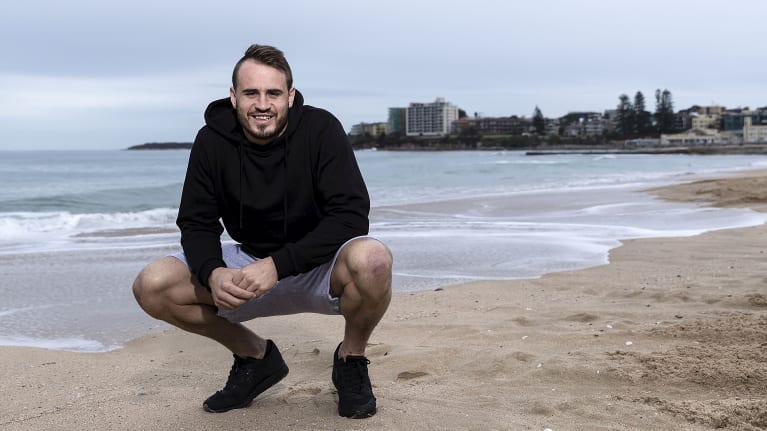 Tough choice: Josh Reynolds turned down the beaches of Cronulla to join the Wests Tigers.

So what on earth possessed "Grubby" to pass on the Sharkies for the Wests Tigers? Sure, there were 3.2 million reasons to ink a deal for four years. But Reynolds said there was so much more to it than cash.

"The Tigers were a new challenge," Reynolds told The Sun-Herald as he prepared to play against the Sharks on Sunday afternoon.

"My last year or two at the Dogs, I was only playing thereabouts. I wasn't really happy with where I was at, and I felt if I had gone to the Sharks, I could have got away with plodding along and playing OK.

"This sounds weird, and I've had a laugh with Ivan [Cleary] about this, but I could play terribly for the Dogs, score a try late and we win the game, and people were like, 'great game'. 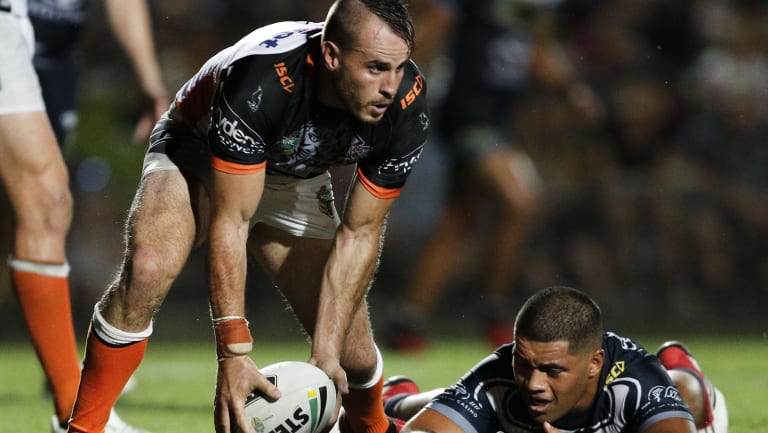 “But by coming to the Tigers, I was forced to come out of my shell and become a leader”: Josh Reynolds.

"I spoke with 'Flanno'. I spoke with some really influential people in my life like Mick Ennis, who was pushing me to go there and who had a great final two years there.

"The Sharks were a great side all over the park. They already had their blueprint to be a good team for a long time.

"But by coming to the Tigers, I was forced to come out of my shell and become a leader.

"Now I'm glad to be part of this new challenge, a part of a new culture and this place.

"I'm yet to play many games for the Tigers, but I know the club will mould me into a better player and better person.''

When Reynolds signed with the Tigers, he did not even bother to make the trek from his Shire home to Concord to check out the club's facilities.

He knew a flashy new dumbbell weighed as much as a dumbbell that had gathered dust for 20 years.

He liked Cleary's style. He also had plenty of time for Flanno.

But if he wanted to go to that next level and not ''plod along'' in a team of stars where a poor game could go unnoticed, Reynolds needed to come to the Tigers – a team, he says, that ''has no egos, no superstars, just a bunch of blokes who want to get the job done''.

Reynolds has never been a superstar, certainly has no ego, and what he lacks in natural skill he makes up for with heart.

Corey Thompson, who also played with Reynolds at Canterbury, said: "He's the guy you want beside you when you're running out.

"He will always give you 100 per cent and try to lift you when you're tired.

"I didn't see him for two years after I went to England, but on the first day of pre-season training, he was exactly the same bloke.

"You can still hear him talking when you walk into the dressing room. When you're parking your car, you can hear his laugh from about 100m away.

"If you say something smart, Grubby always fires back something and you don't have a reply for him. "He never gets shitty when you give it to him. He always puts a smile on your face.''

Reynolds' infectious energy was there to see last Sunday when, in just his third game for the Tigers, he leapt high and forced Sydney Roosters hitman Sio Siua Taukeiaho to spill the ball.

The play fired up the Tigers and gave them one final crack at the Roosters.

"He was running at me all game.

"That's the sort of thing I have to do.

"It felt good. I went home that night disappointed we lost, but I felt good because I had got back into it.''

Reynolds signed for some serious money to play the very serious position of five-eighth.

But a hamstring injury paved the way for "King Benji'' to become the temporary owner of the No.6 jersey at the start of the season.

Reynolds debuted for the Tigers against Manly in round six, only to suffer a shoulder injury.

He's now played the past two games as a back-up hooker, and there are no plans in the short term to return to the halves.

Reynolds, 29, says the move has opened his eyes and, when he does shift back to the halves, he will do so with a new-found appreciation for what the men in the middle have to put up with.

"I didn't realise how tough it was in the middle, it's a real battle and so different to an edge,'' Reynolds said.

"I'm slowly learning the ins and outs, when to run, when to conserve energy. Guys like 'Rusty' [Russell Packer] and Timmy Grant have been really good for me.

"In that Manly game, I tried to do it all at once and had no energy for the little things. I got done on an inside ball because I was so stuffed.

"It's good because I think it will be good for my defence.

"I have a lot of respect for the 'tights', and realise how much work they do.''

Although a Cronulla local in recent years, Reynolds has never played an NRL game at Shark Park.

He cannot wait to rip in against the likes of Paul Gallen, the veteran Shark he celebrated a rare Origin series victory with in 2014.

Reynolds was given the flick for the Blues the next year, despite playing five-eighth in the drought-breaking side.

He was at the Melbourne Cricket Ground on Wednesday night on behalf of the NRL and could not believe the performance of former Tigers pin-up James Tedesco.

"I don't think I've seen an individual performance like that. Ever. It was like a man playing against boys. I'm mates with Teddy. I was so happy for him.''

Another mate of Reynolds, Moses Mbye, could now become the eventual owner of Tedesco's old Tigers No.1 jersey.

If the mail is right, Mbye will get a Belmore Oval farewell next weekend before arriving at the Tigers before June 30.

Reynolds has been happy to spread the Tigers love with Mbye. The nervousness and uncertainty Reynolds can hear down the other end of the phone when chatting to Mbye is exactly what he went through a tick over 12 months ago, when he was also squeezed out of the Family Club.

"He's showed this year fullback is his best position, and I think if he gets taught here by some really good people like Brett Hodgson and Ivan, who were really good fullbacks, they can turn him into one of the best in the comp,'' Reynolds said.

"He's willing to learn and will be a really good key to our spine.

"The things he's saying to me now are the same things I was saying. I told him for a few weeks it will be hard, but then you get in and muck around, crack a few jokes and everything is the same.

The Tigers caught the league by surprise when they roared out of the blocks, chalking up five wins in the opening seven rounds. The form has since dipped to the point they have dropped out of the eight.

Few will give them a chance on a Sunday afternoon at a packed Cronulla.

It's the next challenge for Grubby.