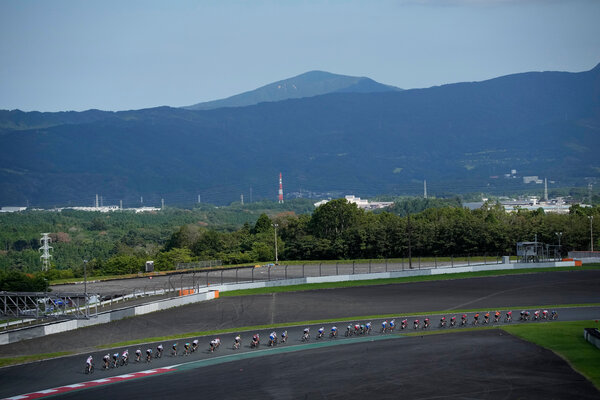 TOKYO — Six days after finishing third in the Tour de France, cyclist Richard Carapaz of Ecuador flew to Japan, battled the steamy conditions, pushed his body past exhaustion and won gold in the men’s road race on Saturday.

Digging deep for a closing burst, Carapaz, 28, broke away from Brandon McNulty of the United States with nearly six kilometers left and sprinted to the end, recording a 6:05:26 finish, comfortably ahead of the next riders.

Looking over his shoulder and seeing no one nearby, Carapaz kept pushing toward the cheering crowds at the finish line at Fuji International Speedway. With a few meters remaining, he smacked his handlebars and threw his arms into the air.

It was his first Olympic medal and only the second gold in Ecuador’s history. In 1996, Jefferson Pérez won the top prize in men’s 20-kilometer race walk.

Wout van Aert of Belgium finished 1:07 behind Carapaz for the silver medal. And Tadej Pogacar of Slovenia, who toyed with Carapaz less than a week ago while winning his second straight Tour de France, made a mad final dash to secure the bronze.

The competition, which began with nearly 130 riders, was a battle of attrition.

The brutal 234-kilometer course was made worse by intense heat and humidity. It began around Musashinonomori Park, just west of Tokyo, and ran up part of Mt. Fuji, finishing at Fuji International Speedway in Shizuoka Prefecture. In the stretches of the course outside of Tokyo, the riders wove through small towns and past fans lining the road.

In all, the cyclists were subjected to 4,865 meters of climbing, making it one of the toughest races in Olympic history.

For much of the race, the leading pack of riders was bunched up. But little by little, they began falling back through the tough final ascents. The 2016 gold medalist, Greg Van Avermaet of Belgium, dropped off with about 52 kilometers left.

Twenty kilometers later, McNulty, Pogacar and Michael Woods of Canada made their moves toward the front. Soon, McNulty and Carapaz pulled ahead. But over the final six kilometers, Carapaz was simply too powerful; he rode to the finish line alone.