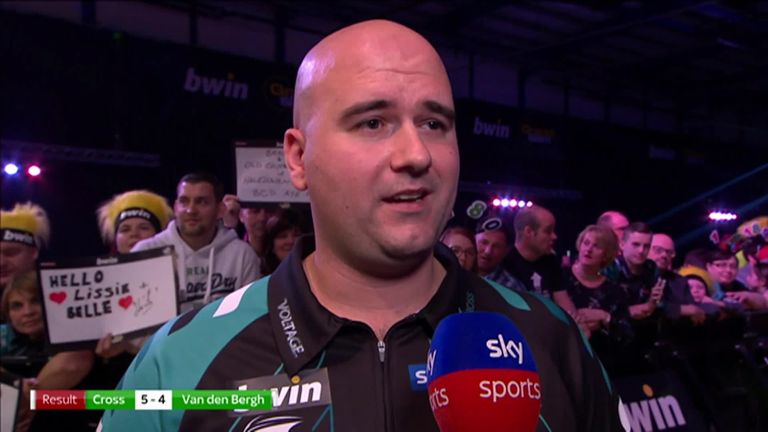 Rob Cross says he is relishing the opportunity to relax in his final group game in the Grand Slam as he aims to improve as the week progresses.

Cross became the first player to qualify for the knockout stages on Sunday afternoon, backing up his opening victory over Mark McGeeney with a 5-4 win against Dimitri Van den Bergh.

The reigning world champ hit 71 per cent of his checkouts and averaged 98.08 in the triumph.

Cross did what he had to do and is now through to the last 16. Having fallen to Michael van Gerwen at the quarter-final stage last year, the 28-year-old says he is in a good place as he aims to go further this year.

“In fairness, yesterday (Saturday) was a weird one for me,” Cross told Sky Sports after the game. “I had come out, I was very edgy. Today I felt better and as long as it keeps progressing like that, you’d never know.

“The first to five, it’s anyone’s game. You only have to slip up in one leg, they get a break and then you’re up against it. I’m really glad to be through actually. I can relax for tomorrow, come out, enjoy myself and get myself ready for that longer distance.” 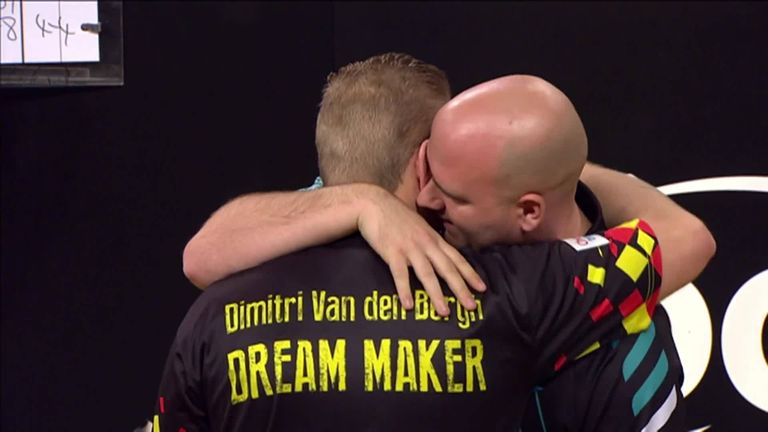 ‘Voltage’ edged what was an entertaining contest, and was full of praise for Van den Bergh but noted the Belgian star did have his chances to win.

“Dimitri played quality,” said Cross to Sky Sports after the game. “Fantastic player. The way he conducts himself – he’s a pleasure to be around.

“It was the three he missed earlier in the match [which proved crucial]. When he let me off, I made it my game. I was kind of fortunate still.”

The Grand Slam of Darts continues on Sky Sports across the week with coverage Monday’s evening session from 7pm on Sky Sports Action.

Keep up to date with the news as the tungsten enters its busiest time of year with the PDC World Championships just around the corner get all the latest at www.skysports.com/darts and join in the [email protected]